Volcán Chiles is a snowcapped volcano located in the Cordillera Occidental de los Andes, right in the border between Ecuador and Colombia. It is part of a volcanic complex integrated by other active Colombian volcanoes: Cerro Negro de Mayasquer, Cumbal and Azufral.

El Chiles is an active stratovolcano, steam vents and sulphur deposits can be found on its slopes and studies of lava flows indicate recent potential activity. There is a crater which is about 2 Km wide and open to the Colombian side. It lacks of glaciers but it has permanent snowfields on its flanks and inside the caldera. The weather tends to be cloudy and wet with occasional snow.

This mountain adopted its actual volcanic shape during the period of the Plio-Pleistocene (about 1.6 million to 10,000 years ago). Historical investigations have gotten to the conclusion that Volcán Chiles hasn't erupted in historical times. However, a non confirmed historical eruption was reported in July 17, 1936 in Colombia by Ingeominas, Scientific Organization of Colombia. 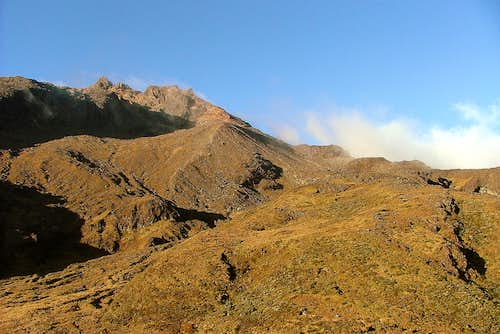 Volcán Chiles as seen from the trailhead.

A tangible proof of the volcanic activity of El Chiles are the hotsprings located at the foothills of the mountain, such as “Aguas Hediondas” in Ecuador and “Aguas Calientes” in Colombia. There's a seismological station in the Ecuadorian side that had registered recent activity.

Other nearby tourist attractions:

Lagunas Verdes. (Green Lagoons). The water combined with the sulphur that springs up from the volcanic floor, give to the lagoons a green color appearance. It is considered a stunning scenery because of the contrast of its waters and the surroundings.

Aguas Hediondas. (Stinking Waters). Very hot high-sulphur thermal baths. The stench of sulphur is so strong that it can be smelled as far as the town of Tufiño, some 4 Km away. If you choose to bathe, use the safer lower pools and not those located in the upper slopes. Many people have died by the vapor emanations while bathing in them.

Several other pools can be found in the Colombian side (Aguas Calientes). You can cross the border on a day pass to soak in the pools, but those who want to stay on have to enter via the Tulcán border crossing.

Reserva Ecologica El Angel. The only area in Ecuador aside from Parque Nacional Llanganates where the giant “frailejon” grows. It is a landscape very different from the others in Ecuador.

The road up to Volcán Chiles will take you through the northern part of the reserve which is an area completely covered by these strange furry-leafed plants as far as the eye can see. Frailejones can reach a height of 4 m / 12 ft and can only be seeing above (3,800 m / 12,465 ft).

From Quito drive northbound on Panamericana Norte to the city of Tulcán (5 ½ hours). Once there take the Tufiño-Maldonado road (it passes within 3 Km of the peak). The road starts in Calle Sierra, two blocks south of Parque Isidro Ayora. It takes about one and a half hours to get to the trailhead (34 Km), just 5 minutes after passing by “Lagunas Verdes” which are clearly visible from the road to the left side. The trailhead starts at the highest point of the road to the right (there's a TV transmission tower and a concrete house on the hill). Volcán Chiles can be seen to the right side of the road in a clear day.

From the trailhead, or concrete house (4,100 m / 13,448 ft), start hiking straight up in northeast direction, cross/walk by a shallow lake, then follow the stream up by a shallow ravine. It'll take you up to the base of the southwestern ridge which steepens as it gains altitude. 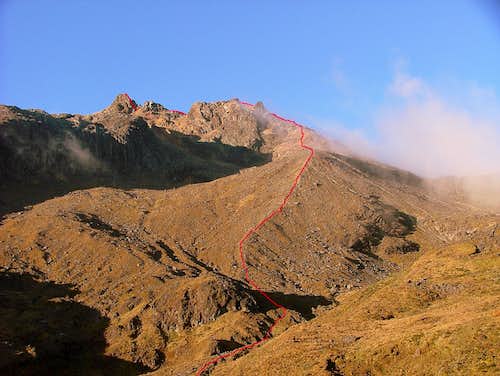 Volcán Chiles Topo Photographic Map.
The route up by the ridge passes by a couple of scree fields and it's fully cairned up to the summit crater ridge. As you round the bend of the summit ridge, the main summit comes soon into view to your left side. A 3rd Class-scramble is necessary to reach the summit.

It takes about two and a half hours to reach the summit from the trailhead. No rope is required.

Weather within the summer months of June and December tends to be more pleasant for climbing in Ecuador. Clear mornings and cloudy afternoons are common in the mountains and highlands. However, cold temperatures should be expected in the northern Ecuadorian highlands such as those from “Paramo de El Angel”, which is very well known for its foggy conditions and extremelly low temperatures.

A hazy cold day in the chilly highland city of Tulcán (3,000 m / 9,840 ft) is one of the main characteristics that makes the provincial capital of El Carchi famous (after the cemetery and its topiary garden). It is said that the sun rises up every morning wearing a woolen poncho in Tulcán. The temperature rates between 2 °C to 11 °C (35 °F to 52 °F). 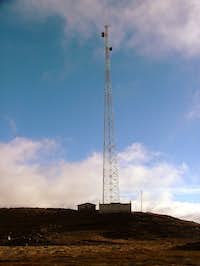 Concrete House and TV transmission tower.
There are plenty of places where to set up a tent and to camp in Volcán Chiles and its surroundings. A couple of them are located near the trailhead:

The concrete abandoned house on the hill offers good weather protection against wind, rain and snow as well as a great view of the mountain and the other peaks to the south. It has a door with a latch in the inner side of it, which prevents strangers to come in while you are sleeping.

Near the shallow lakes below the concrete house. A gap in the mountain ridge, partially covered by the wind and with a good source of clear water coming down from a nearby stream.

Other optional campgrounds are: Lagunas Verdes and Aguas Hediondas. No fee charged.

As May of 2014, Volcan Chiles is potentially active. Yellow Alert is in effect since May 1st,
There is a military checkpoint before Tufiño. You'll be asked for a proof of identity, so carry your passport with you.

Ask locally about the safety of travel in this remote border region. Due to the conflict in Colombia, there'd be times when traveling may not be advised.

Graffiti have marred the walls of the concrete abandoned house near the trailhead. It's been vandalized by gangs and used as a cave for drug/alcohol consumption. It is advisable to don't leave items unattended, to travel in large groups and to latch the door during the evening hours.

There are other buses leaving every couple of hours to Tufiño but they only will take you have way the trailhead. If you don't get in the bus to Maldonado, and don't want to spend the night in Tulcán, take the bus to Tufiño and either hire a truck up to the trailhead or walk (5-hour-walk).

IGM 1:100,000 Tulcán topographic maps are available at Instituto Geografico Militar (IGM) in Quito, and must be bought personally.

Special thanks to andreeacorodeanu for your help in the making of this page and for the adventures shared in Colombia and northern Ecuador. Uffh! We were close, I'll remember it :).