The Illinizas are two mountains that hold the 6th and 8th highest Ecuadorian peaks titles, Illiniza Sur (5,263 m / 17,267 ft.) and Illiniza Norte (5,126 m / 16,818 ft.) respectively. They used to be one whole volcano featuring a crater, but eventually split up in two. These peaks are located 55 Km south of Quito, the capital city of Ecuador, in the Occidental Andean range. 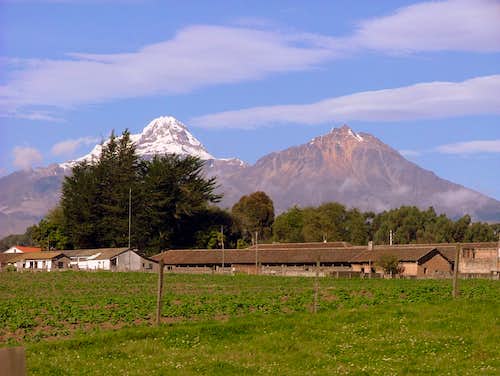 
It is said that Illiniza Norte (North) is known for being less difficult to climb than its neighboring peak Illiniza Sur (South). Indeed, Illiniza Sur is advised for experienced climbers with knowledge on technical gear and its use on steep snow/ice ramps, while for the former the deal is good hiking and scrambling skills.

However, Illiniza Norte can feature snow/ice conditions from time to time too, turning this rocky peak into a technical one and a real challenge even for experienced climbers. In this case climbers may need at least and ice axe and maybe crampons and a rope. Wearing a helmet at all times is a must.

In the last couple years an inordinate number of even the most experienced climbers have come to grief while climbing this mountain. It seems that overestimating their skills and underestimating the difficulty of the climb is one of the main causes of unfortunate mishaps in the mountain, especially under snow/ice conditions. Rescues and body retrievals have become very common lately, especially on those peaks considered not difficult as Illiniza Norte and Rucu Pichincha. Caution is highly advised.

Other than that, Illiniza Norte is a beautiful peak which offers great hiking and scrambling routes to visitors as well as stunning views of the surrounding mountains and valleys of the Ecuadorian Andes. A suitable peak for those in the way to good acclimatization.

From Terminal de Buses Quitumbe (south of Quito), take one of the several buses that leave to Machachi. There are only two bus companies that offer their service to Machachi, Transportes Mejia (green) and Carlos Brito (purple). You'll need to get off the bus at Mercado Central de Machachi. 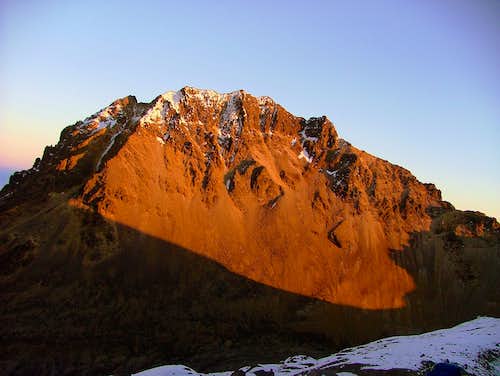 Once in Machachi, take another bus to the town of El Chaupi (blue-and-white buses signed “El Chaupi”). They leave every 30 minutes from the Market’s corner. The best spot to catch a ride is at “Supermercados TIA”.

The statue of a woman milking a cow will let you know that you've arrived to El Chaupi (13 Km-bus-ride on a cobbled road, well actually half of it has been paved). From El Chaupi continue on a very well signed road towards the Illinizas parking lot at 3,900 m. (La Virgen, there's a small shrine to the virgin) which is about 9 km away.

From La Virgen Parking Lot (3,900 m / 12,792) follow the well-marked and signed trail that ends up at the northern moraine ridge of Illiniza Sur, 2 hours after leaving from the trailhead. Another trail continues up switch backing by the steep/sharp scree ridge.

Follow this ridge up for about 30 minutes - 45 minutes until the trail splits to the right (west) taking you to the Nuevos Horizontes refuge which is clearly visible from the upper part of the ridge.

There are two ways of getting to Los Illinizas: 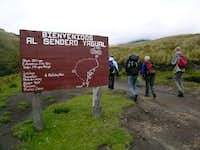 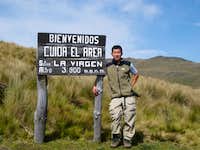 Transportation to La Virgen Parking Lot can be arranged at Refugio Los Illinizas Office located at the north side of the park in the town of El Chaupi or in La Llovizna Lodge. Their rates are USD. 10.00 one way (40 minute-ride).

Transportation from Machachi is not so recommendable, their rates are about USD. 25.00 one way and their service isn't efficient.

Transportation from Quito can be arranged in travel agencies for USD. 80,00 per day.

 Starting Nov.12 2012 nobody is allowed to climb any glaciated mountain in Ecuador without hiring an accredited mountain guide. This restriction was issued by Ecuadorian Goverment after the last fatal accidents that happened in 2012 in Illiniza Sur and Norte. It includes climbing Illiniza Norte as well.

Reserva Ecologica Los Illinizas entrance fee
 There are not fees for National Parks and Natural Reserves at the moment.

Meals can be purchase at the refuge for USD. 7.00 each.

Once at the refuge continue hiking up towards the saddle. You’ll find two small rocks that have been marked with the words “Norte” and “Sur” in order to set visitors into the right path. It takes less than 10 minutes to get to the saddle between Illiniza Norte and Illiniza Sur. From there start your way straight up by the rocky Southeast ridge. 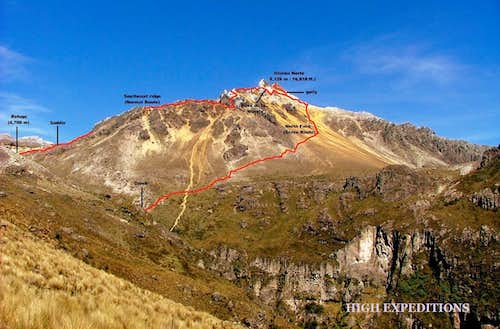 There’s a short variant of this route a few meters below the ridge (sandy scree) which can be used by the descent or in case of extreme windy conditions high up on the ridge.

The trail by the ridge could be well beaten depending on the climbing season. Always keep your way up unless you find a few steep sections to negotiate. You’ll get to the base of a false summit where you may need to make a traverse to the north. After traversing and going down a bit, you’ll find yourself at Paso de la Muerte (Pass of Death). This is a steep rocky gully that can be easily negotiated with caution, especially if there’s some ice/snow on it. Keep traversing all the way north below the true summit which can be seen right above. A last steep gully should be climbed in order to access to the last short traverse, located a few meters below the summit, which is marked with an iron cross. The final Class 3 scrambles to the summit are easy, (depending on conditions).

Please note that the rocks up there are very loose, so it’s highly recommendable to keep yourself on the track, in order to avoid knocking off rocks to the parties climbing up below. All of the last accidents in 2011 (some of them fatal) have occurred here while taking shortcuts to the top or on the way down.

You can go back to the refuge by the same route you came up, or by the All Scree North Route (faster descent) if you are planning to go straight down to the parking lot and didn’t leave any of your belongings at refuge.

This route starts a few meters before getting to the sharp scree ridge that takes you to the refuge. The trail can be seen clearly from the base of this ridge, heading north towards the creek. You’ll be hiking diagonally up on very steep loose scree until gaining the north east shoulder of Illiniza Norte. Once there, the route continues up by steep rocky sections until it joins with the normal route right below the summit pyramid, at the last steep gully. This route recommendable for the descent or if the conditions up on the southeastern ridge aren’t favorable (Normal Route).

For both routes, it takes 3 - 4 hours to reach the summit from the refuge or from sharp scree ridge. 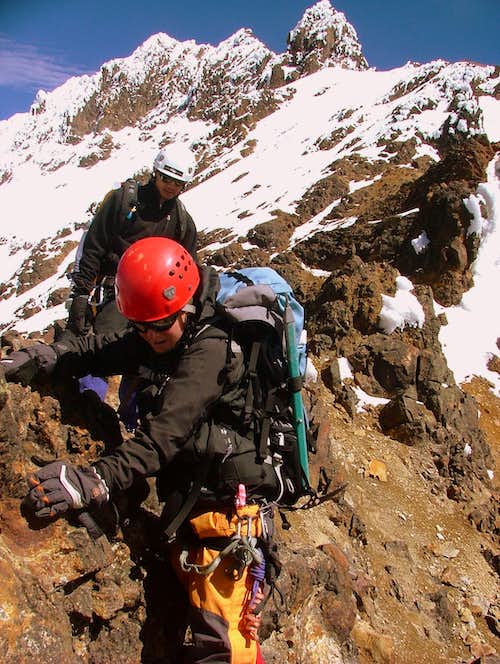 Although you can climb in Ecuador year round, the best time to climb in Ecuador are during the dry months of December, January and February. But sometimes this dry weather in these tropics is a joke, since it can change anytime. Anyhow, it rains less in the mountains during those times. June, July and August may be good months to climb too, but windy. 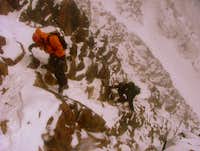 As I said, Iliniza Norte does not have permanent snow fields, but it can receive amounts of snow that can make the climbing a bit harder than when dry. If no snow is present on the mountain, the normal routes can be climbed at any time of the day. However, caution must be observed and early start is needed if there is snow present, since conditions can deteriorate later during the day.

A general comment: In the tropics, glaciers and snow conditions are quite different than in, for example a maritime, temperate glacier from the Alps or the Cascades. Cycles of freeze-melt-freeze will happen almost every night-day-night. So, given the dry weather, it is possible to access the area any time of the year.

The deal here is that the sun will warm up your snow and it will become an ice cream slowly melting. Crossing snow in these conditions can be very demanding, and besides the danger of avalanches increases when the top layers get wet and heavier, not to mention the snow bridges getting weak and other classical dangers. As in the Alps, aim for an alpine start, so you will be back for lunch.

Of course, Iliniza Norte does not have permanent glaciers or snow fields, but care must be taken if the climb involves snow or ice. Please ask about mountain conditions at the refuge or in Llovizna lodge in the town of El Chaupi.

The Nuevos Horizontes refuge is located at 4,700 m (15,416 ft) at the norther flanks of Illiniza Sur. It is considered the smallest high altitude refuge in the Ecuadorian Andes. Strategically built right on the saddle between Illiniza Sur and Illiniza Norte, it is the best option for those who want to push for the 6th and 8th Ecuadorian highest summits respectively, as well as for acclimatization purposes.

Inside the refuge. Liba Hardekopf 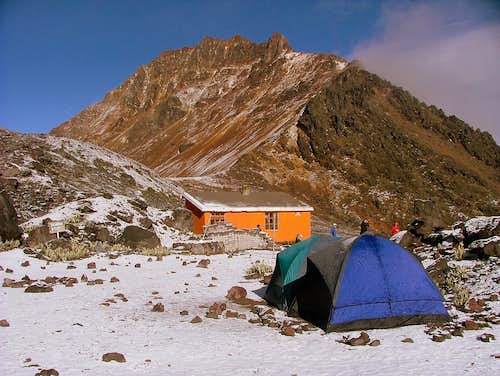 The refuge is being renovated by the new administration staff (Fernando Iza and Juan Pablo Vargas). Bunk beds, mattresses, table, kitchenware and even toilets have been replaced for new ones. Projects of extending the refuge facilities are being considered.

One of the best places to spent the night at, with warm bedrooms and hobbit-sized garret rooms, fire places, kitchen, Tv and ping pong table. Many of the parties and climbing teams start their ascension to Illiniza Norte from here. Its owner, Bladimir Gallo is the ex-manager of the Nuevos Horizontes refuge. He can arrange 4WD transportation up to La Virgen parking lot as well as guided hikes, climbs and horses.

A few meters beyond the parking lot, there's a flat area which can be used as a potencial campground. Water is available at a nearby stream below the creek. Many parties start their ascension to Illiniza Norte and Sur from this area. Is not recommendable to leave your items unattended while climbing.

Located at the eastern side of the Nuevos Horizontes refuge. By setting up your tent here and paying the USD. 5.00 fee (per tent), you are entitled of using the refuge's facilities; kitchen, restrooms and water.

There's an optional campground just 50 meters beyond the refuge at the foothills of Illiniza Sur. It is located right next to a green lake in a flat area. No fees charged.

For more information about camping and the refuge, click here.

The maps can be found at Instituto Geografico Militar (IGM) at El Dorado, Quito. They are about 4 US Dollars each and you must buy the maps in person.

I am providing a grid system for the maps, using the distribution that the IGM uses (below). Use this grid to get your maps.

Omnimap also sells the maps in the Unites States, but for about 14 Dollars each. In spite of the high price, they take their time to get the maps, so if you need them ask them with enough time (2-3 months or more)