Slocomb's Rise is a satellite peak to the south of Mt. Colonel Foster between the South Col of Foster and Elk Pass. Named for Alfred Slocomb a surveyor who made the first significant ascent of Mt. Colonel Foster to the South-East Peak in the 1930s. Whether or not the feature warrants separate distinction as a peak is debatable, looking at the overall topography of Mt Colonel Foster it is essentially just a high point on the ridge system encircling the south side of the greater massif.

Nevertheless Slocomb's Rise is worth a look because of the dramatic views of the surrounding peaks, the outstanding climbing nd scrambling routes on its flawless rock and its (under-used) utility linking Mt Colonel Foster's south col to Elk Pass.

Best approached up the Elk River Trail from Highway 28. Follow the ERT all the way past the Butterwort Creek campsite and the Gravel Flats camps its to the open rock slabs alongside Landslide Creek. From the open rock alongside the creek the skyline profile of the Suspension Ridge and Slocomb's Rise is seen above.

To reach the top by the easiest route leave the Elk River Trail at the rock slabs following the route to Elk Pass through the upper Elk Valley. From the tarns just below Elk Pass hike up the easy south-east flank.

The Suspension Ridge is the obvious high rocky ridge system bounding the south side of the Landslide Lake cirque adjacent and linking to Mt Colonel Foster. It is one of the most outstanding alpine features on Vancouver Island with a very long, moderate scramble through the Island's most dramatic alpine terrain. The flanks of the ridge on both the south side overlooking Elk Pass and the north side above Landslide Lake have significant climbing potential as well - notably the Gambler's Bluff, with many more new route options. 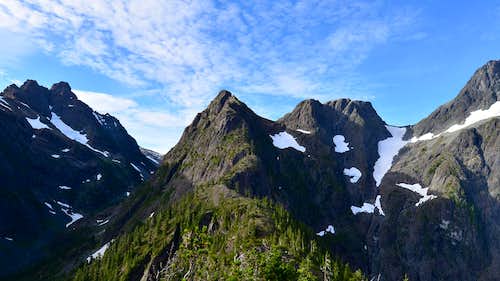 There are two main options for accessing the Suspension Ridge directly. The first line leaves the upper Elk River Trail just a few hundred metres past the turn off from the main Elk River Trail at the rock slabs. leave the trail and head uphill through the forest in the direction of the ridge. A band of rock cliffs bars progress so traverse under these to the left (east) until the base of an incredible gully ramp feature is located. Head up this ramp to a series of forested benches. Weave up and right and then back left to break through the treelike and into the open alpine terrain at the end of the ridge. Keep to the crest of the ridge along a relatively flat stretch. Immediately above the first obvious step is a cluster of small ponds, the last good camp and relabel water on the ridge for some distance.

The route along the ridge crest from here is a mix of 4th class and low 5th class (up to 5.7 in a few spots). The exposure and views of Foster Lake, Rambler Peak and the massive east face of Mt Colonel Foster is outstanding. There are three crux steps. Once on the upper ridge the difficulties ease to 3rd class and then easy mountain walking terrain all the way to the top and the descent down the southeast flanks into the upper Elk River valley.

Camping along the Elk River Trail is only permitted at the designated sites at Butterwort Creek (6km in) and the Gravel Flats site (~10km in). The Gravel Flats camp is the most useful base for a day trip to the summit of Elkhorn Mountain South. Backcountry camping within Strathcona Park must be more than 1km from a road. Otherwise the considerations are as for all backcountry overnights: practice strict leave-no-trace, don't flag or otherwise mark any hiking routes and remember that no fires are permitted in Strathcona Park backcountry at any time of year regardless of the Provincial Fire Ban status.