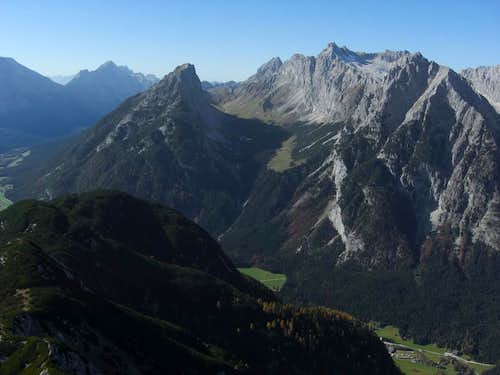 If you enter Leutasch valley coming from Mittenwald you will soon recognize three huge mountains bordering that valley to the northwest: Hohe Munde in the background, Öfelekopf in the foreground and between them Gehrenspitze.

Please note that there is more than one Gehrenspitze in the Alps, most notably a lower, identically named peak in the Tannheim Alps. Our Gehrenspitze is part of the Wetterstein mountain range.

Gehrenspitze shows an impressive, huge and perpendicular north face down to Puittal, towering nearly 1300 meters above Leutasch valley ground. The east and south sides are not so steep but equal impressive with rocks faces, meadows and a huge dwarf pine zone. Gehrenspitze west ridge borders Puittal to the south and west, connected with the Wetterstein main range at Scharnitzjöchl.

There are several easy hiking routes to the summit, most of them using the west ridge in the end to reach the summit cross. Gehrenspitze is well known among local hikers and guests, you will not be alone on that mountain on sunny days. Even late in the year, Gehrenspitze is one of the most frequented late autumn summits I know. Nevertheless a late October or November tour on Gehrenspitze will be not as crowded as it will be in June through September. 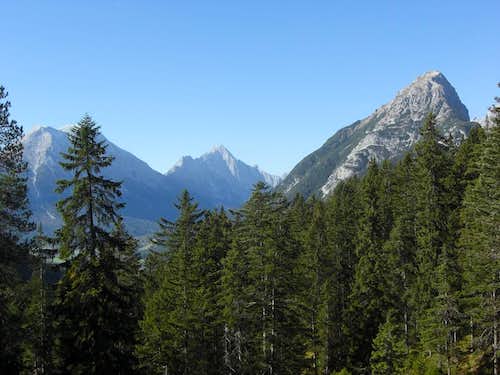 Gehrenspitze (right) as seen from Arnplattenspitze ascent with Hohe Wand

There are three trailheads for Gehrenspitze, all located within Leutasch valley:

See the map in the "Routes Overview" section for detailed information. 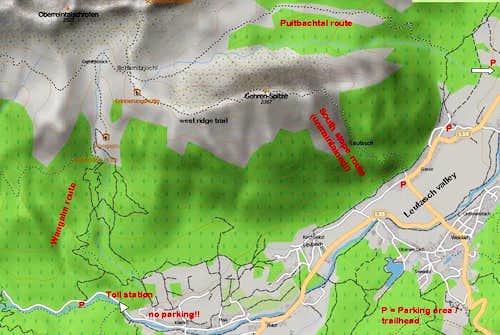 Cross the Gaisbach toll road and ascend on a forest road in northern direction. Take the right hand forest road at a road junction. Follow that old forest road up to a new one, ascending from your right to your left. Either follow that road or take the steep forest track to your left to shortcut some switchbacks. Enter the Klammbach valley on the forest road.

If you start at Leutasch – Klamm (no parking area!!) you can use marked trails and forest roads east of Klammbach valley up to Wangalm, too.

At Wangalm follow the trail ascending to the south cirque below impressive Schüsselkarspitzen, there is a huge natural memorial stone for those killed in a climber accident.
Follow the trail to your left and ascend steeply up to Scharnitzjöchl. 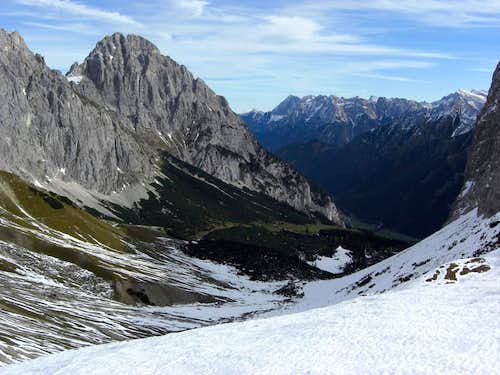 Arriving at Puitbach creek a trail branches off the forest roads in western direction, first zig-zagging up the steep forest slopes quite close to the Puitbach.

Once beyond the forest, you enter a beautiful Alm meadow. The trail ascends the meadows between towering Gehrenspitze north face and sun bathed south face of Leutascher Dreitorspitze and Öfelekopf. Follow the trail all the way up to Scharnitzjöchl. Turn left on the west ridge trail as described above. 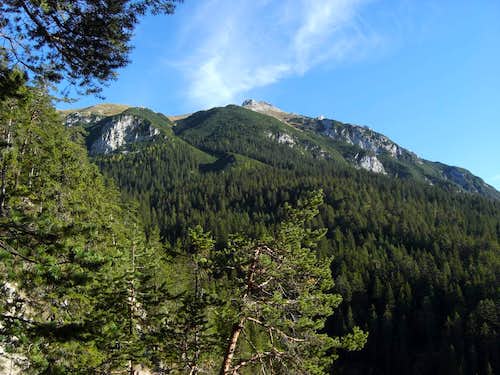 from Leutasch-Gasse via Lehner Berg

Please note that this route is no longer maintained and marked! User aki, first author of this page, records already for 2008 that the trail has been officially closed, all markings have been painted over and trees block the path at times in the forest.

Starting at Leutasch Gasse at the rectangular bend of road number L14 follow short road in northern direction until it ends at a parking space for a nearby hotel. Turn shortly left on the forest road until you recognize a barely visible trail entering the forest to your right. There you will see some stone steps, too, leading into the forest. This is the starting point of the South slope trail.

Ascend on that trail up the forest until you enter a gully system at about 1500 m. Follow that gully until you reach the east ridge of Gehrenspitze. Along the ridge there is a cairned trail which leads directly to the summit. 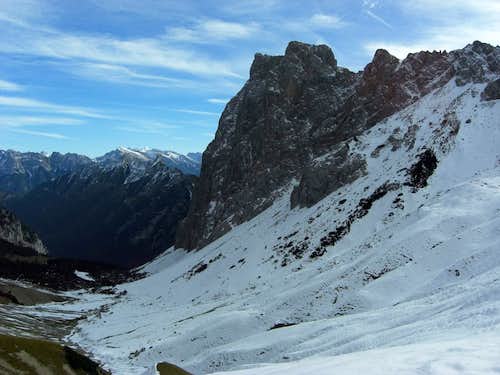 Gehrenspitze is not only geographically separated from all main ridges of the area. Geologically Gehrenspitze leads a separate live, too.

South of Wetterstein main ridge and north of Gaistal and Leutasch there is a chain of mostly secondary summits, separated from the main ridge by grassy cols and separated from each other by cirques and steep creek valleys.
This part is called Vorbergzug. Gehrenspitze is the main summit – and frankly said the only summit which deserves to be called a true summit – of this Vorbergzug.

Between Vorbergzug in the south, build up of Wettersteinkalk, a green algae reef limstone, and Wetterstein main ridge, consisting too of Wettersteinkalk, you will find different limestones and marls in different colours: brown, grey, green even red.
You can study these rocks around Scharnitzjöchl. These are younger sediments of jurassic age, folded to several narrow synclines and anticlines between the two Wettersteinkalk massifs and marking the limitation of two huge tectonic units of the northern limestone Alps: Lechtal nappe (Wetterstein mountains) and Inntal nappe (Mieming range). 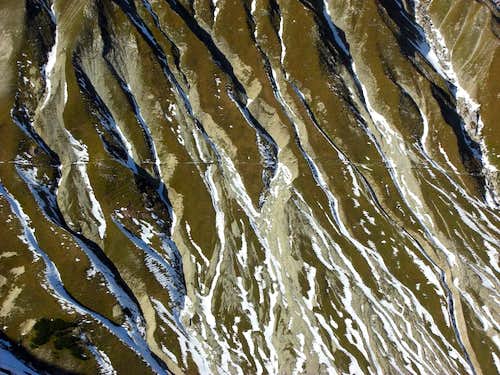 This zone of intensely folded rocks is called Puittal zone (after Puittal valley east of Hochwanner). You will best recognise the intense red coloured Radiolarit of jurassic age, a hard stone which consists of millions and millions of monads with silica shells. 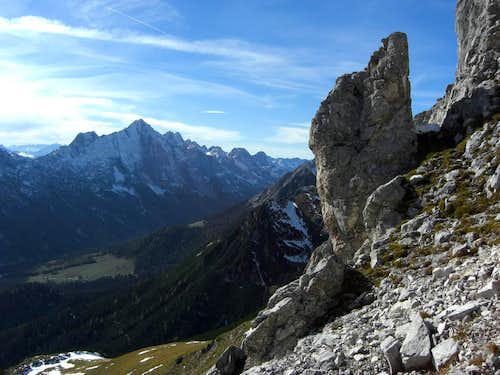 You should pay the toll road fee even if the cash point is closed (end of September), there is a pay machine at the beginning of the toll road. There are daily checkups and heavy fines!

You will find all kind of accommodation throughout Leutasch valley. 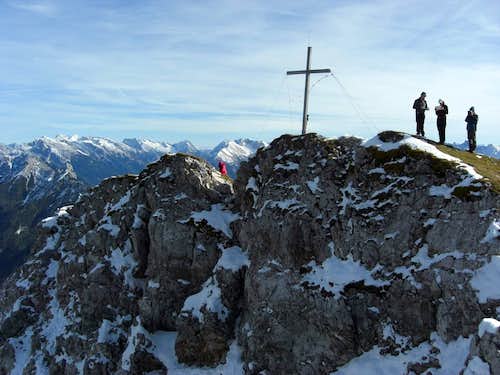 Gehrenspitze is mainly a summer and autumn hiking summit.

The west ridge of Gehrenspitze has some rocks to overcome but nothing really serious.

You need normal hiking gear and good shoes for the official normal routes.

The condition of the south slope route cannot be predicted as this route is officially closed.
I did this route twice in the 1990 years; it is a steep and rather exhausting route; I will nowadays recommend the Wang Alm or the Puittal route. 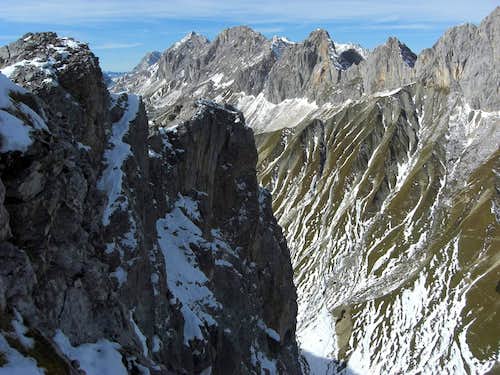 Tour description from Steinmandl.de (in German)

GPS Track for ascent from Leutasch-Gasse (not tested)