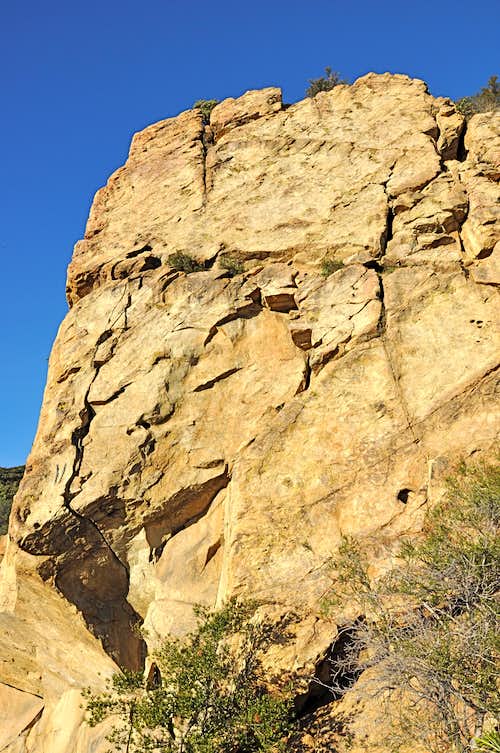 Not to be mistaken for “The Rock of Gibraltar” and located in the Rattlesnake Canyon, Gibraltar Rock is the most prominent formation in Santa Barbara’s back country.

If you started climbing in the Santa Barbara area, chances are that the front face, south face, of Gibraltar Rock was your first climb. Gibraltar Rock is located right next to Gibraltar Road and easy access and an abundance of easy routes makes it the most desirable formation for beginner climbing classes. On any clear weekend you can see many ropes hanging down the south face, and shouts of encouragement abound. University of California in Santa Barbara’s Outdoor Adventure program holds regular rock climbing classes on this rock. However, this 90 to 140 foot formation has a lot more to offer than easy climbs. There are many challenging climbs on the west face. One in particular is on the south west corner called “The Nose.” The Nose is an overhanging crack rated at 5.11a. Another extremely popular hand crack called “T-Crack, 10a” is on the west face of Gibraltar Rock.

In addition to the main Gibraltar Rock, there are a number of subsidiary formations in the same vicinity with numerous moderate to difficult climbs. The most important of these formations are:
Upper Gibraltar Rock with bolted and gear climbs.
The Bolt Ladder, used for practicing aid climbing. There are also free climbs on this formation.
Toxic Waste Wall with all bolted sport climbs.
Sweating Buckets Rock with one 11c bolted climb.
Hole-in-the-Rock used for top roping.
Crank Start with one 11c bolted climb.

There are at least two different ways to approach the west face.

1- Via the Peanut Gallery: Walk and scramble on the north side of the main formation to reach a short steep gully. Down climb this gully to the Peanut Gallery which is roughly half way down the east face. There are two bolts on the ledge for rappelling to the base or belaying and top roping. 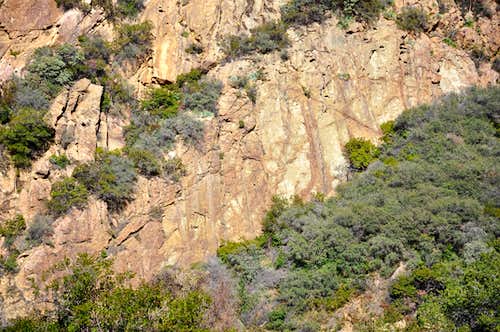 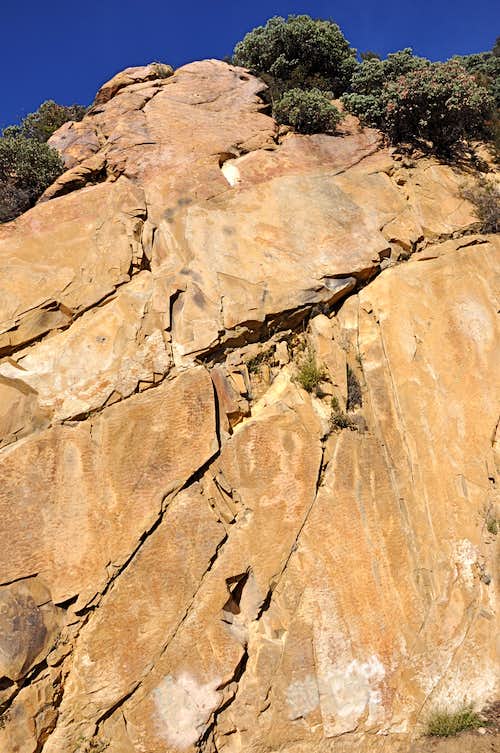 Some one hundred feet to the right of “Bolt Ladder” you will see a steep path, with a rock face on the left and heavy brush on the right, going up the hill. Take this path to the base of Toxic Waste Wall. The first bolted face you come to will be the first of several bolted climbs here. 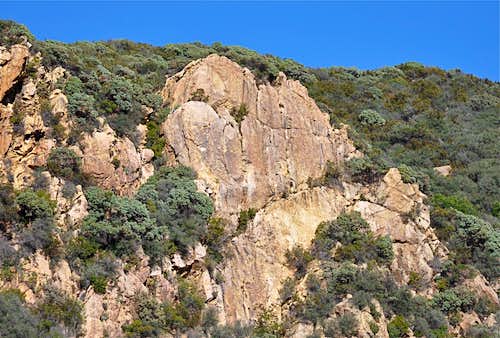 Upper Gibraltar Rock is visible from a few hundred feet before you reach the Toxic Waste Wall. Across from the main formation you can locate “Hole -in-the-Rock,” a small formation about 30 feet in height. True to its name, it has a distinct hole in it. The trail to Upper Gibraltar goes past this formation and continues to a fire road. Walk down this fire road to reach the top of Upper Gibraltar. Most people rappel down this formation to the base from here. The base can also be reached by scrambling down the side. Another approach to the base can be made from the base of the Toxic Waste Wall. 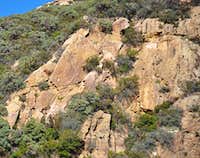 How to get to the area & Red Tape

From Highway 101 take the Las Positas off ramp. For those coming from the south turn right; for those coming from the north turn left. In either case, drive toward the mountains to the north of Santa Barbara. Continue up Las Positas for .85 miles to State Street, where the name of Las Positas changes to San Roque. Continue driving straight toward the mountains until you come to HWY 192 (Foothill Road) in another .5 mile. Turn right at the intersection and continue up Foothill Road for 1.9 miles to its intersection with Mountain Drive. Turn left onto Mountain Drive and drive for .5 mile to its intersection with Gibraltar Road. Gibralatr Rock is about five miles from this point. You will recognize Gibraltar Rock located to the west of the road when you begin to see a large sandstone formation immediately to your right (east side of the road). This formation is “The Bolt Ladder.” Gibraltar Rock is a little further up the road and to your left. There are ample turnouts for parking between here and the next two turns in the road.


Red Tape:
There are no permits required to climb on Gibraltar Rock or any of the subsidiary formations. However, the forest service requires a permit for entering the "High Impact Areas." Gibraltar Road is not considered as High Impact Area, however, you may need one for camping or parking in the areas designated as such. For more information on such areas, please contact the Santa Barbara Ranger District, 805-967-3481.

Unfortunately, there are no campgrounds close and convenient to Gibraltar Rock.
However, there is one very large and well developed campground at Cachuma Lake, and a few less developed ones along Paradise Road off Highway 154. There are also a few campgrounds along Highway 101 at El Capitan State Park and Refugio State Park.

There is an excellent guide book by Steve Tucker and Kevin Steele called Climbing in Santa Barbara, Ventura and San Luis Obispo. Beside giving complete information on the routes, it presents valuable historical information. 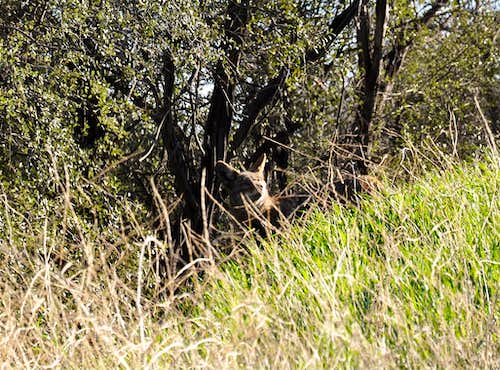 This may be a "Red Wolf" sighted by myself very recently.

The wildlife in the Santa Barbara back country is varied and thriving. We have the usual suspects: bears, coyotes, bobcats, deer, rabbits and variety of birds are ever present. For the past couple months there have been mountain lion sightings, and I personally saw what I think was a red wolf.