Goosenecks State Park is one of the least developed properties in the Utah State Park system. It is located in southeastern Utah.

The Park has just one extended viewpoint of several huge river bends, flowing in a deep canyon with a series of stepped cliffs and terraces. Beyond the visible meanders, the river continues to twist and turn as the canyon deepens, before joining Lake Powel after about 35 miles.

Visitors can park just a few feet away from the cliff edge and gaze down onto the river far below. Until the moment you step out of the car you really can’t see anything but then suddenly the ground just opens up and you get the most magnificient views of the canyons below! It is one of the places I keep coming back to - a geological wonder.

Goosenecks State Park offers spectacular views of winding San Juan River 1,000 feet below. Over a distance of one and half miles, the San Juan river flows for more than 6 miles through the twists of the entrenched meander. The goosenecks are series of tight loops made by the river. (The photo above is hard to catch - expect to get only one of the twists into a regular camera).

The park offers great picnic areas, primitive free camping, incredible views and expansive star gazing. There is no river access in the park, but there is an unmarked trail leading down to the river - Honaker trail a couple of miles west from the park.

You can also drive east (left) along the cliff on an initially good dirt road for about 1 mile, after that the road becomes rough (high clearance vehicle needed), and after about 1/2 miles you reach the end of the rock peninsula and have views of the river below. This area provides more solitude and you can camp here. There are several points you can scramble part down, but no established trails, and cliffs prevent you from reaching the river.

Climate: Goosenecks State Park lies at an elevation of 5,100 feet. The climate is arid with less than 15 inches of precipitation per year. Summer days are usually hot with temperatures reaching 90 degrees F or more and night cool to 65 degrees F. Winter can be very cold and snowfall does occur. Expect daytime temperatures to reach 55 degrees F and nighttime temperatures to drop to below freezing.

How Were the Goosenecks formed?

The San Juan river originates in the San Juan Mountains of Colorado, and many millions of years ago flowed gently across a flat landscape, forming large meanders that frequently changed position. Uplift associated with creation of the Colorado Plateau caused the river gradually become entrenched, preserving its most recent course in the deep canyon seen today. The rocks forming the sides of the gorge are shale and limestone from the Paradox Formation and the Honaker Trail Formation, up to 300 million years old.

Geologists Love the Goosenecks - The Goosenecks of the San Juan river often appear in geology textbooks as a classic location for observing entrenched or incised meanders. The canyon walls reveal the 300 million year old rocks. Near the Goosenecks Park is the Honaker Trail, which leads down to the river. It was along this historic trail that early detailed studies were done on the Pennsylvanian period limestone, and is known as the Honaker Trail Formation, a rock layer laid down in the Pennsylvanian period. Under the Honaker Trail Formation lies the Paradox Formation. Geologists are interested in Paradox layer because rich amounts of oil have been found in this layer of rock in other areas. 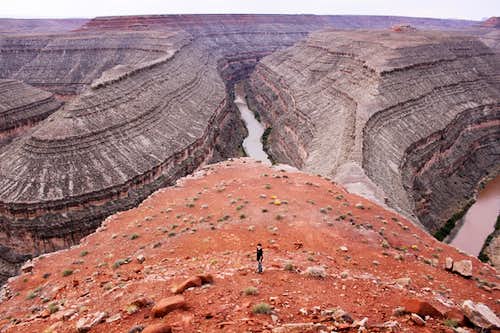 The small town of Mexican Hat has a population of roughly 70 people, don't expect much in the term of services. Bluff is not that much bigger.

There is no public transportation. The closest large airports would be Salt Lake City, approximately 350 miles away.

There are no official/established trails at Goosenecks State Park and it is not easy to climb down to the river (I always got cliffed out). You encounter cryptobiotic soil on your explorations, so mind your step, and watch for rattlesnakes.

Honaker Trail - this is a historic hiking trail located near Goosenecks State Park. It was built in the late 1890s as a supply route for gold prospectors. However, the route proved too rugged even for pack animals. Besides, the gold rush was short lived in this territory. The trail is a mixture of steep switchbacks and traverses along the cliffs. It is 2.5 miles (4.0 km) one way and connects the river with the canyon rim over 1,200 feet (370 meters) above. It is very popular with geologists, the trail serves as the type locality for the Pennsylvanian Honaker Trail Formation.
The trail is described as strenuous and it is exposed to sun, no shade, plan accordingly. Bring plenty of water, the river below flows through some red rock formations and does not appear very appealing as a drinking source.
The trail is named after Henry Honaker, who worked as cowpuncher. He later ran a local stage route and superintended the building of Honaker Trail.
Geology around the trail: As you hike down the trail, you will see numbers painted on the wall. The numbers are declining as you are approaching the river. These numbers were painted by geologists in 1952 in preparation for a major field symposium conducted along the trail. They describe different geological layers (not distance from the river!)
Distance: 5 miles round trip
Elevation: 5160 feet to 4150 feet
The trail is well described in Hiking the Southwest's Geology by Ralph Lee Hopkins.
Finding the Trailhead: As I  mentioned above, there are no signs for this trail, so come prepared. Follow the same directions as for Goosenecks State Park. Drive about 0.5 mile on SR 316 leading to Goosenecks, and notice a good dirt road on your right side, marked as County Road 244. Drive 2.2 miles on this road and take a left by the water tank. The road becomes sandy here, and you will get nice views of Monument Valley from here. You reach another split on the road marked with a cairn (about 1 foot high). Don't continue on the dirt road east, it ends after a 1-2 miles and you would have to return the same way. Anyway, if you have a low clearance, 2 WD vehicle, park your car at the 1 foot cairn. If you have a high clearance 4WD vehicle, continue on a rougher (some big steps) road for another 0.25 miles to the rim. There is a large cairn marking the start of the trail. The trail is well built and easy to follow. It does have some scrambling sections, and you may have to lift up your pet/kids at some places. It is very scenic, and provides great views. There are several nice beaches along the San Juan River, and the area is popular with overnight camping for rafters. 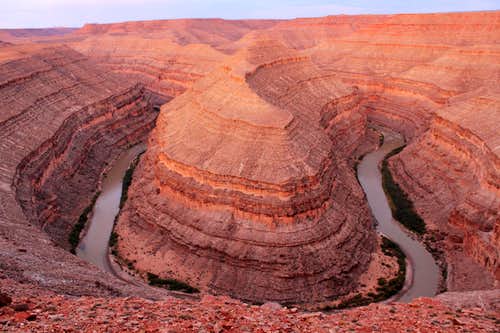 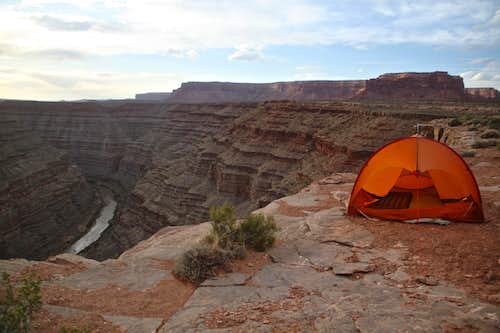 Goosenecks State Park is very primitive. Camping is allowed, but there are no developed campsites. The area can be intensely hot during the summer (no shade, no trees), and very windy since there is no protection.

It is popular with large RV, many are parked along the rim, and use the picnic tables. 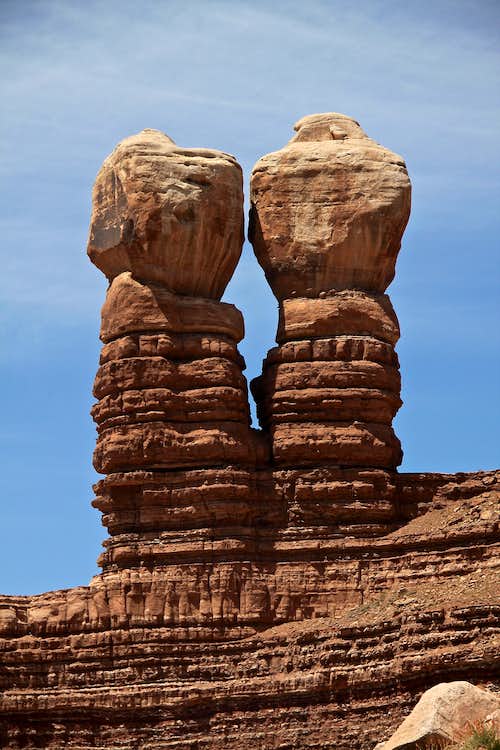 Navajo Twins - sandstone formation in nearby town of Bluff. 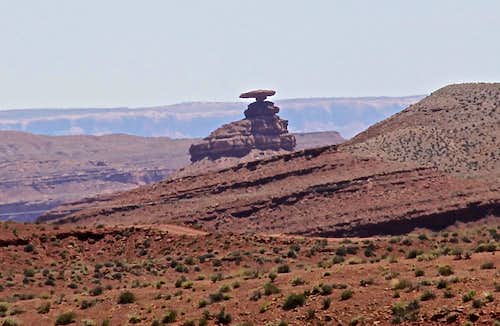