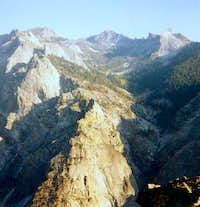 The Gorge of Despair offers some of the finest back country rock climbing in the Western United States. The various formations which flank the sides of this beautiful hanging canyon offer fantastic routes in every range of difficulty. The quality of the rock is superb and the setting is spectacular. Isolated by a lengthy and arduous approach, climbers in The Gorge of Despair can enjoy a truly serene wilderness experience. At night, looking out across the Middle Fork of the Kings River and the wilderness beyond, not a single light or other trace of civilization can be seen.

The Gorge of Despair is a feature of the Monarch Divide, the massive high crest of ridges, summits and canyons separating the South Fork and Middle Fork of the Kings River. Beginning at Yucca Point, where the two forks unite, the Monarch Divide rises steeply to the east, up Junction Ridge, to the summit of Mount Harrington at 11,009 Ft. (a gain of app. 8,700 ft in about 9 miles.) From the pass just east of Mount Harrington, the Gorge of Despair descends steeply down the north side of the Monarch Divide, finally making a precipitous 3,000 Ft. drop into the canyon of the Middle Fork, directly across from Tehipite Dome. A hiker who has reached the Gorge of Despair is rewarded with awesome views looking down from above at this great formation which many say is the largest dome in the Sierra.

The Gorge of Despair is approached from Kings Canyon National Park. Take highway 180 toward Cedar Grove. About 8 miles after passing Grant's Grove, in Sequoia, several turnouts along the road offer good views of The Monarch Divide. Mt Harrington, The Silver Spur, and many of the peaks in the Gorge are visible high atop the Monarch Divide.

The approach begins along the main highway about 1 mile west of Cedar grove. For the first leg, either of two trails will take you to Frypan Meadow. I have only used the Lewis Creek Trail for this part of the trip. As an alternate, the Deer Cove Trail starts further west and also will get you to Frypan Meadow by way of Wildman Meadow. By the Lewis Creek Trail, Frypan Meadow is about 4 miles, el. gain 3240 ft. From Frypan Meadow you must find the west branch of the trail, which goes up to Grizzly Lake, another 4 miles. The trail ends overlooking Grizzly Lake, with a fine view of the East Face of Mt Harrington. Find your way cross country towards Mt Harrington. You will have to ascend a steep barrier of Talus, and when you are in front of the mountain head north up the obvious break of Harrington Pass. This pass leads to the upper entrance of the Gorge. When you cross the pass you are in about 10 miles and have gained about 6,200 ft. As you descend toward the Gorge of Despair you will pass some high tarns, and then go around the west side of Despair Lake, below the west face of Tenderfoot Peak.

As you head down into the Gorge from the crest north of this lake, you will see that the formations are lined up along the sides of the canyon, with the majority being along the right side and the The Fang and the huge Silver Turret on the left. I can say from experience that crossing the canyon once down in it can be a very gnarly bushwack and that it is a good plan to pick one side or the other at this point. If you are heading for the Silver Turret, descend to the east of the creek for a little ways, but cross it and contour around pretty high up for the best line. There is a world class camping spot directly beneath the main face of the Silver Turret, and I have always found water there as well. If you are heading for the Cobra and it's neighbors, stick to the right side. There is beautiful camping up high along the south face of the Cobra, but the water is all the way down in the creek. I camped with Guy Keesee at the base of the prow of the Cobra once, and when we got up in the morning there was a huge pile of bear scat right in front of the tent door.

Although much of the approach is just outside the National Park boundary, The Gorge of Despair is inside the park, and so a wilderness permit is required to camp in the area. Permits are available from the Ranger Station in Cedar Grove, or from the King's Canyon pack outfit, if you are using their services (horse packers can only go as far as Grizzly Lakes.)

For permits in advance:

The summer months are ideal for climbing. I have made two trips in July, one in August, and one in late September. In September it was nice, but cold in the shade.

An excellent place to camp on the approach is found between Grizzly Lake and Harrington Pass, after you negotiate the barrier of talus. There is water here, an excellent tree for hanging food (perhaps a stash for the trip out?) and you are in a good position to cross the pass the next morning.

Once in the Gorge, there is a fine camping spot in front of the Silver Turret. I have always found water there as well. On the east side of the canyon there is a beautiful area up under the south face of the Cobra, but the reliable water is down in the creek (there are small water sources higher up on a wet year.)

The eastern side of the canyon presents a row of beautiful formations. From the top down they are Crystal, Cobra, El Commandante, El Corporale and Frustration Turrets. At the very bottom, perched over an airy 3,000 Ft. drop to the Middle Fork of the Kings River is Fascination Point.

Summit elevations for the major formations are:

Climbing was first recorded in The Gorge of Despair in 1951, when Dave Hammack and Anton Nelson visited the area and bagged the first routes on The Silver Turret, and the Crystal, Cobra, El Commandante and El Corporale Turrets. These early explorers must have had a grand adventure being the first to visit these airy and remote summits. The next year Dave Hammack returned with Jules Eichorn, Bob Smith and Clinton Kelley. On this trip they recorded the first ascent of Frustration Turret. In 1955 Fascination Point fell to Kim Malville, Fred Martin and Robert Tambling. Also in 1955, Dave Hammack and Anton Nelson returned to climb The Fang.

In 1972 Mike Cohen and Mort Hempel climbed the North Buttress of the Silver Turret at III, 5.8, A1, by far the longest and hardest route in the area at that time. Also in 1972, George Sessions, Mort Hempel and Steve Roper did a new route on El Commandante.

In 1973 Phil Warrender and Gary Valle made their first contributions to climbing in the Gorge with a new route on the west face of the Silver Turret, and another on the north face of the Cobra. Then in 1979 they returned and established the fabulous 5.9 route "Prow of Cobra", which follows a classic line up the entire length of this formation, from toe to summit.

In 1992 Kris Solem and Guy Keesee introduced the 5.11 grade to the area with the first ascent of "From Afar" on the south face of the Cobra. Over the next several years Kris and Guy made two more trips into the Gorge as they struggled to climb a proud and obvious line directly up the east face of the Silver Turret. On the second of these visits, with two 5.11+ pitches behind them, Guy suffered a knee injury and work was halted on the route until 1996. It was then that Kris, Guy and Chelsea Griffie returned determined to finish the climb. When Kris led a clean ascent with Chelsea as second, the Gorge of Despair had it's first 5.12, the 9 pitch "Despairadoes".

Midsummer weather patterns often include thunderstorms. Double ropes or two full ropes are a good idea in case you need to beat a speedy retreat due to weather.

The rappel route off the North Face of The Cobra requires 60m ropes or a long extention of 15 Ft. on the anchor to reach the hanging belay from where you make the second rap to the ground.

There are bears in the area. Other than leaving us a pile of crap for breakfast they never bothered us in camp or while we were there, but a stash of ropes and stuff we left behind when Guy got hurt was shredded when we returned.

I got sick on the water at the camp under the Silver Turret when I gave up on a slow water filter and drank what appeared to be perfect water unfiltered. Several weeks of moderate to annoying gastric distress followed.

I highly recommend bagging an ascent of Mt. Harrington on your way in or out. The classic north ridge route is some wild and airy "class 3", and leads to a fine summit.

I included Canyoneering on the list of area activites above, in reference to a possible descent of the entire gorge to Tehipite Valley. There is an unconfirmed report that this has been done. It would require many rappels and wetsuits might be wise.