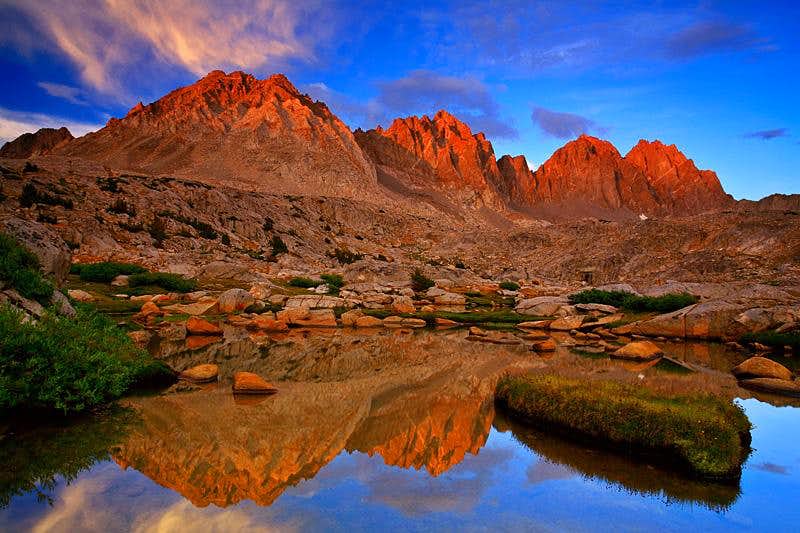 The Palisades is the most alpine subrange in the Sierra Nevada and contains some of the Sierra's highest peaks, its largest glacier, and most stunning scenery. It is a Mecca for trad climbers, ice climbers, backpackers, and a few scramblers who seek the area's dramatic scenery and alpine adventures.

The Palisades includes seven mountains topping 14,000 ft., which is nearly half of the 14ers in California, and several other peaks that are over 13,000 ft. The Palisades' high point is North Palisade at 14,242 ft. The Palisades spans from Taboose Pass south of Cardinal Mountain to Bishop Pass north of Mount Agassiz. It straddles the Sierra Crest and is bounded by the John Muir Wilderness in Inyo National Forest to the east and Kings Canyon National Park and the Middle Fork of the Kings Canyon to the west. Much of the west side of the range is only accessible by cross-country hiking. The most common type of rock is granite of varying quality, although metamorphic "Roof Pendants" seen at the top of Split Mountain are also present. 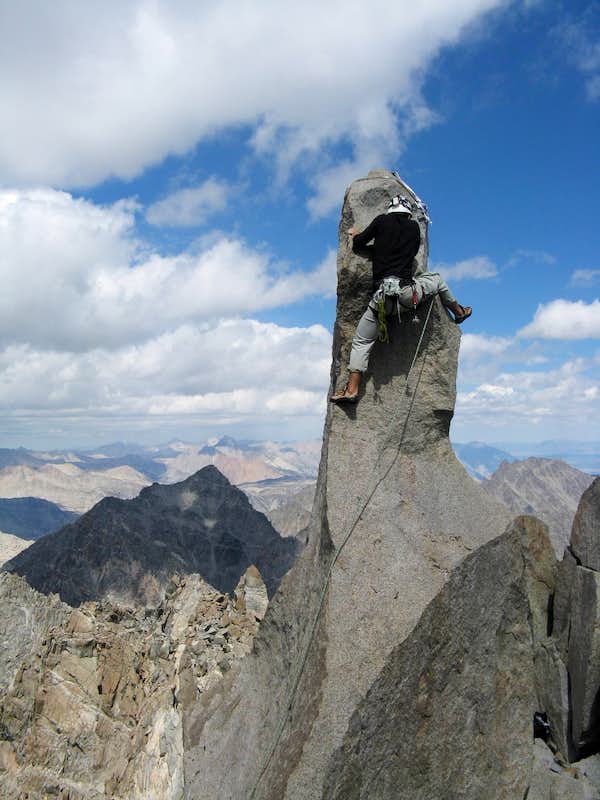 Most of the routes in the Palisades are at least somewhat difficult. The Palisades include several classic alpine rock, and snow, ice-climbing routes. It is also possible to do a traverse of most of the major Palisade peaks. However, because the Palisades peaks as a group are steep--much steeper than most other Sierra Peaks or subranges--there are only a handful of established class 2-3 routes. In fact, several summits--Polemonium Peak, North Palisade, "Starlight Peak", and Thunderbolt Peak can only be reached by at least fourth class climbing and Thunderbolt Peak's summit block is Class 5.8-5.9. 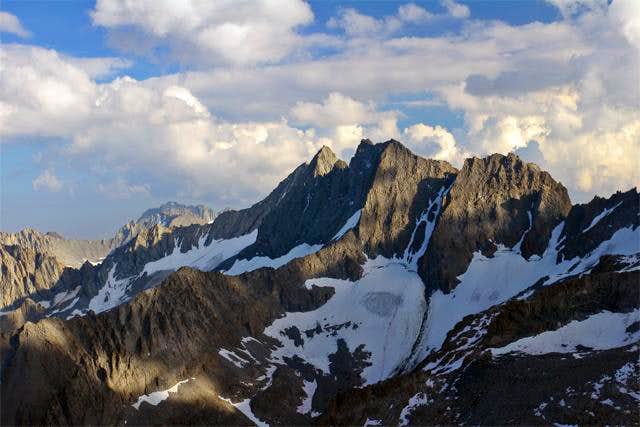 The Palisades also contain some fantastic backpacking opportunities. Much of the west side of the Palisades and basins immediately below are accessible only after climbing over class 2 and class 3 passes, although the Basins between the passes are gentle, rolling granite landscapes. Two trails, the Bishop Pass Trail and Taboose Pass Trail, cross the Sierra crest adjacent to the Palisades along with a few cross country routes, none of which are trivial. The John Muir Trail/Pacific Crest Trail parallels the Palisades to the west below. Steve Roper's "Sierra High Route" also passes through the area, offering a more adventurous and alpine alternative to the John Muir Trail below. A few trails approach the east side. The Big Pine Creek Trailhead provides access to some of the finest scenery in the Sierra, with views of the east side of the Palisades from Disappointment Peak to Mt. Agassiz, in addition to the Middle Palisade and Palisade Glaciers. The "Camping" section below describes some of the area's camping locations. See RJ Secor's The High Sierra: Peaks, Passes, and Trails for more information.

Etymology
Peter Browning in Place Names of the Sierra Nevada says this about the Palisades' etymology:

Bear canisters are required for overnight stays in Dusy Basin, Palisade Basin, and from the South Lake area, including Long Lake, Saddlerock Lake, and Bishop Lake. They may be rented at the Inyo National Forest ranger Station in Bishop. For information on bear canister requirements, check here.

Camping areas are listed from south to north.

Upper Basin
Upper Basin is defined by Split Mountain and Cardinal Mountain to the east. It is a high, alpine gently rolling tundra/moonscape. Upper Basin is bisected by the John Muir Trail, yet by wandering away from the trail, there are numerous campsites allowing solitude. The closest road access is via Taboose Pass trail.

Palisade Lakes
Set in a spectacular, deep canyon below Norman Clyde Peak and Middle Palisade, these relatively large lakes offer numerous camping options. Although it is located far from trailheads, its location along the John Muir Trail ensures that a steady stream of visitors pass through or camp nearby. The closest Palisade Mountains are Norman Clyde Peak and Middle Palisade, although getting to both requires climbing up several ramps that roughly follow a creek just below the outlet of the western-most Palisade Lake to the top of a large bench.

Below Middle Palisade
This area receives few visitors. Getting there from the north requires crossing four passes, including three cross country passes: Thunderbolt Pass or Knapsack Pass; Potluck Pass; then Chimney or Cirque Pass. Most hikers visiting the area probably do so while completing the High Sierra Route. However, this area offers superb scenery and solitude, making it worth a visit. The area provides access to Norman Clyde Peak and Middle Palisade, although some of the Middle Palisade routes from this side reputedly contain poor rock.

Glacier Creek
Glacier Creek is a convenient location for accessing the southwest slope of Mt. Sill and is also close to Mt. Jepson. The lakes there have several nice campsites. Getting there requires going over either Thunderbolt or Knapsack Pass and then climbing over Potluck Pass.

Palisade Basin Barrett Lakes in Palisade Basin is another fine camping area. Barrett Lakes, although farther from the trail than Dusy Basin, are still fairly popular camping locations. Getting there requires climbing over either Knapsack Pass or Thunderbolt Pass. The top of Thunderbolt Pass has a few nice camping spots with good access to Thunderbolt Peak, "Starlight Peak" and North Palisade and eliminates some downclimbing. The views from the Pass are unforgettable.

Dusy Basin
Dusy Basin is probably one of the most heavily visited alpine basins in the Sierra, and rightfully so. Besides the jaw-dropping scenery dominated by Mt. Agassiz, Mt. Winchell, Thunderbolt Peak, Isosceles Peak, and Columbine Peak, Dusy Basin also contains several sparkling lakes spread across a gentle alpine terrain. It is also the most accessible camping area on the west side of the Palisades, reached after an eight mile hike over Bishop Pass.

Red Lake
Red Lake is commonly used as a base camp for climbs of the east side of Split Mountain. For more information, check HERE. 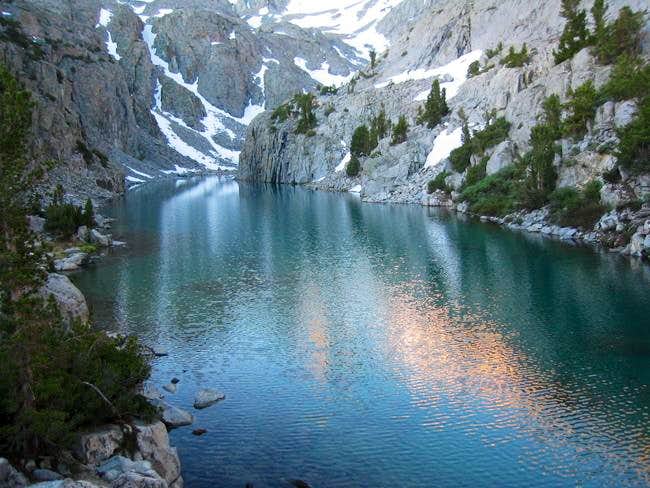 Finger Lake and Brainard Lake
Both of these lakes provide very nice although somewhat limited camping opportunities. Finger Lake, although farther from the trailhead, is closer to Norman Clyde Peak and Middle Palisade. The best camping sites are near the outlet. Both of these lakes are reached by hiking up the South Fork of Big Pine Creek.

Bishop Pass Trail
This trail is quite popular in the summer and advanced reservations are recommended to reserve overnight wilderness permits (see the "Red Tape" section of this page). The Bishop Pass trail provides access to the following areas, listed from North to South:

Most climbers interested in day trips prefer using east side access routes since they are much shorter.