SEKI is a gorgeous wilderness paradise right in the middle of California! 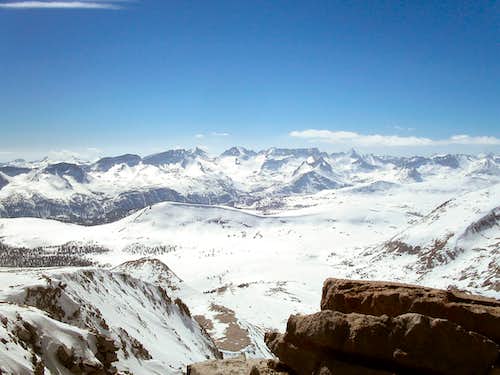 By the way, SEKI also has the biggest trees in the world.

Sequoia National Park and Kings Canyon National Park have been administered by the NPS as a single park since 1943. They are often referred to as SEKI.

Getting There (and where to go)

The parks can be entered by roads from the west, or by trails from the east, north, south, or northwest. The SEKI Park Map (click View Park Map) gives a great overview of the approaches.

Roads from the west

The Park Website Map page has a Map of the Roads in the park, which are all on the West side. No roads enter from the other 3 points of the compass. For more details on these approaches, see Steve Eckert's driving directions for western SEKI at http://www.climber.org/DrivingDirections/SequoiaKings.html .

1. Continue up highway 180 to Road's End for access to the high county and big wall climbing in south central King's Canyon Park. See Cedar Grove Logistical Center for detailed info on this area. Peaks such as Kennedy Mtn., Goat, Kid, The Sphinx, Mt. Francis Farquhar, North Guard, Brewer, and South Guard are most easily reached from here. Peaks like Deerhorn, Vidette, Ericsson, and Genevra are also good from this approach, but because Kings Canyon is so deep, and all the trailheads are below a mile in altitude, peaks farther away, like Jordan, Table, Thunder, Midway, Milestone, Whaleback, Triple Divide, and Glacier Ridge are toss-ups between the highway 180 approach and others such as Lodgepole, Onion Valley, or even Shepherd Pass. And peaks around Middle Fork Kings River, or basins like Center, Sixty Lakes, Gardiner, and Center, might be good candidates for easier approaches from the east or northwest instead.

From Freeway 99 near Visalia take highway 198 east, or from the Los Angeles area get off highway 99 on highway 65 just past Bakersfield and go to highway 198. Taking 198 east past Lake Kaweah you will have 3 ways to get into different parts of the park.

1. Just before the town of Three Rivers, you can go southwest along the South Fork of the Kaweah (on Southfork Drive) to South Fork Ranger Station/Campground for access to the southern tip of the park and a few lower peaks, such as Homer's Nose. See Schuman and Eckert's directions at http://www.climber.org/DrivingDirections/southfork.html

2. A little past downtown Three Rivers... go east and southeast on Mineral King Road, roughly paralleling the Middle Fork of the Kaweah River. In about an hour you will be hitting 8000 feet past Mineral King, for access to Vandever, Florence, Sawtooth, Needham, Eisen, Lippincott, Eagle Scout, the Kaweahs and some great high country. Mineral King is closed November 1 until late May. Open for Memorial Day weekend, weather permitting.

3. Continue up 198 into the heart of the giant tree area - Giant Forest and Lodgepole, for access to north-central Sequoia park high wilderness (see above).

Want topographical maps ?... then go to http://store.usgs.gov and click on "Map Locator & Downloader". The maps are Acrobat PDF document with "GeoPDF" features that allows you to get coordinates and more data from the map.

It's really cool to see the peaks in 3D on Google Earth ( or even 2D in Google maps ) - climber.org will show you all the major peak locations in Google earth at http://climber.org/data/SierraPeaks/AllRegions.html - SEKI peaks are in regions 2 through 15.

The basic Red Tape is all described at http://www.nps.gov/seki/planyourvisit/feesandreservations.htm and http://www.fs.fed.us/r5/inyo/recreation/wild/index.shtml . You are required to have a wilderness permit, "bear-proof" food storage, and to practice minimum impact camping. In many cases you will be required to pay a fee to enjoy the wilderness.

In 2010 SEKI initiated a wilderness management plan, and published draft plans in in 2012 and in 2014 at http://parkplanning.nps.gov/document.cfm?parkID=342&projectID=33225&documentID=59967. In April 2015 they released a "final" plan at http://parkplanning.nps.gov/document.cfm?parkID=342&projectID=33225&documentID=65018. This plan will seek to reduce impact on the wilderness by increased regulation of visitors, camping, climbing (appendix J). "It is a desired condition of this WSP/FEIS to reduce developments and installations in wilderness" - they seem to plan to reduce many things like the number of commercial installations, campsites, campfires, toilets, bear boxes, summit registers, fixed bolts, etc.

No fee is required to enter the Mineral King area, but to enter the main park by road requires a park entrance fee - $20 for a week, $30 for the year, or $80 for a 1-year pass for most federal recreation areas. Entrance fees are waived on 12 special days per year. You may qualify for other free or reduced fee passes - see the SEKI "Fees" page at http://www.nps.gov/seki/planyourvisit/feesandreservations.htm. There are additional fees for car camping, and for some wilderness permits and/or permit reservations - see below.

Wilderness permits are required for all overnight camping outside designated campgrounds - cost $15 (unless self-issued). Permits are not required for day hikes, except in the Mt Whitney area
(east side) where all hikers (even day hikers) need permits. All trailheads in SEKI have quotas so it's best to reserve a permit, except September 21 through May 21, when it's 1st come 1st served, only. When I went to Road's End on 9-28-06, the permits were "self issue" - no quota, no fee, no ranger. It might be a good idea to call the ranger to see if permits will be self issued where you are going in the off season. Entering from the east you need a permit from the Inyo National Forest,- see below. Entering from SEKI you need a permit from SEKI. SEKI charges a fee of $15 per group. I suppose that hiking in from other regions requires a similar approach to getting a permit.
To reserve a permit to start your trip within SEKI, they require you to FAX or mail a form (form is HERE) to their central permit office, no later than
three weeks before the start of your trip. You can call them to see if the date/trailhead/quota you want is available, and you can call afterwards to confirm that your fax/letter was received. Then they send you a "reservation confirmation", not the actual permit. To get the real permit, you have to show up at the permit station physically closest to your trailhead, only during their business hours, after 1 pm the day before, or before 9 am on the day your hike starts (or call ahead for a late pickup)!

Inyo NF is a little friendlier about permits, in that they will take reservations by phone or online, you can pick up the permit at any Inyo station, and you can pick up the permit up to 2 days in advance. Inyo has a practice of letting you pick up a permit at a designated "night drop box", so, for example, you could drive up on a Friday night, find your permit, and start hiking before dawn on Saturday morning, beat the heat and/or bag some distant peaks. But now, SEKI has made Inyo discontinue this practice for people who will actually be camping in SEKI jurisdiction. You will have to show up during business hours to get your SEKI camping permit from Inyo NF.

Go to http://www.fs.usda.gov/main/inyo/passes-permits and click on "Recreation Passes & Permits" for wilderness permit info.

Sequoia is the tree's genus name given by Austrian botanist Stephen Ladislaus Endlicher (1804-49).
Though it's not certain, the commonly held belief is that the word comes from the name of Sequoyah, (born approx. 1760 - died approx. 1843), a Cherokee silversmith He created the Cherokee alphabet around 1809, and is the only person to invent a writing system by himself. Apparently some people in the Park Service are a little more convinced that the trees are named after him, as there is an excellent specimen named Chief Sequoyah in the Giant Forest.
On September 25, 1890, Sequoia National park was established as the 1st National Park in California, and the second in the nation.

Captain Gabriel Moraga "discovered" and named Kings River on an expedition on on January 6, 1806, the day of Epiphany (Three Kings Day in the Christian religion), for which he christened it El Río de los Santos Reyes - The River of the Holy Kings. Moraga was a prolific namer and "discoverer" in that segment of history.

The South Fork of the Kings river has the most spectacular gorge, named Kings Canyon. This name beat out Gilbert Grosvenor's idea of The Sierra Wilderness Park, or the Sierra Club's early proposal of "John Muir National Park". Originally, there was the 4 square mile "General Grant National Park" at Grant's grove, established in 1890, a week after Sequoia NP. In 1940, Kings Canyon NP was established, absorbing the Grant park.

Try to keep all this history in mind when you see the simple mnemonic SEKI !

The National Park Service web site for SEKI is oriented towards people visiting those awesome trees, but you can find info very useful to climbers if you try hard enough -
SEKI Home Page
SEKI Wilderness Travel Info
Backcountry Trails of Sequoia & Kings Canyon A nice list and summary of all the trailheads for going into SEKI wilderness.
Trail Conditions - call the Wilderness Office for current info 1-559-565-3766.
Bear box locations (or see a much better guide at climber.org's Bear Box Page).
The NPS SEKI Rock Climbing Page is HERE

National Weather Service Forecast for Lodgepole is here
www.esavalanche.org - Eastern Sierra Avalanche Conditions - see Advisories, Incidents, and Observations.
www.avalanche-center.org for California weather and avalanche conditions.
30 Day weather outlook from the National Weather Service (if you're planning way in advance).
cdec.water.ca.gov - Snow accumulation data from all over California - it's a little hard to navigate. Try Snow Courses or Snow Sensors first to see what "Station ID" you need (such as CBT for Crabtree Meadow). SEKI stations are toward the bottom of the page, such as Kings, Kaweah, Kern... You can get more data by clicking on links there, or try Daily Snow Sensor Data or Snow Course Data to get data, or Snow Depth Plotter plot data for a long period of time.
The National Weather Service's San Joaquin Valley Road Reports and Live Web Cameras

http://groups.yahoo.com/group/sequoiakingscanyonhikers/ is a discussion group "about adventures in or near Sequoia and Kings Canyon National Parks".

No more such a thing as a National Park Pass

Now there is a $80 America the Beautiful Federal Lands Recreation Pass good for entrance to all National Parks, National Forests, BLM, US Fish & Wildlife, and Bureau of Reclamation sites for one year from date of purchase. If you're disabled, you may want to get an Access Pass which are free and good for a lifetime. If you're 62 years of age or older, a Senior Pass can be purchased for $10 and they're also good for a lifetime. Click here for more info on fees and passes. Existing National Park Passes and Golden Age/Access/and Eagle Passes will be honored until they expire.

Re: No more such a thing as a National Park Pass

Thanks - I updated the "Red Tape" section. Harry

If your mentioning only the Sequoia NP boundries and leading particular for the area, I should mention that Courtright is not within it's boundries but rather Sierra National Forest boundries.