This a beautiful calck mountain located in the Ortles-Cevedale group (Stelvio National Park) which presents 3 main routes: a superb ice-mixted nord wall (rem a famous climb on overhanging ice cornice by Kurt Diemberger), and a not-easy normal route, plus a mid-difficulty nordwest ridge. You need a good stability on crampons thinking about a climb on ice and snow with steepness up to 45-50 degrees on normal route.
According to the conditions of the mountain you may have 30 people on summit in a July day with a lot of snow on normal route and possibility to climb without crampons, but only few mountaineers in late season (after mid of August) when the route become completely on ice.
See on the second picture the climbing route. 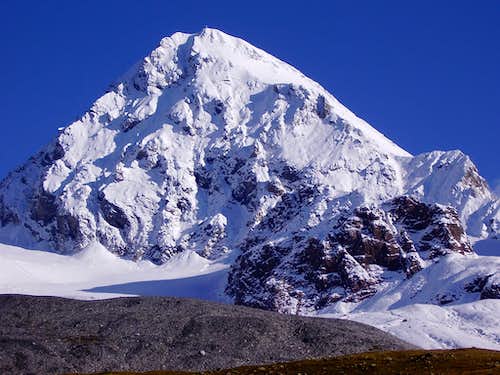 You have to act considering you're in a national park, no camping is allowed on route to hut or mountain.
Safety:
Mountaineering equipment necessary is that for glacier and mixt climbing, it must include the helmet.
Do not go to this mountain without an helmet, the recent climatic condition may cause some stone fall.

July is the best moment if your looking for an easy access, but sometimes the mountain is too dangerously crowded, and snow may have stability problems in hot days.
Wonderful in september, few climbers, but more difficult and at the same time interesting for the ice tecnique necessary.
In winter you have to check the quantity of snow on the sholder, risk of avalanche.
Going with skis:
the mountain can be mostly descended with skis in spring (March-May), you can reach the base with skis, climb carring them and enjoy a "steep descent". But consider having good snow conditions, strong legs and not too soft binding on skis, then do not make mistakes.

At the same group Ortles-Cevedale belong two other mountains included in SummitPost.com data base:
* Cevedale
* Palon de la Mare
You can see the records of those mountains also for more info about this mountain chain

In S. Caterina are carried out studies on ski athlets by ITBA group, the same which is carring scientific research on high altitude on human physiology in the Everest region.
They work in a scientific facility on the way to Everest, the Pyramid EV-K2-CNR / RONAST International Laboratory Observatory located in Lobuche, last camp before BC, which is an enteresting base for multidisciplinary scientific research on high altitude and remote areas.
Moreover the Pyramid is locally run by mountain guides with a large experience on himalayan mountaineering.

Many people think that the name "Koenig Spitze" means peak of the King.
The regal aspect of the mountains made this opinion believable. But the true is less aristocratic!

The mountain was, in XVIII century, rich of ironmines . In local dialect of italian side the mines were named "cunicl" , it means "little drift". On the german side the word "cunicl" was changed in Koening because the sound is the same.

The first ascent was done by Corbinian Steinberger solo on August 24th 1854. He started at 2 a.m. at Trafoi, passed Stilfser Joch at 5 a.m., crossed several glaciers and reached the summit via the south west flank. After 18 hours he was back at Stilfser Joch. This was such an phenomenal performance that it was long time doubted to be true.

A book on Gran Zebru

As starter of Gran Zebru post here: http://www.summitpost.org/normal/156080 i propose now a very good and specific book on this wonderful mountain, the book is in Italian by Davide Chiesa, here web site: http://www.comunicamontagna.it/nuovo_libro_gran_zebru.html and here automated english translation https://translate.google.com/translate?sl=it&tl=en&js=y&prev=_t&hl=en&ie=UTF-8&u=http%3A%2F%2Fwww.comunicamontagna.it%2Fnuovo_libro_gran_zebru.html&edit-text= If you like this contact Davide Chiesa here: chiesa.1@libero.it or me for more info here: gpverza@gmail.com The book came in occasion of 150 years of first climb of this wonderful mountain.