Graybeard Mountain is the beloved patriarch of the Seven Sisters, presiding grandly over the upper Swannanoa Valley. Entirely protected by conservation areas, it offers some of the prettiest, most accessible hiking in the North Carolina mountains.

Graybeard sits on the eastern continental divide and is the sixth-highest mountain in the Blue Ridge, the Appalachian front range that stretches from Pennsylvania to Georgia. Along that ridge it is topped only by the three peaks of Grandfather Mountain, nearby Blue Ridge Pinnacle, and Standing Indian Mountain far to the southwest. (In making this comparison, I'm referring only to the Blue Ridge itself, not to the Blue Ridge geological province, which encompasses higher ranges to the west of the front such as the Black Mountains).

Once a bald, Graybeard is now a little overgrown on top but still has a great view northward toward Mt. Mitchell (the dark hogback on the horizon at the center of the photo below: 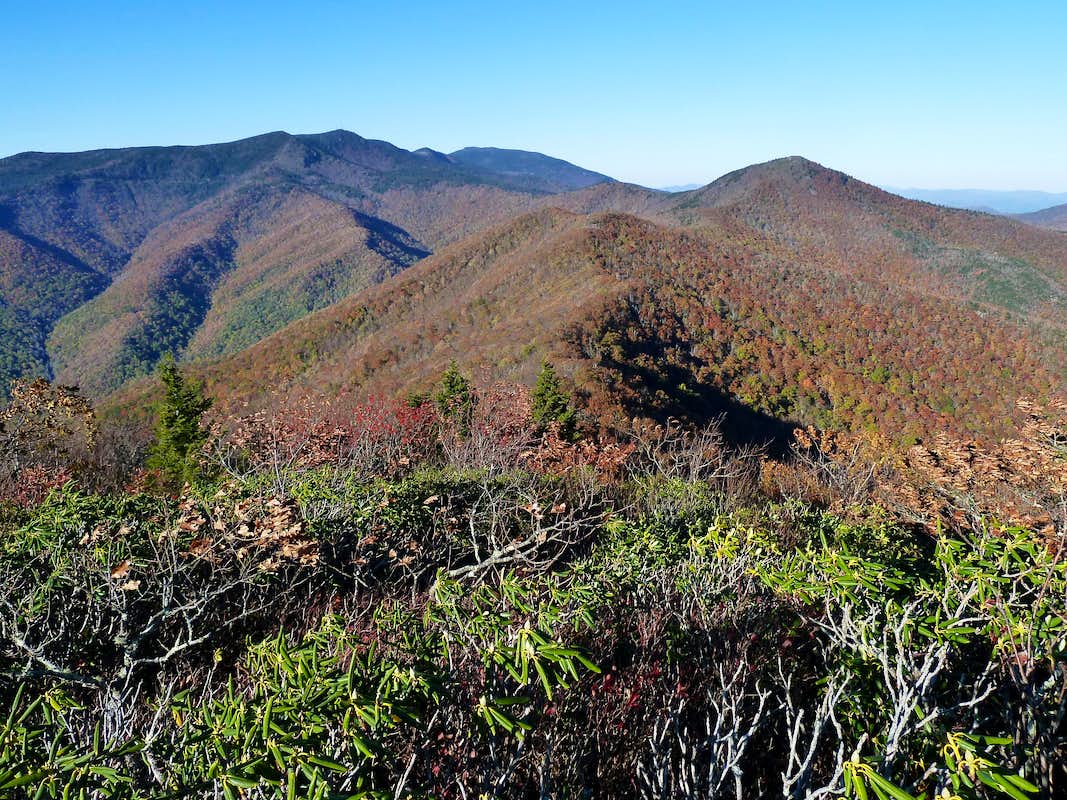 Most Graybeard climbs originate in Montreat, a Presbyterian retreat center, resort community, and college town. Exit Interstate 40 at Black Mountain and take NC Route 9 about two miles to the Montreat Gate. Although Montreat is privately owned by a nonprofit association, it is open to the public, so proceed on through. Route 9 becomes Assembly Drive and then turns into a road called "Graybeard Trail." In other words, you won't need to do any navigating at all--you just drive straight ahead. The main Graybeard trailhead is extremely well marked at the end of this road.

The alternative Big Piney Ridge trailhead uses the same approach but requires a left turn on Suwannee Road about seven tenths of a mile beyond the little lake at the center of Montreat (Lake Susan). 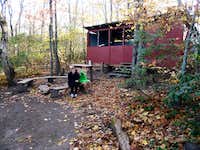 There is a lot of misinformation abroad about the length of this trail. Montreat's trail handouts say it is 3.25 miles, a figure that probably was never accurate to begin with but certainly hasn't been correct since the trail was significantly re-routed a few years ago. The distance from trailhead to top is just short of six miles. The vertical rise is 2400 feet.

The trail climbs steadily along pretty Flat Creek for about 800 vertical feet before joining the switchbacks of the "Old Trestle Road," an early 20th century railroad bed. The next two miles and 700 vertical feet follow this gentle grade (great for trail running!). The final section of the hike is on steeper conventional trail, passing first the Walkers Knob Trail Shelter and then a junction with the West Ridge Trail before emerging on the summit.

There are two "must" side-trips. The first is a marked hundred-yard excursion to Graybeard Falls from the Trestle Road--the falls are a pretty cascade that photographers will enjoy. The second is quarter-mile spur through gorgeous forest to Walker's Knob, starting from the trail shelter of the same name. The top of Walker's Knob is a dramatic crag, an even better perch than Graybeard's summit.

West Ridge Trail: Another excellent route to the summit is to climb the Big Piney Ridge Trail from Suwannee Drive to the top of Brushy Knob, and then to walk the Seven Sisters crest along the gray-blazed West Ridge Trail to the top of Graybeard. The distance covered is about four miles--significantly shorter than the re-routed Graybeard Trail--and the total vertical ascent, factoring in the ups and downs along the crest, is 2750 feet. The trail is rougher and steeper than the Graybeard Trail in places, but overall it is probably the fastest way to the top, and the ridgecrest walking is often quite scenic and exhilarating. Since the two trailheads are only half a mile apart, you can easily make a circuit hike using both routes.

Swannanoa Rim Trail: Graybeard can be climbed from the north by means of a little-used path along the crest of the Blue Ridge from Rocky Knob to Graybeard. The path is overgrown and sometimes hard to follow, and should be attempted only by experience backwoods travelers. 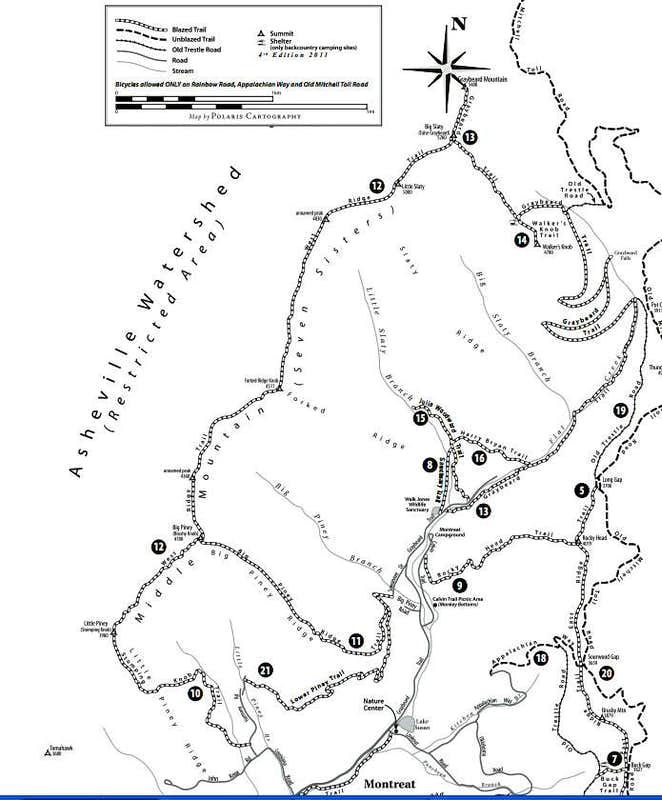 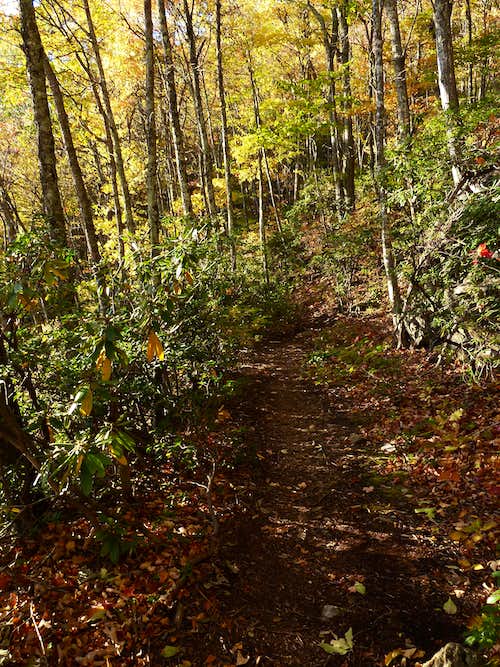 On the railroad "switchbacks" of the Graybeard Trail

The Graybeard Trail is the perfect place to witness firsthand the origin of the word "switchback." The middle section of the trail follows the route of the 1913-1921 Mt. Mitchell Railroad, operated Pennsylvania lumbermen Fred Perley and W.H. Crockett to transport tourists and to denude the Black Mountains of their valuable fir trees.

Professor Perrin Wright has written a good description of how this narrow gauge railroad gained the elevation to reach Mt. Mitchell:

"A switchback is a section of track in the shape of the letter Y turned on its side. The train, moving sidehill, enters the switchback on one arm of the Y, then moves to the base of the Y, which for lack of a better word we will call the spur. While the train rests on the spur, the track is switched, and the train then moves out of the the switchback along the other arm of the Y. Switchbacks are used to reverse direction sharply because trains cannot negotiate hairpin turns ....

"If a train is moving forward as it enters a switchback, then it will be moving backwards as it leaves. This makes it necessary to back the train all the way to the next switchback, where the direction will be reversed and the train can move forward once again."

You'll see three of these railroad switchbacks on the way up Graybeard, and if you look closely you'll see traces of the "spur" siding where the train would rest while the conductor threw the switch on the main line. This railroading practice is now a thing of the past, and the term "switchback" has been transferred to hiking trails, with little memory of its railroading origin.

The watershed of the North Fork (Burnett) Reservoir, representing the whole western flank of Graybeard, is Asheville Watershed land off limits to hiking of any kind. Hiking the crest, along the boundary of this restricted region, is permissible.

The southern flank of Graybeard is privately owned by the Mountain Retreat Association, which operates the Montreat Conference Center. Hikers are welcome, but backcountry camping is not permitted except by arrangement at the Walkers Knob Shelter. Car camping at the base of Graybeard may be possible by prior reservation. You also can't mountain bike on any of Montreat's trails on Graybeard (although there are other places in Montreat you can do so).

The east flank of Graybeard belongs to Pisgah National Forest, administered by the Grandfather Ranger District. You could camp over here, but there aren't many good spots. 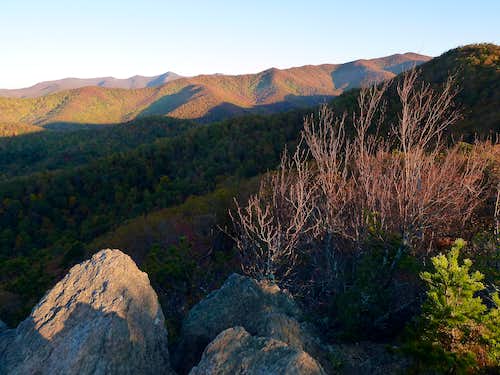 Graybeard (upper right, most distant)and its long train of sisters, October. The background mountains in the upper left are the Craggies. Photo from Rattlesnake Mountain.