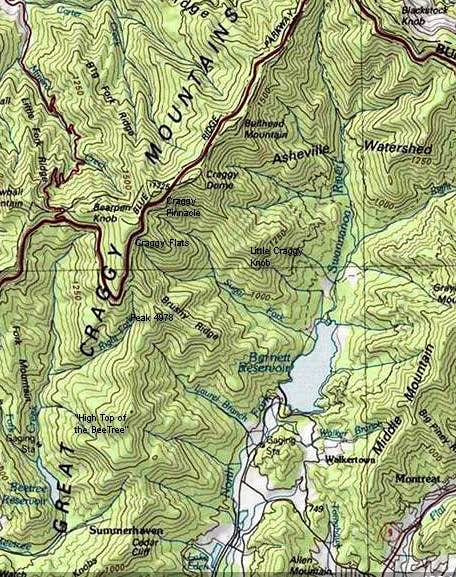 The Great Craggy Mountains, usually referred to as “The Craggies,” are one of North Carolina’s half dozen 6000-foot-plus ranges, stretching a dozen miles across eastern Buncombe County. Their base-to-summit rise of over 3500 feet, coupled with the largely treeless profile along the highest part of the crest, makes them more impressive from below than most southern Appalachians. At the top, they are sheer joy, with incredible floral displays on the highest summits and a rugged, rarely visited ridge linking the middle-sized peaks. Much of the range is within the access-restricted Asheville Watershed and has therefore remained extremely wild. Bears are especially abundant in this range.

The higher section of the range is traversed by the Mountains-to-Sea Trail.
The Craggies section of the trail, with an excellent zoomable map, is described here.

The Craggies form about half of the Swannanoa Rim, "Eastern America's highest and most historic skyline." This long, high elevation perimeter around the Upper Swannanoa Valley has recently attracted the notice of hikers and extreme trail runners who try to complete its entire length.

A misinformed article in Wikipedia and a bizarre map on Peakbagger notwithstanding, the Great Craggies designation historically has referred only to the single chain running along the Swannanoa Rim; the ridges off to the west like Lane Pinnacle and Beaucatcher Mountain have not--as far as I can tell from reputable sources--been considered part of this range.

This page provides an overview of the peaks of the Great Craggies, with links to individual mountain pages or pictures, where available. 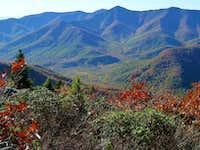 The northern Craggies are traversed by the Blue Ridge Parkway, which weaves a few hundred feet below the highest summits. The lower southern portion of the range is accessed from the Beetree and North Fork Valleys, respectively northwest and northeast of Swannanoa, N.C. on Interstate 40.

The highest section of the range as viewed from Black Mountain, N.C. Click, then click again, to enlarge
Views from the Craggies are generally dominated by the Seven Sisters range, whose individual summits are identified at this link.

The Summits (North to South)

Walker Knob (5482’): This peak rises 160 feet above Balsam Gap, where the Craggies connect to the Black Mountains. It can be climbed on the Mountains-to-Sea Trail from the Blue Ridge Parkway overlook at the gap. The quarter-mile walk is pleasant but the summit is viewless.

Locust Knob (5480’+): A minor but named bump as the ridge ascends to Bullhead, with about 40 feet of prominence. The Mountains-to-Sea Trail almost crosses its summit. It has an outcrop with a fine view.

Bullhead Mountain (5930’): This is one of the four main Craggies that make such an impressive skyline from Blue Ridge Assembly and other viewpoints around Black Mountain, N.C. The laurel-covered summit, which has some views, is climbed by using the Mountains-to-Sea Trail from Greybeard Mountain Overlook on the Blue Ridge Parkway, followed by a short bushwhack. 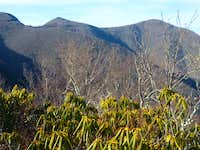 Craggy Pinnacle & Craggy Dome from Brushy Ridge
In earlier centuries this mountain was known as Bull's Head (Arnold Henri Guyot, 1860), and possibly as "Wahoobie" (which is probably wa-hu-bi from Cherokee).

Craggy Dome (6105’): The queen of the Craggies, a strikingly smooth peak covered entirely with what the old mountaineers used to call a “laurel hell”—an almost impenetrable growth of mountain laurel and rhododendron. Many elevations have been given for this peak. This one is taken from Miriam-Webster’s Geographical Dictionary (3rd ed. 2001). Of peaks with 1000 feet of clean prominence, this is the tenth highest in eastern America. It has a trail, described here. Craggy Dome has also been called Big Craggy and Old Craggy, names that can be found in early published sources and that I recall hearing as a child in the 1960s.

Craggy Pinnacle (5892’): This peak has a rocky summit and a fine view. It is almost always climbed by the very gentle developed trail from the Craggy Dome Overlook on the Blue Ridge Parkway. In earlier times (up to the mid 20th century) it was also called Buckner's Knob, after the Buckner family, one of the early families to settle on the Barnardsville side.

Craggy Flats/Craggy Gardens (5680’+): Craggy Flats, also called Craggy Gardens on some maps, is a fairly level summit a little more than half a mile long. The southern end is sometimes called Craggy Knob. It supports the gorgeous Craggy Gardens trail system, which can be explored via the main link above. A pdf map is here. You can connect to Douglas Falls on the north side of the range.

Little Craggy Knob (4880’+): This is a prominent outlier on the south flank of the range. It is entirely within the Asheville Watershed, and climbing it is highly illegal. Not to be confused with Craggy Knob, a minor point on the Craggy Gardens ridge. 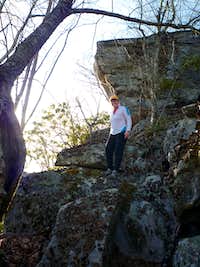 On the rugged upper portion of Brushy Ridge
Peak 4978 (4978’): This unnamed peak is the summit of Brushy Ridge, the very prominent lateral ridge of the Craggies that rises from North Fork Reservoir. Peak 4978 has good views, but they are located about a hundred yards east of the wooded summit, at a point where Brushy Ridge becomes almost a knife edge for a short stretch. There is a trail to the top of Peak 4978 from the gap at the head of Laurel Branch. Reaching that point may require a traverse of Peak 4920, or else permission to enter the gated Laurel Ridge community coupled with special permission from Southern Appalachian Highlands Conservancy, which owns the headwaters of Laurel Branch.

National Geographic "Trails Illustrated" Map 779 shows three "improved roads" converging on the summit of Peak 4978. This is some of the most misleading information I have ever seen on a map. The only hint of a road you will find near this remote summit is a long-disused logging trace that still exists on portions of the Peak 4920-Peak 4978 ridge. 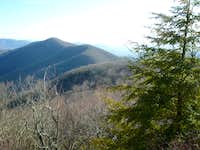 Peak 4920 from Peak 4978
An old mountaineer once told me that the whole mass was collectively known as “The High Top of the Bee Tree,” but I have no confirmation. The south subsidiary summit has a cleared helicopter landing pad for Asheville Watershed patrols, and the Watershed has a sign up that calls that summit "Richland Knob." The north subsidiary summit is more of an independent peak (with about 100 feet of prominence), but is well hidden from most valley viewpoints and gets no attention at all.

The High Top of the Bee Tree was once an appealing mountain that dominated the lower North Fork Valley. Nowadays, people tend to avert their eyes because of the enormous strip mine/quarry on its eastern flank. However, the crest of the central summit is very pretty in summer, with impressive rock outcrops and partial views just south of the top. The topo lines notwithstanding, this mountain seems to be higher than Peak 4978, and there's some chance that when an accurate measurement is taken it will turn out to be a 5000-footer.

The best access to this peak was once from Summerhaven in the Beetree Valley, but that--and all other access from that side--is now blocked by the proliferation of gated communities and no-trespassing signs that are becoming the scourge of these mountains. Your best bet these days is probably to get on the crest of the range at Cedar Cliff by means of the trail on the east ridge of that mountain, and walk north from there. This ascent is trail-less from just north of the Garden of Eden until the south summit. If you stay right on the ridge until you reach the south summit, you should be legal; don't stray onto the east flank, which is posted land of Hedrick Industries.

Garden of Eden (3960’+): This fine mountain can be climbed on a reasonable trail (sometimes used as a 4-wheeler track) along the ridge from Cedar Cliff. It has a fabulous open rocky crest on the south side, about 100 vertical feet below the top, which is probably the crown jewel of the lower Craggies. Black Mountain College, once an internationally famous experimental college with Albert Einstein on its board, was located at the foot of this mountain; the old campus is now used by Camp Rockmont for Boys. The name "Garden of Eden," which does not appear on official maps, was used by people attending the college. 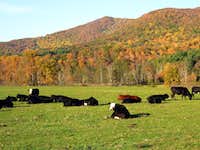 Cedar Cliff (L) & Garden of Eden from the east

Cedar Cliff (3825’): This mountain has an excellent jeep road/trail on its east ridge, beginning about 300 feet above the valley and continuing to the top. With appropriate permission, the trail can be accessed from Camp Rockmont or over disused logging roads just south of the camp. About 200 vertical feet below the top is an outcrop with a fine view to the south. At the viewless summit, the east ridge trail intersects with a good north-south trail along the crest of the range.

Four Brothers Knobs (3600’+): A six-pointed ridge that rises about 1300 feet above Swannanoa, N.C. They are the bumpy ridge on the right in this photo. The main summits, all wooded, are reached by ATV trails from Cedar Cliff and from the gap between the Brothers and Watch Knob.

Watch Knob (3240’+): One of four Craggies with 300 feet of prominence (the others being Craggy Dome, Bullhead, and the High Top of the Bee Tree), this steep cone at the southwestern terminus of the range looms large above Warren Wilson College. A gated logging road reaches its summit, which, but for the trees, would have one of the finest northward views in the range. Photos here. 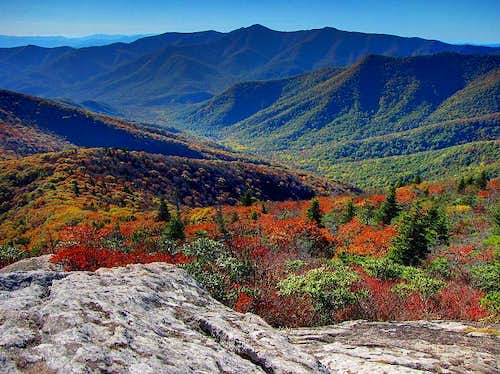 View toward the Craggies from Blue Ridge Pinnacle. Photo: Jim Fulton
The watershed of the North Fork (Burnett) Reservoir, representing the whole eastern flank of the Craggies as far south as Brushy Ridge, is Asheville Watershed land off limits to hiking of any kind. Hiking the crest, along the boundary of this restricted region, is generally ok. The upside of the watershed restriction is that the area has retained (or regained) its wilderness character.

Also posted as off-limits is the watershed of Asheville's Bee Tree Reservoir, which abuts the crest of the middle Craggies in the area of the High Top of the Bee Tree and Peak 4978. In this area the west flank of the range is a no-trespassing area, but you should be ok on the crest or east flank. The keep-out signs are sometimes posted improperly to suggest the entire ridge is blocked in areas where it is not.
Another restricted-access wilderness was created in 2011 with the purchase of 492 acres in the upper Laurel Branch drainage by the Southern Appalachian Highlands Conservancy (SAHC).  SAHC has placed the land is under a conservation easement and is managing it for perpetual wilderness.  This tract, which runs along the east flank of the range from the High Top of the Bee Tree to Peak 4978, is at least nominally closed to public access and is not likely to be opened soon.  You can join the SAHC for $35, and there is an "adopt-a-property" program under which you can get permission to hike through the reserve and report back to the organization. 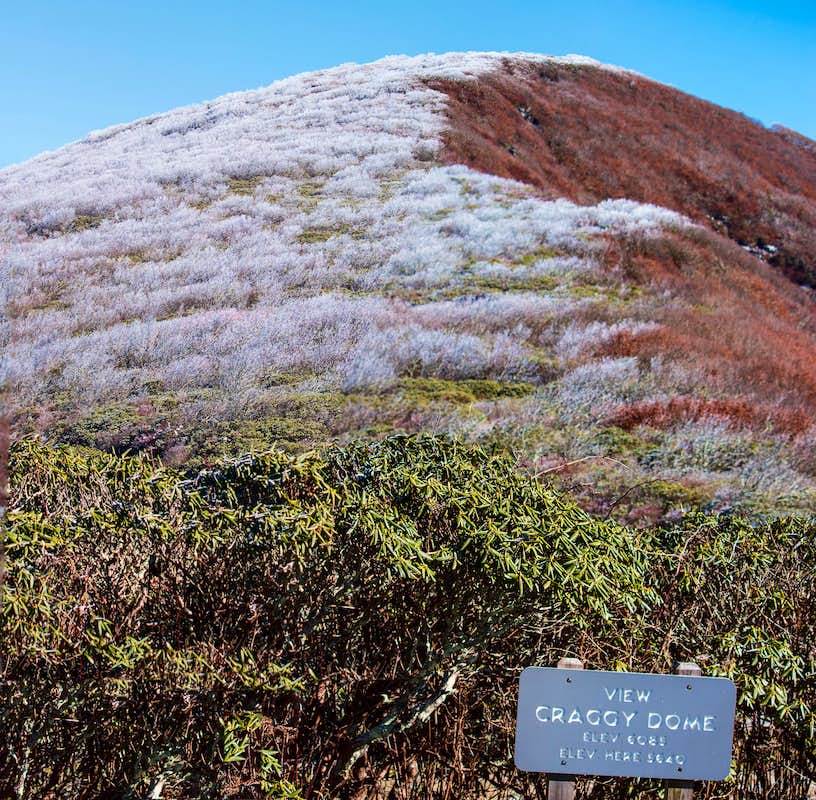 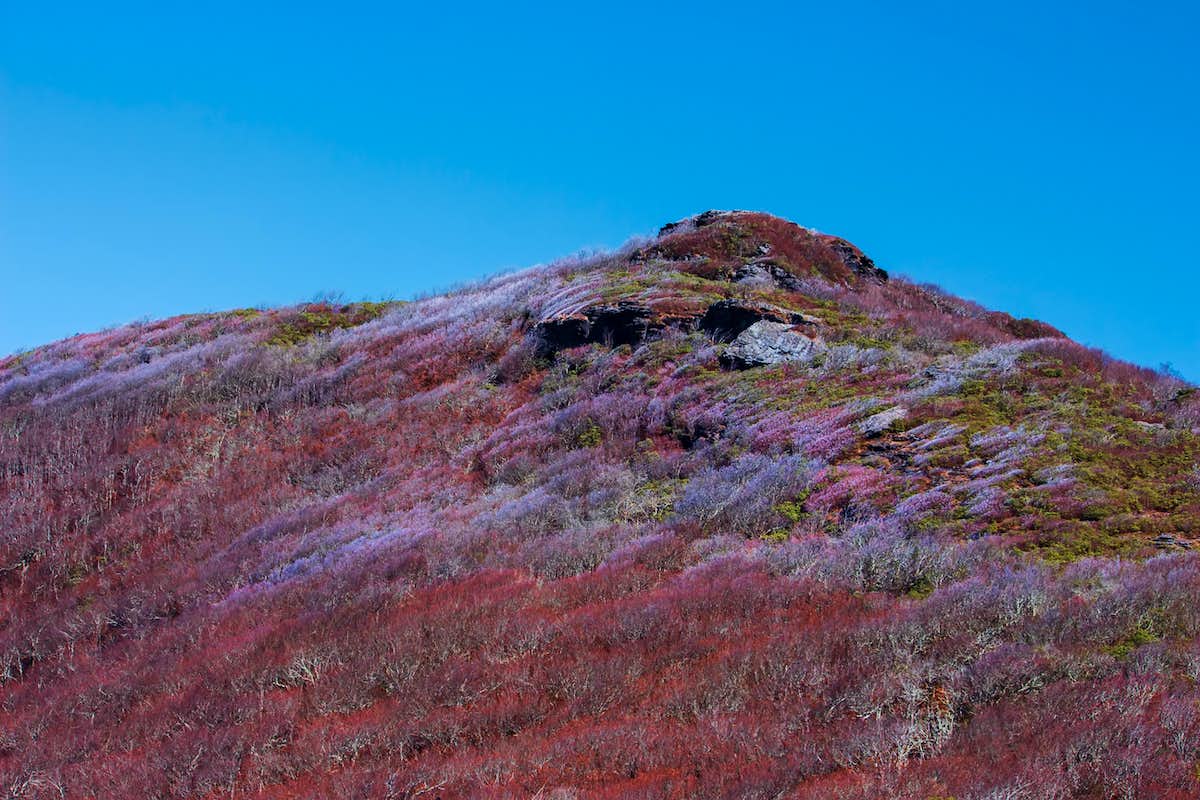