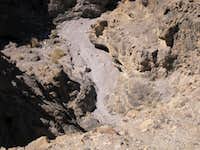 Unlike Mosaic Canyon, though, Grotto Canyon seems relatively unknown. The current NPS map that people can get at the visitor center and other staffed locations in the park shows neither the canyon nor the road to it.

In all honesty, Mosaic is the prettier Canyon, but Grotto is nice enough and offers solitude.

Disclaimer: I only went as far as the route described on the Trails Illustrated map for Death Valley National Park. What lies beyond the end of that route, be it a dead-end after 15 yards or a serpentine technical route deep into the mountains, is unknown to me. I wanted to go on, but I was a little weak from a three-day stomach bug, and my wife had already headed back to the car. Anyone who has gone well beyond my route and wants to take over this page is welcome to it; this page is here for sharing information, not for votes or points.

The road leading to Grotto Canyon is not signed. It is, according to the odometer in my brother's old Toyota 4Runner, 2.2 miles east of the gas station and store at Stovepipe Wells. Turn south onto this road.

It is 1.8 mi to road's end. At first, the road is moderately steep and rocky but does not really require high clearance or four-wheel drive. However, the last 0.6 mi do require 4wd because the "road" is a wash consisting of loose gravel. In the 4Runner we were driving, 4-High was sufficient. A barrier blocks the road at its end.

The Trails Illustrated map says the route is one mile (one way) and describes it thus: "Look for rock cairn marking route to the east around the dry falls at beginning."

Okay, there are dry falls close to the beginning, and they are after a prominent junction of washes (stay left, as the other wash soon climbs steeply to cliffs, which I observed from a narrow ridge between the washes).

However, I saw no cairn marking the route to the east around these falls. Nevertheless, the way around them is obvious, and it is shown in a picture below.

If you're up for some extra challenge, though, climb those dry falls. There are actually three of them. The third is the smallest and easiest by far, and the second is the hardest. All three are shown following the notes below.

First dry fall-- something like 12-15' (sandy landing should you slip and fall) up very smooth rock, but there are some holds and stemming will probably be necessary; Class 4-5.2.

Third dry fall-- hardly worth mentioning. It's smooth but only a few feet high. Your feet might slip on the smooth rock. That's all.

Past these falls, the canyon opens up again, but then it narrows as you go across some smooth rock like that found in Mosaic Canyon. Shortly past there, the canyon opens and then narrows again to enter a slot leading to a dry fall steeper, smoother, and a little taller than the ones encountered earlier. This is about one mile from road's end and presumably the end of the route noted on the map, but shortly before the slot, there was a cairn marking an obvious way around the slot on the east side. I felt that I could have climbed that dry fall, though perhaps in rock shoes instead of hiking boots, but I turned back for reasons already noted.

A look at the USGS Grotto Canyon quad suggests that the canyon continues for at least a mile beyond where I stopped. Whatever is after that stopping point is for you to discover. Enjoy.

Don’t go in summer unless you go at dawn or at night. Daytime temperatures in summer frequently exceed 120 F.

Carry at least twice as much water as you think you’ll need. Don't let the short distance from the road fool you; deaths have resulted from "quick hikes" by the unprepared at the nearby sand dunes.

There is a fee campground at Stovepipe Wells and another one at Furnace Creek, 28 miles east of Stovepipe Wells. Running water, showers, and flush toilets are available at each.

Camping in DVNP during the summer can be miserable. There are air-conditioned lodge rooms at Furnace Creek and Stovepipe Wells. Do yourself a favor and stay at one of those places. Visit Xanterra or escapetodeathvalley.com for more information.