By David Socky
On Father’s Day, June 15, 2014, Nick Socky and I climbed the Hawaiian high point, Mauna Kea, which is 13,796 feet high. This was my 29th state high point, and Nick’s fourth.  We drove from sea level up to the Ellison Onizuka Visitor Center, at 9200 feet, and started our hike at around 8am, after filling out the requested check-in form (no permits or fees are required). The day was sunny and comfortable. Nick had shorts and a t-shirt, while I had long pants and long sleeved shirt in order to protect myself from the sun.  Although it was windy and cool, heavy clothes were not necessary.  We did carry extra clothes in case of inclement weather, but they were not required, as it was pretty nice all day.  Water is the other important item to bring as the high altitude air is very dry.  I brought 3 liters, but only drank half of it. 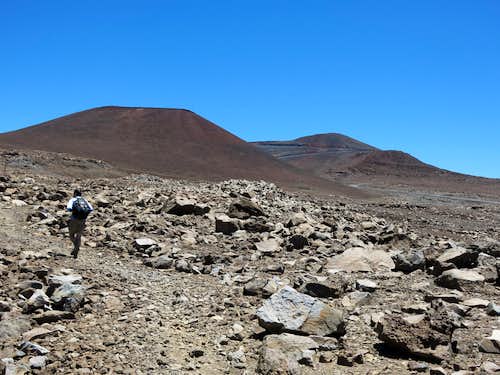 Nick on the way up Mauan Kea
The temperature started out somewhere in the mid-50s, but got cooler as we gained elevation.  With the wind chill, the lowest temperature was probably around freezing.  However, the exertion of climbing kept us warm and so we never had to use any of our extra clothes.  In spite of the use of sun screen lotion, Nick did get a pretty good case of sun burn.

The trail we took is known as the Humuula Trail, and measured out to 6.7 miles by my GPS.  Our track included the short side trip to Lake Waiau, which is at 13,100 feet in elevation. The hike up is not hard and the trail is very well marked, but the fact that we did not acclimatize at all and had been more or less living at sea level, meant that we really huffed and puffed on our way up.  The steeper sections were especially slow.  Even hiking on the steep road near the top kept me out of breath with a racing heart.  But in spite of this, we made it to the top in about six and half hours, which included several breaks for food and water. The hike down (no, we didn’t hitch a ride) was appreciably faster, 2 hours and 45 minutes! And this included a 10 minute stop at Lake Waiau. 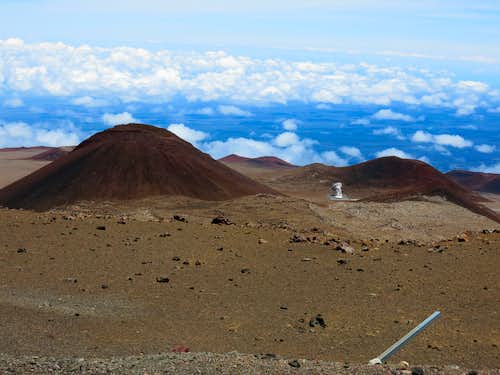 Looking south about 2/3 of the way up

In between the heavy breathing and the racing heart, both Nick and I enjoyed the desolate landscape. We both commented that if it wasn’t for the colors, you would think we were on Mars.  The early morning light produced long and sharp shadows of the obviously volcanic rocks which were spread across the sandy slopes of the mountain. At the higher elevations, above 12,500 feet, the landscape was totally desolate, without any plants or even lichen. It was all quite beautiful, in a stark kind of way, but also discouraging, especially when you could easily see the trail miles ahead, rising ever higher up and around tall dark colored cinder cones.  What?  We still have that far to go? 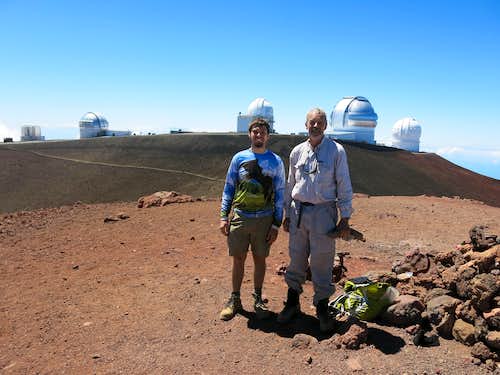 (L to R): Nick and Dave Socky on top of Mauna Kea

But once past Lake Waiau, we came over a rise and around a corner, and there in the distance was our first sighting of telescope observatories.  Within minutes, we were on the road, and after two long steep sections we finally attained the top.  After some lunch and obligatory photos for an hour, we headed back down.  As mentioned earlier, our trip down took just under 3 hours. We arrived back at the visitor center at 5:20pm – nine hours and twenty minutes after we had started.  I was somewhat surprised to see that our moving average speed was 1.8 MPH. Like I said, we made good time coming back down! All in all, it was a good hike, and a great Father’s Day!