Bay House B&B is a gorgeous place right on the bay in Hilo.  Our host Tina described the wonderful breakfast spread she provides in the morning.  But I had not booked this place to enjoy the breakfast.  My alarm went off at 3.10am and I had my usual cup of tea and large bowl of cereal.  I had my daypack already packed: 4 litres water, 8 cinnamon buns, thermals, rainjacket, first aid kit.  Headtorch on.  I took a photo from our ‘lanai’ out across the bay.  In the harbour lights it was warm and damp, with the clouds practically touching the bay.  I slipped out the front door at 3.40am, locking it behind me – no return now, not without waking the house up! 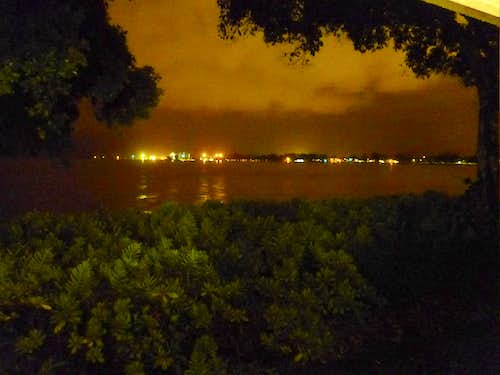 I followed the coast road a short way and turned right up Waianuenue Ave.  The climb started almost immediately.  I did not know it then, but there are literally no downward steps between here and the summit.  Not even level bits.  It is relentlessly uphill, with mean gradient 6.5%.  After about 1 mile, I took the left branch, up Kaumana Drive.  The road winds its way up through the suburbs.  An occasional car came past, tyres sloshing the wet road surface.  The mist had turned to light drizzle.  It was warm, it did not matter.  Living in Sydney, I am used to humidity.

After about 5 miles, on the edge of town, Kaumana Drive joins Saddle Road, the suburbs giving way to semi-rural properties.  Saddle Road is wide with a good surfaced verge.  It did not really rain much, mostly it was mist and a little drizzle.  As the road climbed the mist grew cooler and cooler.  I was working just sufficiently hard to stay comfortable.  As the mist turned grey with approaching dawn, the traffic increased a bit, mainly heading up the hill, presumably commuters heading to work on the west coast.  I stopped for a drink and bite to eat after about 15 miles.

I’m not a road runner.  I was jogging slowly and not enjoying it very much.  I just wanted to get this bit over and hoped it would get better further up.  I do many endurance events, often through the night.  I know that if I’m not enjoying it, it is just a phase you need to get through.  As if to emphasize the tedium of the run, there are mileposts all the way up this road.  16... ... ... 17... ... ... 18... it seemed like forever to go each mile.  The landscape of partly-forested lava flows seemed to barely change.  Among the commuter traffic there was the occasional old car or ute, full of people and with the Hawaiian flag flapping out of an open window.  Football match, I wondered?

I approached the junction, the turn-off for Mauna Kea Access Road, the 28th milepost; the drizzle had stopped and the mist seemed brighter.  Another short feed and I continued up the side road.  Narrower but very little traffic.  Through ranching country.  The cloud grew brighter with glimpses of blue.  Some steeper sections took me through mist and into sunshine.  Soon I was above the cloud level and another world opened up around me.  Momentarily I felt light-headed and realised I needed to breathe a little extra up here.

There was quite a crowd around the visitor centre, both sides of the road, and it seemed like a carnival in progress.  Turned out to be a protest, native Hawaiians opposed to plans for another telescope on their sacred mountain.  That explained those cars with flags!  I got myself a hot chocolate and refilled my water bottles.  Ate more cinnamon bun.  It was 12.30pm and I sent my wife a message saying I was on schedule, that is, to meet her on the summit at 4pm, as arranged.  One of the protesters came over and said he’d passed me on the road.  He was a bit stunned when I told him what I was doing.  A few minutes later he came back over and gave me a bowl of fresh fruit salad and wished me luck.

The next section to the summit follows the Humuula Trail (or Mauna Kea trail), 6 miles and 4800 feet of ascent.  You’re supposed to register at the visitor centre.  I forgot to do this.  I set off now at what I felt was a good walking pace.  No need to jog now, I had plenty time, so I thought.

A short way up the road I turned left on to the trail.  This is where the fun part of the day started.  Above the clouds in cool sunshine.  So exhilarating!  Views around the nearby slopes and out across the cloud to the broad expanse of Mauna Loa.  From one 'island' looking across to another.  Sparse vegetation got sparser until there was none at all, complete desert.  The only people I saw were a father and son, descending and looking for a spot to cut across to the road and meet the rest of the family.

Surroundings so exhilarating and yet my legs seemed lacking in their usual enthusiasm.  I had to will them to continue.  The further up I got, the more rest stops.  I had to push hard, no rest until after the next trail marker, or around the next bend, past the next boulder.  How long could 6 miles take?  Twice I sent messages to my wife: sorry, running a little late now...  By the vagaries of texting to international phone numbers, these messages never went through.

It was a stunning scene when the summit cone came into view, with the telescope domes glistening in the brightness.  A few cars were visible motoring up the final hairpin bends.  They looked so small in the distance.  My poor legs still had work to do!  Eventually, finally, I got up the last bit of road.  My wife was there with our rental car, waiting with a couple of overseas tourists who had kindly stayed with her while wondering when I was ever going to appear.  Okay, nearly an hour and a half later than predicted.  We talked briefly then I realised I should get over to the summit proper, making it just less than 14 hours since zero hour.  I took a few photos.

We stayed on to see a beautiful sunset. 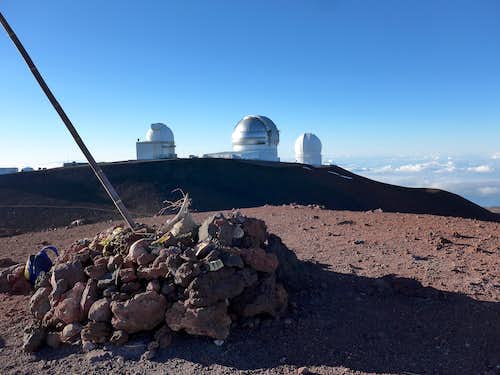 Some notes for those who wish to try this challenge for themselves.

I only thought of doing this run three days before doing it.  I had a look on the internet and, at that time, did not find any reports of people running up Mauna Kea from sea level.  On maps I could not find any alternative to simply following the road all the way to the visitor centre then taking the trail to the summit.  This was a little disappointing for me -- I would prefer to run all trails if possible -- but at least it was a low-risk route and required no support.  I just needed my wife to drive up the mountain and meet me at the summit.

I did not have time to recce the route.  I had worked out that I could get water at the Ellison Onizuka Visitor center (and food if needed), but could not depend on getting any water between Hilo and the visitor centre, a distance of 34 miles with 9200ft ascent.  I went to a supermarket and bought several bottles of water (total 4 litres) and two packets of sticky cinnamon buns, total 8 buns.  Indeed there is no water available anywhere on this route except at the visitor centre.  No running creeks, no restrooms, no diners, no Maccas, nothing.  4 litres water turned out to be sufficient to get to the visitor centre.

I did not do special training for this.  For someone with the right kind of fitness, it is not too hard.  Support is unnecessary as it is mostly on a road; even on the final section of trail, the road is not far away.  However, I suspect this run would not suit some marathon runners.  I do almost all my training on rough trails with many steep sections and deliberately seek out steep hills to run up.  Also I do various endurance events.  I think my cardiovascular fitness is pretty good -- I’m sure this helped me cope with the altitude.

Main concern beforehand was with altitude.  I live at sea level and have practically no experience with altitude.  I read alarming things on the internet about altitude sickness.  I also read something reassuring: that a quick one-day foray to altitude is not a risk, except that you might get out-of-breath.  Turned out okay for me.

Since doing this run, I discovered that Hawaii-based ultra-runners have in the past done sea-to-summit runs on Mauna Kea.  See: www.hurthawaii.com/2007/07/mauna-kea-squar.html.

See www.strava.com for reports of cyclists riding Hilo to the summit.