Hiking the Inside Passage Cruise 2013 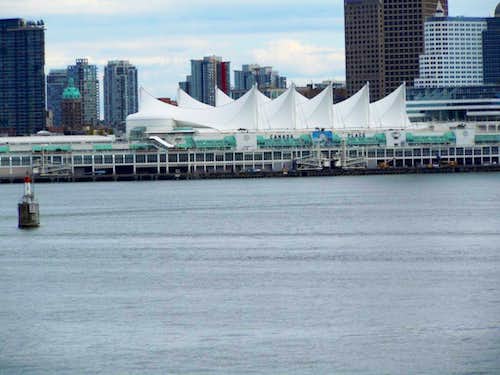 Canada Place Pier
On June 19, 2013, my wife and I headed to Vancouver, BC, to start a 14 day Alaska cruise adventure consisting of a 7 day passage north to Whittier, AK and a 7 day passage south back to Vancouver. We had never done this itinerary before and found that it offers considerably more time in the standard AK ports of call…Ketchikan, Juneau, and Skagway as well as two days each way of cruising into glacier formed bays. The longer port visits are great if you want to engage in ambitious day hikes.

This trip was also different in that it was taken several months earlier in the season than we normally have cruised to these ports and this resulted in much more snow in the higher elevations. 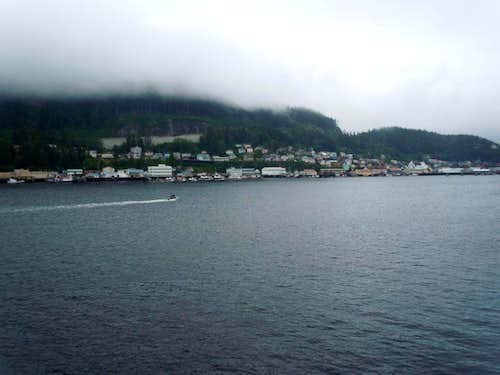 Deer Mountain in clouds
Our first port of Ketchikan found us hiking up the familiar Deer Mountain trail in a cloud on a misty day. 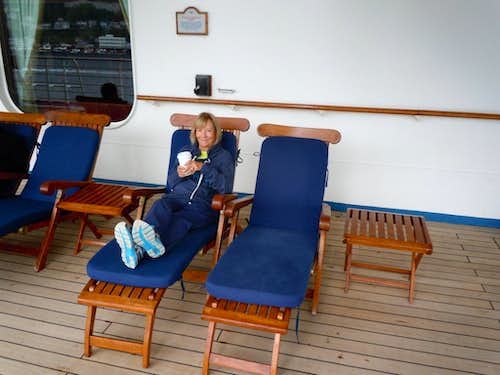 Relaxing after Deer Mtn hike
Having found a small snow field near the summit in the past, I brought along my ice ax. However, by the time we were at about 2,500’ elevation, the mountain was pretty much covered by steep snow fields and crampons would have been useful to proceed safely in the icy, compacted snow. We probed for an alternative route briefly before retreating back to the ship without completing the final 500’ to the summit.

In Juneau, the next day, we were some of the first to head ashore (in the rain)since I was hoping to climb Mt Jumbo(Bradley) on Douglas Island which is just across the Gastineau channel from the piers in Juneau. 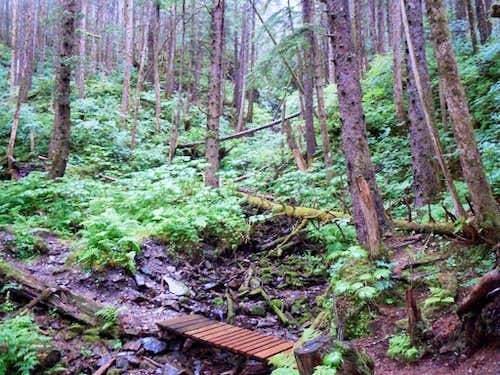 trail scenery on Douglas Island
My wife hiked with me for about 1 ½ miles across the bridge to Douglas Island before turning back to do some shopping in Juneau. I continued on another 2 ½ miles to the trailhead for Mt Jumbo. 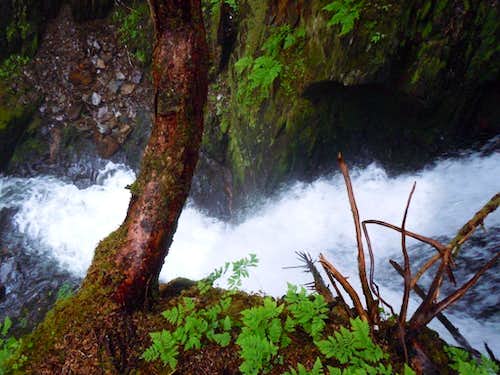 stream by the Mt Jumbo trail
The trail is quite unique and starts out rapidly gaining elevation before heading south along a smooth pathway for perhaps a ½ mile. It then turns west and again starts climbing before reaching a boardwalk. 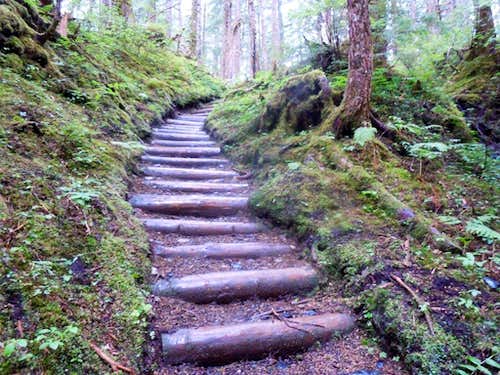 stairs
This is literally a board walk constructed of 2 X 12 rough cut lumber and stretching about a mile through a marshy area! 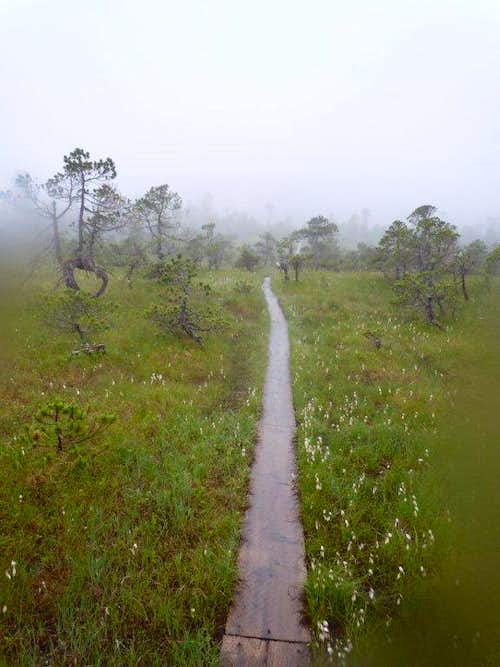 boardwalk
After you reach the end of the boardwalk the climbing gets more difficult and I went up to about 2,000’ elevation where again I ran into steep snow fields which covered the trail and made progress impractical without crampons. I once again turned around and headed back to town. 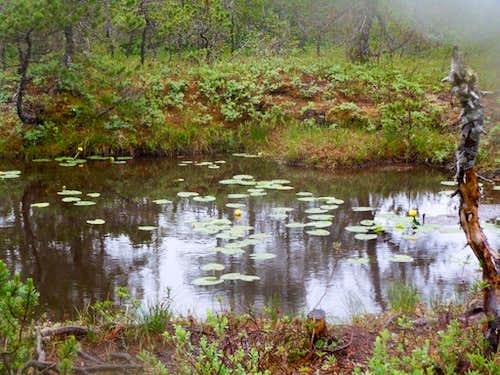 water lillies by boardwalk
When I reached the main road in Douglas, I stuck out my thumb and was rewarded with a ride almost immediately by a resident who took me right to the ship. 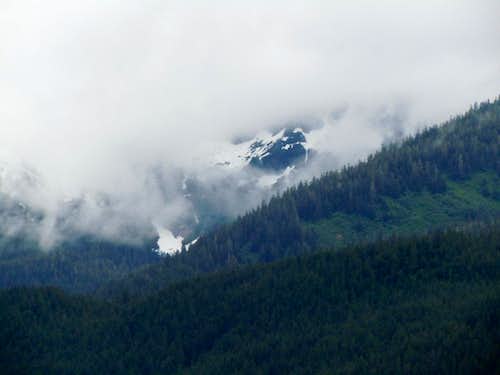 Jumbo Peak in the clouds
After lunch, we walked back into Juneau where I found a new pair of Black Diamond crampons in the Foggy Mountain climbing shop! It was becoming obvious that I should have packed my crampons for this early season trip!!

In Skagway the next day, I headed up to Upper Dewey Lake to see what the conditions above 3,000’ elevation were. 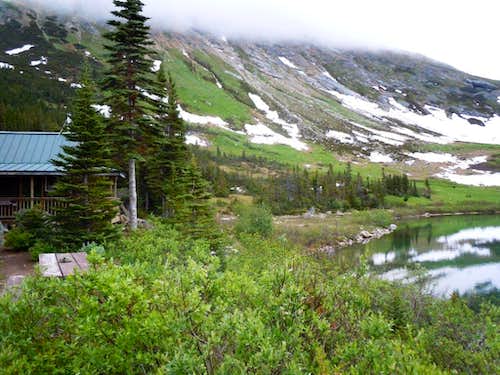 No Name Peak in clouds
There was some snow patches, but the melt had made them negotiable and a bonus to being early in the season was the brush was not very high yet and bush whacking was much easier than later on. 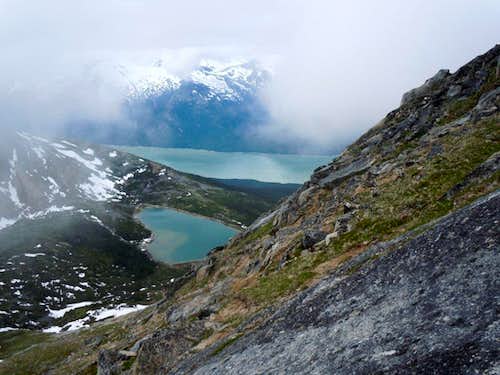 steep hillside above Upper Dewey Lake
I headed around the lake and started up a ridge that looked promising for accessing No Name Peak. 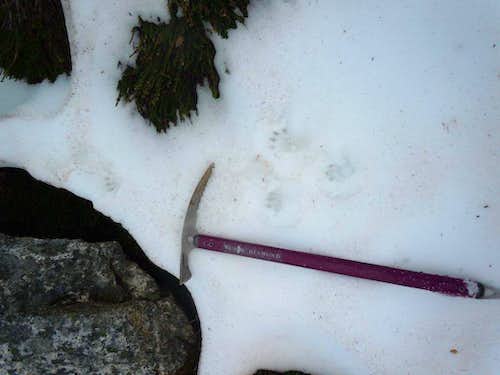 tracks in snow
The weather, however, was what it usually seems to be and clouds starting surrounding me as I reached the 5,000’ elevation. Not wanting to be trying to find a descent route in the fog, I again retreated and headed back to the ship getting back in 5 ½ hours. 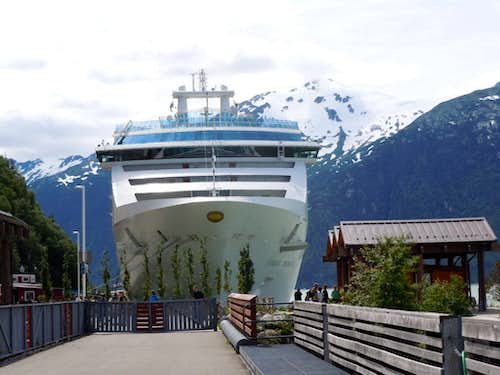 The next two days were a welcome recovery period as we cruised into Glacier Bay first and then into the College Fiord the next day. 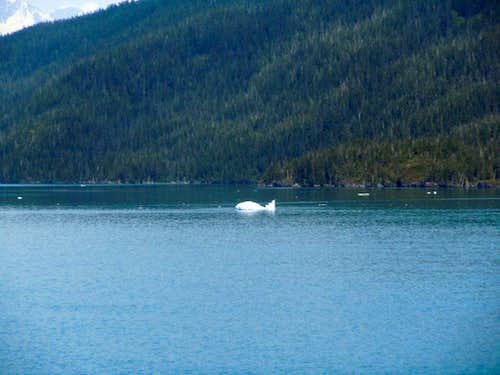 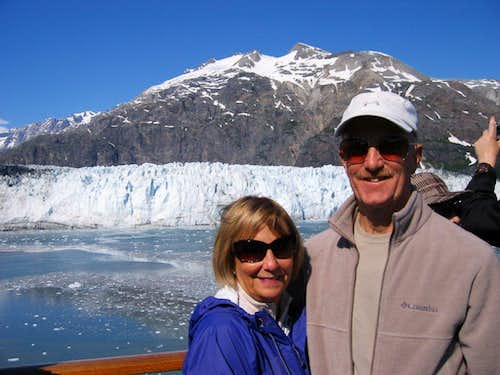 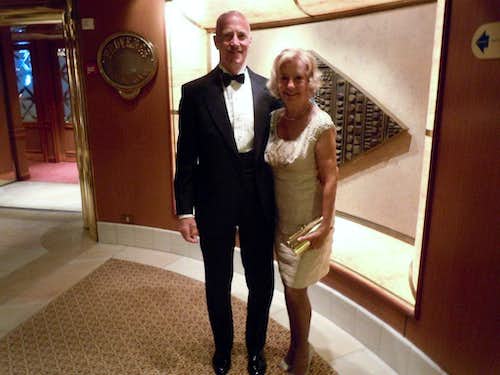 Route to Maynard Mountain
On 6/26, we arrived at Whittier about midnight and I was off to climb a mountain by 6 am when the first passengers were allowed to disembark. My initial plan was to attempt to find a route to Baird and/or Bard Peaks, but the passenger train was blocking the access that looked most promising. I started down W Camp road to look for an alternative approach and headed up the Portage Pass trail. From the pass, the approach was unreasonable so I headed the opposite direction to try my luck on Maynard Mountain which is the mountain where the train tunnel goes through to the Turnagain Arm of the Cook Inlet near Mt Alyeska and on to Anchorage. It is a difficult scramble up the mountain initially, but once I gained several thousand feet, I reached large snowfields which headed for several miles up and along a ridge to the summit. This was the first opportunity I had to try out my new crampons and they preformed superbly up some approximately 70 degree slopes and along long stretches of traversing ascents. The most exciting part of the trip was finding my way back down the steep, cliffy hillsides above Portage Pass. I sure didn’t want to miss the start of our 7 day southbound trip! The climb took 8 hours and it was my first summit of the trip. 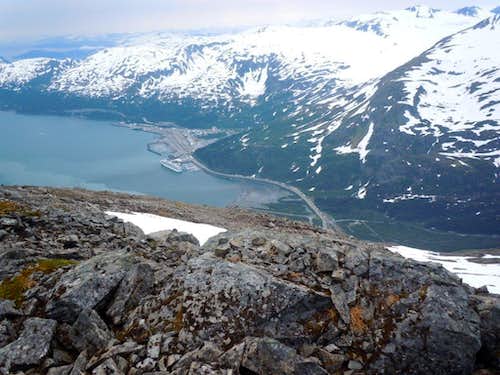 Once again, we had a nice recovery period the first two days sailing south with the first day spent in the clouds trying unsuccessfully to access Yakutat Bay to view the Hubbard glacier. The second day the weather improved and we again sailed into Glacier Bay and enjoyed the sights.

On 6/29, we arrived back at Skagway and I once again headed up to Upper Dewey lake to try one of the twin Dewey Peaks. I returned to the area which I had climbed the prior week and headed all the way to the top of the ridge where there was a notch with a peak on either side. Initially, I tried the one on the left thinking the summit was just beyond what I could see. Unfortunately, while there was a summit cairn and a view toward the town, the opposite side of the notch had the true summit. 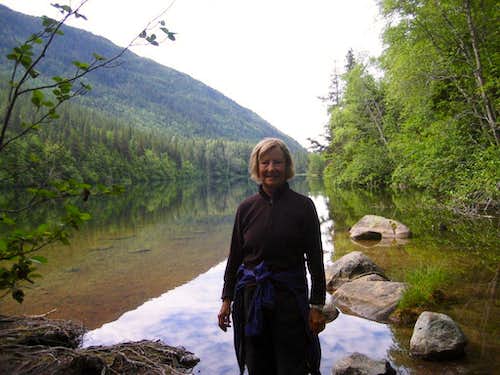 
After climbing back to the notch, I tried to find a route to the true summit and was forced to descend a couple hundred feet and traverse over several gullies before reaching the ridge top again. From there the climbing was very technical and after taking off my backpack for some difficult pitches, I reached a final crux that was slightly overhanging and which I did not feel it would be possible to down climb. Thus I once again retreated carefully back to my backpack and started back to the ship.

At that point, just below the summit cliffs, I found a Pentax 35 mm SLR which had been dropped from near the summit along with a hat and small fanny pack. These items were close to each other and had obviously been there for a long time as the material was disintegrating and the camera had rust in places. My initial reaction was to look about for some bones as well, but none were in evidence. I carried the camera back with me and on the ship the photo shop folks helped me figure out how to open it. Unfortunately, the film, which had been used about halfway, was totally disintegrating and any thoughts of having it developed to find a clue as to the owner were dashed. This trip took about 6 ½ hours mainly due to the mosquitos which kept me on the move almost the whole way. My wife, Pat, did a great hike up to Lower Dewey Lake with a couple she met near the trailhead. 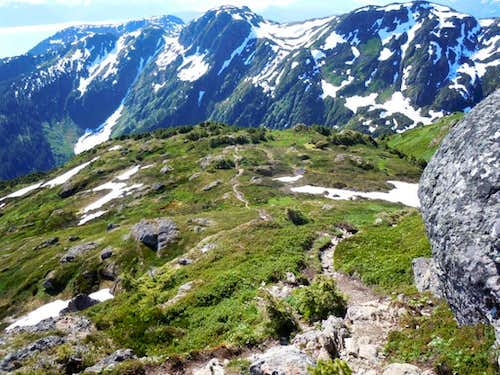 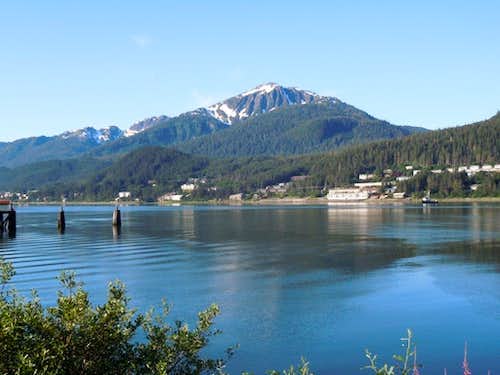 Mt Jumbo on a sunny day
The next day, 6/30, we arrived back in Juneau and once more I was among the first passengers to head off, walking toward the bridge over to Douglas Island. The weather was perfect this time and I was able to see all the peaks I have previously climbed in Juneau for the first time! When I crossed over the bridge, I tried thumbing a ride and was again successful almost immediately when a resident who had lived there most of his life gave me a ride right to the trailhead saving 2 ½ miles of hiking for my climb. In the space of a week, so much snow had melted that I didn’t need the crampons and only used the ice ax for a couple brief snowfield crossings. The summit was sweet and I am learning that reaching a summit in Alaska is usually a big challenge. When I returned to the trailhead, I walked into town and took the bus from the Douglas post office back to Juneau for $2 feeling very satisfied with my efforts this trip. 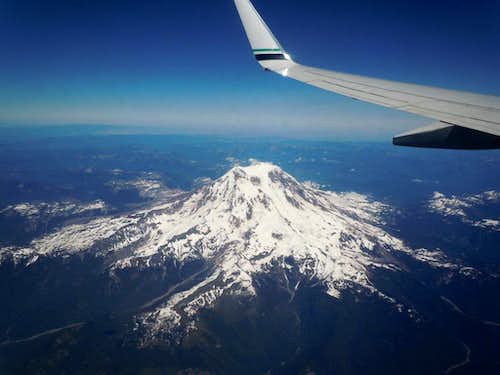 Mt Rainier 7-3-13
The next day, we were in Ketchikan again, but Pat and I decided to take it easy and walk about town for awhile. There remained a sea day and then the travel back to Vegas where the temps were running hot at about 117 degrees. As we descended to our landing, we could see the large fires on the west slopes of Mt Charleston and at home we discovered ash from the fire had been settling on our patio and pool. The next night was July 4th and after enjoying the fireworks, we looked up toward Griffith Peak and could see the flames along the ridges as the fires consumed the bristlecone pine trees and brush. It was quite the contrast from the prior 2 weeks of temps in the 50s and mountains full of snow and rainy days interspersed with sunny ones.