This is the mountain that rises behind Kailua-Kona that seems forever shrouded in mist and clouds. It's the third most active of the five major volcanic regions on the island, last erupting in 1801. The Kona airport is built upon the lava flow from the last eruption and volcanologists say that it's only a matter of time before it erupts again. The entire Kailua-Kona area could some day be in jeopardy from increased activity from the mountain and some say activity is now overdue. The mountain extends from Kiholo Bay about 19 miles north of Kailua-Kona to the Honalo area, about 9 miles to the south. Beyond those points one is not any safer, though, since you enter the domain of the second most active volcano in Hawaii, Mauna Loa - also considered to be overdue for an eruption. 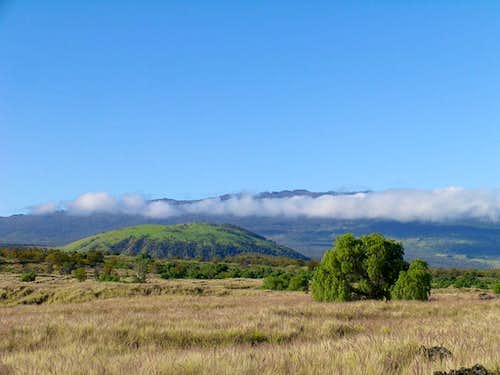 The north side of Hualalai from the highway about 12 miles south of the junction with the saddle road. That's Pu'u Wa'awa'a (aka: the Jello mold) in the left foreground. (The scale of this terrain is hard to see - for instance - Puu Wa'awa'a rises 1,300 feet above the surroundings!)

For the time being: Hualalai’s summit area is a hiker’s paradise with dozens of volcanic collapse craters of all sizes and ages. Some of the area is barren lava rock or cinder fields but most of it has some vegetation in the form of bushes, ferns and grasses and even a few large O’hia Lehua trees all the way to the summit. Evidence of the presence of ancients Hawaiians in the form of rock walls and remains of the bases of apparent shelter structures are found in the summit area.

All of the collapse craters have at least some vegetation on the sides and at the bottom and one even has a respectable “vertical forest” of O’hia on its north-facing interior side. There are also a couple of large groves of Eucalyptus trees thriving near the summit.

Curiously, at the true summit there is a benchmark that reads “Hainoa” (the name of the largest of the summit pit craters) and at a lesser summit (~ 8225’) located near the crater rim about 4/10 mile from the high point is a benchmark reading “Hualalai”. In addition, the USGS website gives wildly inaccurate elevations for all of the named summit features.

Low on the north side of the mountain at a crater called Puhia Pele (In Hawaiian, literally: “Blown out by Pele”) and also known as Pele’s Pit is one of the deepest structures of its kind anywhere in the world and has been explored to a depth of 862 feet. (Technical gear required!) This is easily reached with a ¾ miles hike along a gated gravel/dirt road north west from Hwy 190, about 4.0 miles north of the Hwy 180/Kaloko Dr. junction. (At MP 30.2) Puhia Pele was formed during the most recent eruptions of Hualalai in 1800-1801.

The Bishop Estates owns most of the land on and around Hualalai and reportably routinely denies access to hikers but it seems there is seldom anyone there to enforce any claims of ownership. I saw no signs stating “No Trespassing” but then I did some bushwhacking so may have missed them. In any event, be aware of the possibility that this may be legally off limits. Other hikers have reported no trespassing signs and Hawaii property maps show the entire mountain to be owned by Bishop Estates including the summit area.

From Kailua-Kona take Hwy 190 NNE to the Palani Junction (Hwy 180) and continue north. In exactly one mile, turn right on Kaloko Dr. and head up the hill. In approx 6.4 miles of relentless uphill travel, turn left on Huehue St. and go another 7/10 miles to the end of the road. This road is wide, smooth and paved all the way to the end. Park, find the gravel/dirt road, and head up the hill. The hiking route follows this road all the way to the summit craters. From there, follow the obvious bootpath (on the right) up to the summit. Again, there may or may not be notice posted that this is Bishop Estate land so be aware that you might be trespassing.

Another possible route is from the Pu'u Wa'a Wa'a trailhead off hwy 190. This is much longer but doable given an early start. Depending on your route and what you visit in the summit area, this is from 21.5 to 25 miles round trip and about 6,300 vertical feet of elevation gain. Google it and you should find some info.

Most, if not all of the route to Hualalai's summit passes through land owned by the Bishop Estates which routinely denies permission to hike/climb this peak. Enter at your own risk of being caught.

Puhia Pele (map) is a small vent structure of moderate interest on the lower northwest flank of Hualalai. It lies just off the road (Hwy 190, Mamalahoa Highway) and is easily accessed with a short downhill walk of less than a mile.

Puhia Pele means “Blown out by Pele.” It is a great example of a spatter cone along a fissure or small rift. There is spattered tephra all over the place on the cone and it has the general appearance of a red and black slag heap. The (last) eruption of Puhia Pele occurred in 1801 and was associated with the Kaupulehu Crater eruption. Kaupulehu Crater is located at 6140 ft higher up the slope. The association is understandable given both volcanic features are located on the long northwest ridge of Hualalai. This ridge is pocked with craters as if along a rift.

There is a deep hole in the top of Puhia Pele akin to the extraordinary one atop Luamakami (these are apparently the only two such crater pits on the island). But, while Luamakami’s pit is frightening to stand next to the way it drops vertically into a black abyss, Puhia Pele’s pit is a bit more relaxed and not so sharply defined. It doesn’t seem as deep as Luamakami, although it has apparently been explored to a depth of over 800 ft.

The Puhia Pele area is a great diversion if you’re in the area driving by. It is not worth traveling all the way around the island to see. And there is one thing about it that is not enjoyable: there’s animal excrement all over it. I mean ALL over it. It’s as if wildlife uses it for its toilet. We saw nary a critter on the thing, but maybe they use it by night. Because there is excrement all over it, Puhia Pele smells like Pele’s butt. Fortunately, the smell only lasts as long as you’re stomping around on the raised rock exposures. As soon as you exit to the small pahoehoe flows to either side, the air refreshens. Just be sure you don’t track any lingering poop into your car.

Getting to Puhia Pele
There are two approaches from the highway (Hwy 190). One is from the east from a starting point just north of milepost 30.2 where there is (currently) a gate just off the road with a white sign on it saying “Please close the gate behind you.” The second is from a road that junctions off across from the entrance to Makelei Country Club.

For the south approach from Makelei Country Club, opposite the golf course entrance, find a road that goes west about a block then turns progressively rightward (northward). In about a mile this road goes past the west side of Puhia Pele. This road is gated thus barring further driving, But I think you can walk this road with no problems.

For the east approach from the gate at MP 30.2, the idea is to park at the gate (it’s probably not a good idea to block the gate but it doesn’t look well used). The elevation is 1960 feet. Now walk down the sometimes steep road for 0.7 miles. You will be bearing NW. In about 0.5 miles a craggy mass will appear in front of you down the road. This mass is Puhia Pele. Continue down the road until you are exactly opposite (NE of) the summit. Here you can easily leave the road and walk over smooth(ish) pahoehoe lava to the base of the fissure. The distance from road to fissure is less than 200 yards. You will see it is a fissure once you climb up on it.

The north end of the highest mass (Puhia Pele) provides an easy access up to its top (elev. 1637 ft) by way of a rubbly then grassy slope of moderate steepness. Once on top, simply turn left to scramble up to the highest point (Class 2 and 3).

Not a suitable camping spot. Enjoy the beach!