There are more summits above 4500 m. in Iran than this list .
I put the names of those summits here that have been introduced in Summit Post . 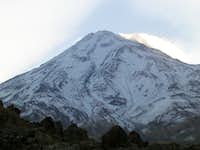 The seasoned traveler in Iran is so used to seeing gaunt, rugged precipice, jagged peaks and bare deserts, that the sight of Damavand is a relief and surprise to the eye. Visible From many kilometers away, though it is surrounded on every side by the peaks and ridges of the albroz, its superior height and singular outline compel attention. 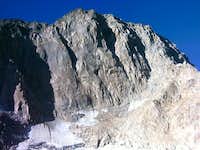 Alam Kooh is sometimes been written as : "Alamkouh", "Alamkoh", "Alamkuh", "Alamkooh" or "Alam kouh".  Alam means some sort of object standing straight like a flag and Kooh means mountain.

The north face (a little toward north-west) is actually a giant vertical wall. This wall and impression of climbing it, is what makes Alamkooh famous and demanded for Iranian climbers, these are some correct details about the wall :

There is a glacier named "Alamchal" at the base of the north face that slightly rises up to about 4200m.

Sabalaan is an inactive volcano in the north-west of Iran. It rises in the starting zone of the Alborz mountains. its geographical location is 47:50 E and 38:16 N.  One can write the name of this mount as: Sabalan or Sabalaan or Saawalan ,... . All of them are the same .

Many people climb it every year, the routine path is easy but there are also hard routs and glacial valleys.

A little lake is on the top of the peak, which is created in the volcano hole. this lake frizes 9 or 10 months a year. 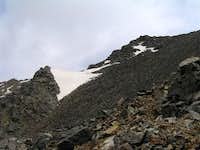 Mt. Alam Kooh is the second highest peak in Iran. Alam Kooh sits in the middle of the Takhte Soleyman Massif which has other peaks with comparable elevations. The upper portion of Alam Kooh is made of a one km (0.6 mile) long east-west running ridgeline that is entirely above 4700 m (15420 ft). The summit of Alam Kooh is a gigantic rocky block that occupies the western one-quarter of the ridgeline. To the east of it, there are other high points, some of which can be thought of as individual peaks in their own rights. These are known as the “Shakhaks” (Horns) of Alam Kooh. I have personally identified and numbered five such shakhaks as noted in the above pictures 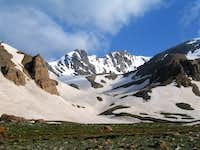 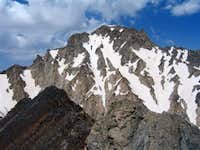 Takhte Soleyman means Solomon’s Throne (seat). It refers to a peak and a sub-range (massif) in the Central Alborz Mountains of northern Iran.
Takhte Soleyman is a prominent peak that rises to the north of the 4850 m Alam Kooh Peak which is the highest point of the Takhte Soleyman Massif.

Siah Sang is a black rocky peak that rises above the Alam Chal Glacier near the 4850 m Alam Kooh Peak in the Takhte Soleyman Massif of Central Alborz Mountains in northern Iran. To the west, a rocky ridgeline connects Siah Sang to the 4700 m Alam Kooh Shakhak #5 (Shakhaks refer to horn-like subpeaks of Alam Kooh). 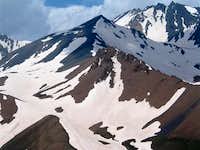 Towering above the Marji Kesh and Khersan Glaciers, Marji Kesh Peak is one of the many 15ers that form the core of the Tekhte Soleyman Massif. From the north, Marji Kesh is connected to the 4850 m (15912 ft) Alam Kooh Peak and its Shakhaks (horn-like sub-peaks). Despite an elevation that exceeds 15000 ft, close proximity to Alam Kooh causes Marji Kesh to appear, from some viewpoints, as an inconspicuous mountain that sits in the shadow of the giant Alam Kooh. 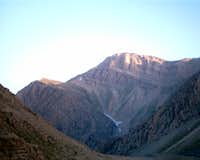 Dena (in Persian: DEna) is the highest peak (4550 m/16998 feet) of the Zagros Mountains. Dena Mountain is a part pf Zagroses situated on the boundary of these three provinces: Isfahan,Kohkilooyeh Va Boyer Ahmad, Chahar Mahal Va Bakhtiyari. This mountain range has more than 40 above 4000 m peaks of which the highest of all is Ghash mastan (Bizhan 3) 4550 m. Its other famous peaks are: Kal Ghedvis, Bizhan 2, Bizhan 1, Pazan Pir , Ghalam , Sichani , Tash barqi , Barf Kermo , Namak , HouzDall 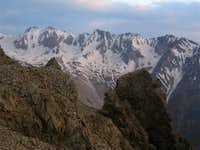 The Haft Khans are a series of jagged peaks that rise above the largest glacier in Iran in one of the remotest corners of the Takhte Soleyman Massif. Difficult access and rugged beauty give these mountains a mysterious and magical aura.

The main spine of the Takhte Soleyman Massif is made of a 19 km (12 miles) long ridgeline that is entirely above 4000 m (13123 ft). A branch ridgeline starts in the mid/southern portions of the main spine and heads northwest. This branch is 5.2 km (3.25 miles) long and is also entirely above 4000 m. Haft Khan Peaks rise on the crest of this branch.

Up to 22 peaks/high points have been identified along the length of the Haft Khan ridgeline. The most prominent of these peaks are (southeast to northwest):

more about Haft Khan no.1 mt. 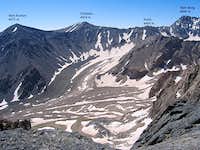 Chaloon is one of the central peaks of the Takhte Soleyman Massif. It rises above the tail end of the Alam Chal Glacier. To the north, Chaloon is connected to the 4472 m Siah Kamaan Peak and to the southwest, it connects to the 4604 m Siah Sang Peak (via a long ridgeline that gives rise to a nameless 4450 m high point). The western slopes of Chaloon are steep rocky/scree slopes that drop down to the bottom of the valley of Alam Chal Glacier.