Jacks Mountain is home to the famous "Thousand Steps" which are part of the National Heritage Trail. Jacks Mountain at 2,321 feet is quite a large mountain, especially for Pennsylvania. Also, when you consider that the base to summit elevation gain is 1,715 feet, you'll understand that you've got quite a hoof ahead of you. Jacks Mountain is located in PA's central mountain region, also known as the main range of the Appalachians. This area in Pennsylvania is quite rugged and the mountains are a lot steeper and higher than many people realize when they think of PA.

Located between Lewistown and Huntingdon, PA, this mountain affords magnificent views in all directions from its scree slopes. The little former-mining towns of Mount Union and Mill Creek are at its base. Also, the Juniata River cuts this mountain in two and creates one of the more rugged and spectacular areas in the state, known as Jacks Narrows. You almost get a western feel standing at the trailhead as the two mountains rise nearly 2,000 feet above you on either side. 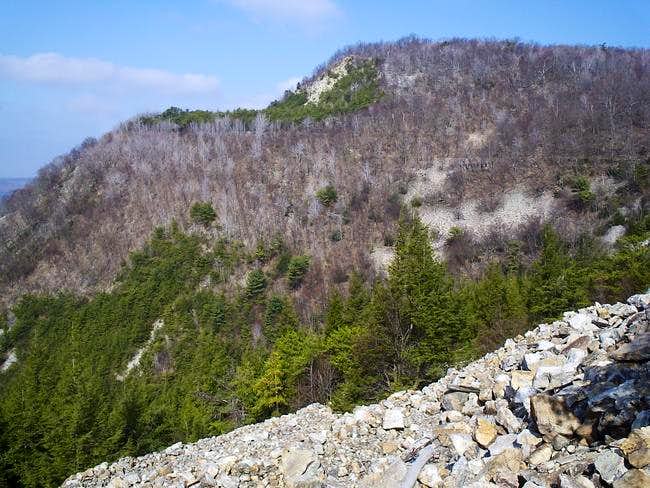 The Thousand Steps Trail is not something to be taken lightly. Just doing the steps themselves (going 1/2 of the way up the mountain) is quite a task on its own. You can compare this venture as an hour and a half work-out on a stair master as you will definitely feel it in your legs once you reach the top.

This mountain is also a geological wonder known for its fossils. There is petrified wood everywhere along this trail. Some of the actual steps themselves are made up of huge chunks of the fossils. This area was heavily mined from 1900-1950 which is partially the reason for the unearthing of all these specatacular fossils. The gully that is climbed by Thousand Steps will remind you of the White Mountains or the west when you see its high and steep ravine-like appearance. That is because it is a glacially carved cirque from the last Ice Age which receeded from PA about 10,000 years ago. There are plenty of other signs as well of the area's more recent geology such as the scree slopes that exist everywhere.

All the trails that run through this region are beautiful with nice views, but Thousand Steps is the king. The Link Trail is the longest running trail through this area and it is famous for being the link between the Tuscarora Trail and the Mid-State Trail. From the actual Thousand Steps area though you will have plenty of views and beautiful sights to keep your attention. This mountain is well worth a trip because it has every aspect that an interesting mountain should; history, challenge, views, interesting geology, and relaxation.

There are actually 1,043 steps in the Thousand Steps Trail. They were created in 1936 as a means of transportation to work for the miners high up on the mountain. I don't know what anyone else thinks, but having done this climb I think it is pretty incredible that this was the morning and evening commute everyday for the men who worked up on the mountain. Quite a commute!

The mining history in this area is very rich as sand was the most popular resource mined from Jacks Mountain. Mining for sand started on Jacks Mountain and in the narrows around 1900 by Harbison Walker Corporation and it continued until about 1950. The sand mined from the mountain was used for silica bricks which were heat resistant and at one point, Jacks Mountain was known as "The Silica Brick Capital of the World." Both sides of "The Narrows" on Jacks Mountain were loaded with railroad tracks and at one point six inclined planes existed. Harbsion Walker Corporation, at its height, employed 2,000 people and produced half a million silica bricks a day.

Jacks Narrows which is cut by the Juniata River also housed some of the most famous transportation means in the history of east coast transportation at one time or another. The PA Turnpike, Pennsylvania Canal, William Penn Highway, and Pennsylvania Railroad all passed through Jacks Narrows at the base of this mountain. This goes to show how important a roll Thousand Steps and Jacks Mountain had to the early 1900s industrial boom.

This moutain is accessed via PA Route 22/522.
From Harrisburg, PA:
Take Route 22/322 West from downtown Harrisburg or off of Interstate-81. Follow 22/322 northwest for 53 miles to Lewistown, PA where you'll want to take the exit for PA Route 22/522 (Mt. Union). From here continue for 23 miles through Mt. Union. The trailhead is at large parking lot on the right hand side of the road about 3/4 mile outside of Mount Union where you will see a Heritage Route sign. To the west should be the Juniata River and the high west wall of Jacks Mountain. This parking area is the only pull-off place going around the mountain. To get to the trailhead, walk all the way to the south end of the lot (towards Mt. Union) and the trailhead is just past the guard rail next to the Heritage Route sign.

From Hungtingdon, PA:
Take route 522 E (which actually goes south) from downtown Huntingdon for 9 miles through the town of Mill Creek. Continue on into Jacks Narrows for one more mile where you will see a pull-off on the left side of the road with a Heritage Route sign at the south end. To the west should be the Juniata River and the high west wall of Jacks Mountain. This parking area is the only pull-off place going around the mountain. To get to the trailhead, walk all the way to the south end of the lot (towards Mt. Union) and the trailhead is just past the guard rail next to the Heritage Route sign.

There are no permits or fees required to access the trails in this area. Parking is also free at the trailhead. Most of the mountain is on State Game Lands in partnership with the 'Save The Steps Foundation'. The only seasonal closures would be due to snow in the winter time, but even then the road is usually open. For wildlife and conservation purposes follow the “LEAVE NO TRACE” program and you will be fine.

The best time to climb this mountain would probably be in the early spring or mid-fall. The views are more expansive during this time as the sky is clearer and also in fall the leaves are changing (usually peak foliage is mid-October). This would be a great place to see the fall foliage.

The only thing you have to be careful of is hunters. Most hunters probably would not venture up to high on this part of the mountain because of its difficulty to get to, but once you reach the summit area be a little more careful. This mountain is a wonderful destination in all times of the year though and a good warm-up hike if you plan on going to the high peaks for vacation.

There is no camping in the area.

For current and up-to-date weather conditions, click on the link below!
weather.com

Not a glacial cirque

I am not aware of any alpine glaciers documented for this part of PA, and thus the deposits on and topography of Jack's Mt., if glacially related at all, are most likely due to frost action associated with glacial fronts over a 100mi to the NE.

Jacks is the biggest

I am for PA and have studied the mountains quite a bit, Jack's Mountain form the flat's by Mount Union High School's playing fields (520 ft.)to the top off the 2321 foot summit is the highest elevation gain in the state. I always judge a mountain on its true size from bottom to top... By the way, North Mountain in Sullivan county close to Muncy Valley (Although higher in elevation at 2600 ft.) is a close second