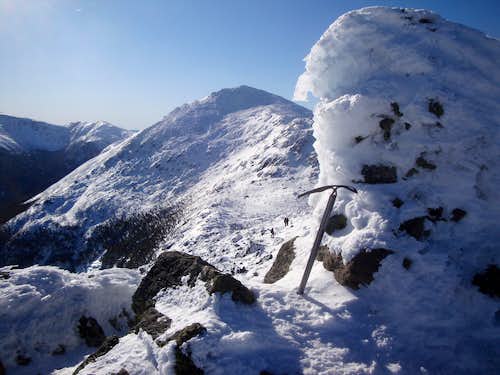 Looking at Mount Adams from the summit of Mount Madison. January 23, 2010.

Mount Adams, the second highest peak in New Hampshire (after Mount Washington), dominates the northern Presidentials. To the northeast of it lies Mount Madison, and to the southwest lies Mount Jefferson. It has two significant subsidiary peaks, Mount John Quincy Adams (5394 feet, 44.324°N, 71.289°W) lies to the east of the main peak, overlooking the Adams-Madison col, Madison Spring Hut and Star Lake, while Mount Sam Adams (5584 feet, 44.322°N, 71.301°W) lies to the north, overlooking Thunderstorm Junction. The summit is a jumble of rocks that rises over 1,000 feet above treeline, with spectacular views in all directions.

Because of its spectacular views, challenging climb and consequent relative lack of crowds it is a favorite of strong hikers, many of whom combine its ascent with that of Mount Madison.

By any route the scramble to the summit is an easy Class 2 rock-hopping climb. The main routes are otherwise Class 1, though there are a few Class 2 routes that are less commonly used. All routes involve about 4 to 5 miles each way, with an ascent of about 4,500 feet. 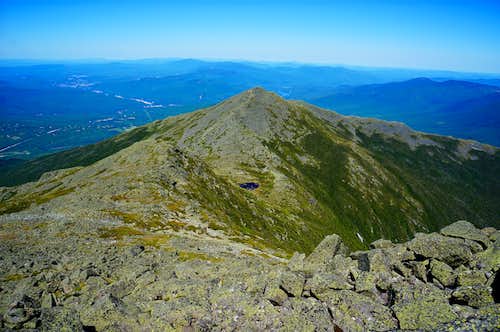 Quincy Adams and Madison from the summit of Sam AdamsJune 2012

The easiest route is by the Valley Way trail, from the Appalachia trailhead to Madison Spring Hut. It rises constantly at a moderate grade, gaining 3,500 feet in 3.8 miles, but with no very steep sections. From the hut follow the Gulfside Trail until it intersects with the Airline Trail, coming up from the same trailhead (Appalachia) as the Valley Way. The Gulfside and Airline trails coincide for a short distance, then the Airline Trail branches off to the left to ascend to the summit. This route is 4.7 miles (one way) with an elevation gain of 4,500 feet. Climbing Mount Madison from the hut will add one mile (round trip) and 500 feet of elevation gain.

Another very popular route is the Airline Trail, also starting at Appalachia. It is shorter, hence steeper, than the Valley Way, but in exchange it has has great views down into King's Ravine from the "knife edge" of Durant's Ridge. I put the words "knife edge" in quotes, the exposure there is minimal, the views great. This trail climbs the 4,500 feet in only 4.3 miles.

It is common to make a loop, going up the Airline Trail and down by the Valley Way.

Rounding out the standard routes is Lowe's Path, which starts at Lowe's Store. This route rises 4,450 feet in 4.7 miles. This appears similar to the Valley Way approach, but Lowe's Path has several sustained steep and rough sections, making it less easy than the Valley Way. 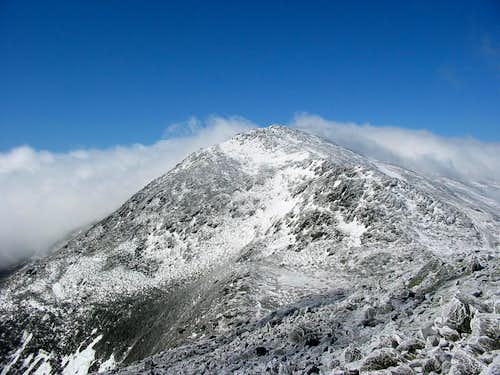 The classic scramble routes all go through King Ravine, a large glacial cirque on the north face of the mountain. King Ravine is normally approached from the Appalachia trailhead by the Airline, Short Line and King Ravine trails. There are three trails that rise from the floor of the ravine, all Class 2 or easy Class 3 climbs.

The easiest is the Chemin des Dames, which goes to the left and climbs to meet the Airline Trail. The middle trail is the continuation of the King Ravine Trail, it ascends the headwall to meet the Airline Trail much higher than the Chemin des Dames does. The right trail, the Great Gully Trail, is the steepest of the three, and emerges from the ravine at Thunderstorm Junction. 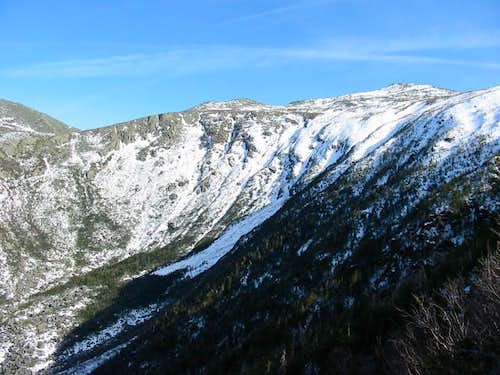 This is the classic "big hike" in the White Mountains, and many people attempt it around the Summer Solstice, when the days are long. The most usual route is from north to south, going up the Valley Way, then along the Gulfside and Crawford Path, looping over all the summits (Madison, Adams, Jefferson, Clay, Washington, Monroe, Franklin (optional), Eisenhower and Pierce). This is a 19.8 mile hike with 8,500 feet of elevation gain. For more information check out my Presidential Traverse and Similar Insanities FAQ.

The view from Mt. Adams in mid November 2007.Very rare bluebird skies made for a stunning hike up Adams and then over to Jefferson and down the Castle ridge, on my first ever Presidentials trip (certainly not the last one either!) 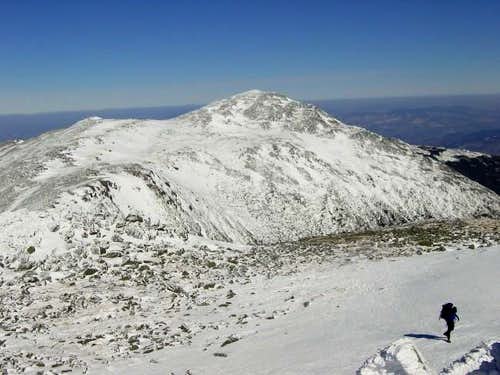 The normal hiking season in the White Mountains extends roughly from Memorial Day to Columbus Day. Winter conditions in the presidentials are harsh, but for those with the required knowledge and experience a winter ascent of Mount Adams can be a wonderful experience. It should be noted to bring an ice axe, crampons and even snowshoes whenever you are attempting Mount Adams in winter. Also you must be prepared for extreme conditions. Use common sense when climbing this mountain in winter. When they are calling for bad weather do not choose this mountain or any other mountain over timberline in winter. 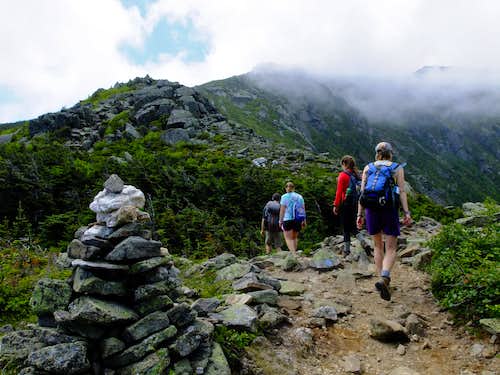 Note that the Madison Hut is closed in mid fall and winter, while the RMC facilities are open year round. Gray Knob is moderately heated in winter, the others are not. 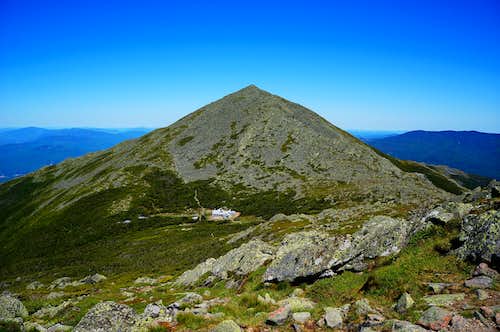 The Madison Spring Hut
The AMC's Madison Springs Hut is located at the end of the Valley Way. It allows a relatively easy two day trip to both Madison and Adams. It may also be used as part of a three day (two nights) Presidential traverse, spending the other night at Lakes of the Clouds hut.

The Valley Way campsite, maintained by the White Mountain National Forest off the Valley Way trail, has a couple of tent platforms. It is a backcountry alternative to Madison hut for those who wish to do Madison, Adams or both as an overnight trip.

The Randolph Mountain Club (RMC) has four shelters in the area:Log Cabin, The Perch and Crag Camp (see map for their locations). Fees are charged at all of them (follow the link for each shelter), and no reservations are accepted. All four RMC facilities can be used for overnight trips to Adams and either Madison or Jefferson.

For more information on these facilities, and for ideas on overnight trips, check the Madison, Adams and Jefferson page of the Peakbagging 4000 footers in New England web site.

The best source for forecasts is the Mount Washington Observatory.

In winter the Randolph Mountain Club posts conditions around their cabins at Crag Camp and Gray Knob. These include snow depths and the condition of the major trails. Unfortunately these reports are only updated once a week (usually on Thursdays).

The Appalachian Mountain Club has an information phone at Pinkham Notch Visitor Center: 603-466-2725.

In winter you should consult the trip reports posted on the Views from the Top NH Trail Conditions forum before a trip. If you find nothing you can post a query on any of the following forums (they share viewers, it is considered poor form to post to more than

Maps and Other Books