The intent of this page is to describe the rock climbing around the Jasper area including providing detailed route information. There was a guidebook for the Jasper area called “Jasper Rock” written by Dave Robinson, but this book has been out of print for over 5 years. Another guidebook has been in the works for over 3 years now, but never seems to materialize, causing much frustration from local and visiting climbers. My intention with this page is to slowly build up a well-documented site that will describe the most popular climbing areas in the Jasper/Hinton area. As new routes and areas are developed, I will endeavour to keep this page updated.

In general, the Jasper;Hinton area has a nice selection of climbing including steep limestone bluffs, slabby limestone cliffs, some stellar quartzite crags, as well as multi-pitch limestone and quartzite walls.

In Jasper you will not find the crowds that you do in the Banff/Canmore/Lake Louise area – running into another party or two at a Jasper crag is actually a pleasant social experience. I’ve been climbing in this area for 15 years now and have yet to wait in a line for a route or felt crowded.

Jasper and Hinton can be easily accessed either through Edmonton on Highway 16, or from Banff via Highway 93 and the world famous Icefield Parkway. From Edmonton, Jasper is about a 4 hour drive (Hinton 3 hours) and from Banff it’s approximately 3.5 hours.

There is a hostel right in the town of Jasper. In addition, there are hostels along the Icefield Parkway (Highway 93).

There are also a number of nice campgrounds around the Town of Jasper, as well as campgrounds further outside of Jasper (along the major highways). For those with a little bigger budget, there are numerous hotels/motels to choose from in Jasper and Hinton. This link provides additional information on camping, hotels and hostels in the Jasper Park area.

The climbing season usually starts in April on some of the southwest facing limestone crags like the Juno Wall and the Boulder Gardens. By the time early October rolls around, it’s normally time to get out the ice climbing gear.

The best time to climb is in late July, August and early September. May also tends to be a decent month, but June can be chancy with afternoon showers fairly common. It is very rare however, that it will rain all day in Jasper, and even rarer that you have two days in a row with no climbing windows.

Another nice feature about climbing in the Jasper/Hinton area during the summer, is that it is rarely (almost never) too hot to climb. Temperatures over 30 degrees Celsius (86 F) only occur on one or two days a year, and sometimes never. Even when it is hot, there are cool crags to climb at higher elevations along side of roaring creeks.

You do need to have a Park Pass while in Jasper National Park, which is purchased when you enter the Park. The cost varies depending on how long you are going to stay.

There is little red tape in Jasper with respect to the climbing. Bolting has not yet been an issue at the crags that have been developed; nor does it appear to even be on the radar screen of Parks Canada (yet). Obviously, things like cutting or removing trees and other vegetation in the name of route development is illegal and must be avoided at all costs. 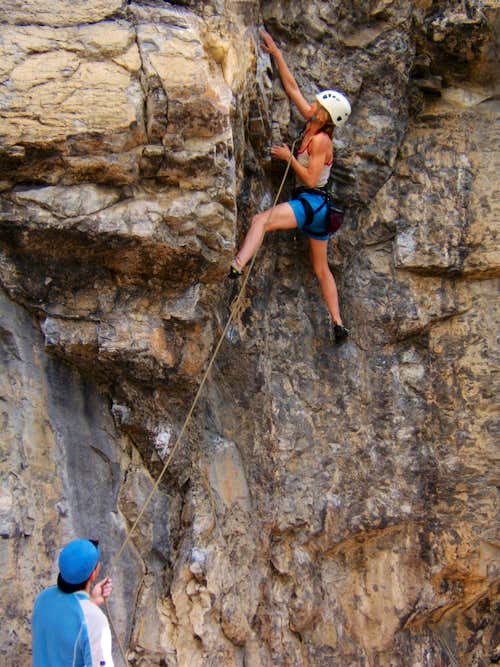 The classic "Band-Aid Box" at the Rock Gardens

The following areas have the most route development in the Jasper area. Although I currently do not have information for all of them yet, I will continue to populate this page throughout the winter (2008). Hopefully, by the climbing season in spring 2008, I’ll have information on all the most popular areas and will continue to add additional areas as I get the information. I will try to draw topos and have route descriptions for all the popular routes at these areas.

Juno Wall – This is also another relatively new area and not included in the old guidebook. There are one and two pitch climbs here on solid grey limestone. There are 20 pitches of climbing at the Juno Wall – and due to its southwestern exposure it is one of the first places to climb in the spring.

Rock Gardens – Steep limestone climbing on bolted routes. There are over 50 routes here, with the largest proportion being in the 5.10, 11s and 12s. All the routes are one pitch and average 20 metres in height. Although it is possible to toprope some of the routes, it’s difficult and can be dangerous to set up.

Boulder Gardens – Steep limestone climbing on bolted routes – routes are short (averaging less than 10 metres in height) and bouldery. There are about 14 routes here – some with a sunny aspect, making it a good place to climb early season.

Lost Boys – Quartzite climbing at its finest. This crag is steep, but the climbs usually are not sustained – the cruxes are normally pulling some type of roof. There are primarily bolted climbs here, but there is a good selection of trad and mixed routes. There are over 65 routes here – most of the routes are in the 5.10 and 5.11s.

Hidden Valley – This is a spectacular box canyon. There is a selection of over 60 bolted, mixed, and trad climbs all on limestone (which varies in quality). Climbing tends to be a bit more adventurous here (some 2 and 3 pitch climbs) – it can also be extremely windy.  One area of Hidden Valley,  called "Rec Beach" can be accessed relatively quickly from the highway and contains a number of high quality fairly hard sport climbs.

Watchtower – This is a relatively new area developed after the guidebook was printed. It is a very steep sport climbing in a narrow limestone canyon split by a roaring creek. There are over 25 routes in this area – all less than one pitch in length, most being 5.11 and up, but there are a selection of easier routes.

Dune Wall – A quartzite climbing area accessed from the Edith Cavell parking lot. This crag has more of an alpine feeling, sporting both multi-pitch trad routes and fun one pitch sport climbs. There are over 20 climbs here. This area has a short season and there is hazard from rockfall.

Benson Ridge - This is a large limestone formation consisting of multi-pitch trad climbing. It faces south so is a good early season climbing area.

Ashlar's Ridge - This is another large limestone wall that faces west. There are only three known routes on this wall right now and the potential for new routes is still untapped.