This is work in progress.
Thank you for your patience. 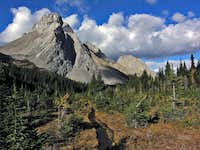 Canadian Rockies is probably the most impressive section of the Rocky Mountains. It is oriented southeast to northwest, along the Continental Divide for about 600 km with a breadth of about 120 km.

This height of land separates rivers flowing to the Atlantic and Arctic Oceans from those flowing to the Pacific Ocean. The Canadian Rockies actually feature a hydrographic apex or triple divide with the Columbia Icefield’s summit: Meltwater from Snow Dome (3459m) flows down the Athabasca and Mackenzie Rivers to the Arctic; the North Saskatchewan and Nelson Rivers to the Atlantic; and the Columbia River to the Pacific. A phenomena that occurs at only one other known place on the globe.

Canadian Rockies borders are reasonably clear and delimit the continuously alpine section of the Rockies in the Canadian territory (also known as the Continental Range). The northern limit is McGregor Pass where McGregor River and kakwa River have their headwaters (Kakwa Provincial Park) and where the Far Northern Rockies start. The southern limit is the Crowsnest Pass Cross-Strike Discontinuity close to the American border where the Central Montana Rocky Mountains start. The eastern edge is where the range rises directly from the Great Plains (Prairie). The western boundary is the Rocky Mountain Trench, a broad rift valley home to the Columbia River, dividing it from the older Columbia Mountains.

This range provides all manner of adventure from easy hiking trails to extreme Alpine routes. The highest point is Mount Robson (3954m). Although towering bellow the psychological bar of 4,000m (13,000ft) the Canadian Rockies are truly one of the great mountain ranges of the world and are unique in many ways. They feature countless impressive craggy and / or glaciated peaks, technically challenging and in a reasonably remote wilderness where moose, elk, mountain goat, lynx and bear roam free. 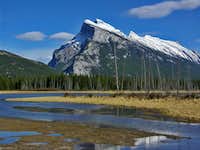 The Foothills are the eastern-most ranges of the Canadian Rockies and have a breadth of 25-40 km. They are characterized by ridges of sandstone where summits are often dome like. The rolling Foothills have summits towering beyond 2000m. 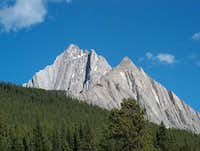 The Front Ranges are immediately west to the Foothills. They are characterized by long limestone ridges. Here, the rock formations have been inclined upwards and eastwards over the western edge of the Foothills they dominate by 1000m. Their limestone Strata usually display a pronounced drop to the southwest, as overthrust mountains (e.g. Mount Rundle, Sunwapta Peak) are typical of these ranges. Sawtooth mountains (e.g. Mount Ishbel) are another mountain type common here and dogtooth mountains (e.g. Mount Louis, Mount Birdwood, Mount Edith) could also be found. The average elevation of the Front Ranges is above 2500m and the highest point is Mount Brazeau (3470m) 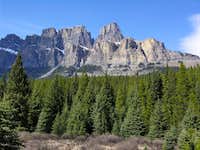 Here are most of the highest mountains and widest glaciers and icefields that make Canadian Rockies famous worldwide. The Eastern Main Ranges, also called the Park Ranges, sculpt the Continental Divide and dominate the Front Ranges by about 500m. They too, are characterized by layered sediments. However rather than being folded and inclined, the layers are almost horizontal. The formations are of resistant quartzite, limestone and dolomite separated by weak shale, resulting in “layer-cake” shape of castellated mountains (e.g. Castle Mountain, Mount Temple, Pilot Mount) so characteristic of the Eastern Main Ranges. Horn mountains (e.g. Mount Assiniboine, Mount Athabasca, Mount Fryatt) created by the effect of several cirque glaciers surrounding a mountain, are also common here. 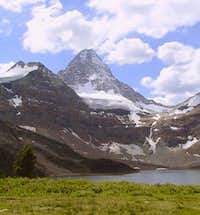 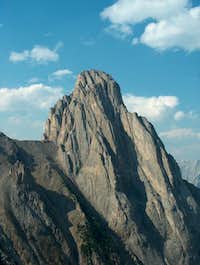 The Western Main Ranges are found west of the Continental Divide. The mountains here are usually steep on the northeast and gentle on the southwest but are not aligned in such a regular manner as in the Front Ranges. With the noticeable exception of the impressive 900m high Rockwall, a limestone cliff that stretches along the northwest boundary of Kootenay National Park, these ranges are predominantly characterized by crumbly shale. Thus, more subject to erosion, the mountains display less angular appearance than in the Eastern Main Ranges. Dogtooth mountains are also found here (e.g. Spike Peak). The summits are typically close to 3000m in elevation and the highest point is Mount Goodsir South (3562m).

The Western Ranges are a limited topographic unit running along the western margin of the Rockies from Golden to the south, between Columbia and Kootenay Rivers. Here, the rock formations have been tipped upwards and overturned past the vertical, resulting in a complex landscape that differs from the profile of Western Main Ranges mountains (steep on the northeast / gentle on the southwest). The highest peak of the Western Ranges, also called Kootenay Ranges, is Mount Sinclair (2662m).

About 35,000 km2 of the Canadian Rockies Wilderness (an area larger than Maryland or Belgium) is preserved by means of national and provincial parks of which the most important ones are contiguous and interconnected. 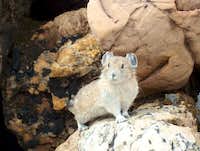 Other major provincial parks in the Canadian Rockies: 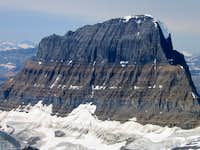 Emblematic Mount Alberta, first climbed by the Japanese expedition of 1925 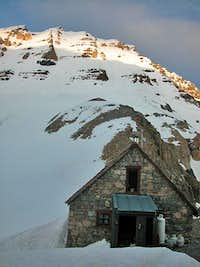 In the parks and recreation areas, there are many campgrounds and campsites both near highways and in the backcountry. Refer to the relevant park site (above) for details.

The most convenient airport to get to the Canadian Rockies is Calgary International Airport.

It is also possible to go to the Canadian Rockies by train with Via Rail, getting off in Jasper. Furthermore, Rocky Mountaineer provides 2 vacation train routes, from Vancouver to Banff / Calgary and from Vancouver to Jasper.

Most of the peaks of interest to climbers are in wilderness conservation areas where use of the backcountry is regulated. Refer to the relevant park site (above) for details. In the national parks there is an “entry fee” (in 2008: $9.80 / Adult / day, $19.60 / group / day) as well as a “backcountry use permit” for overnight / multi-day outings (in 2008: $9.80 / person / per night). Annual entry packages and seasonalbackcountry passes are also available.
If planning to stay overnight at one of the Alpine Club of Canada huts, it is possible to pay the backcountry use permit also to ACC while booking the hut. ACC will transfer the information to the park authorities and mention the permit on your receipt.

1. A few spelling errors! No big deal but worth correcting. 2. You're missing Waterton Lakes National Park in southern Alberta. 3. Geologically and physiographically speaking, the Canadian Rockies include Glacier National Park, Montana, which isn't clear from this article. 4. Another park has been added to the southern Canadian Rockies: Castle Provincial Park/Wildland Provincial Park. It's a very beautiful area and quite popular for hiking, but is a subject of much political conflict. See https://albertaparks.ca/parks/south/castle-pp/information-facilities/. A great hiking blog (not mine) with lots of information about the Castle is Dave McMurray's peaksandstreams.com. A few other parks worth mentioning is BC's Northern Rockies Provincial Park, the largest such park in the Rockies (http://www.env.gov.bc.ca/bcparks/explore/parkpgs/n_rocky/), Stone Mountain PP in northern BC (http://www.env.gov.bc.ca/bcparks/explore/parkpgs/stone_mt/), Alberta's side of the Kakwa (https://albertaparks.ca/parks/northwest/kakwa-wpp/information-facilities/) and Rock Lake-Solomon Creek WPP (https://albertaparks.ca/parks/central/rock-lake-solomon-creek-wpp/information-facilities/) 5. The Kananaskis Country link is out of date and should be https://albertaparks.ca/parks/kananaskis/kananaskis-country/ 6. This isn't really a correction, but shouldn't the 3500 m list be a list of the fabled 11000ers? Otherwise this is a really great page.