The Kinsman Ridge Trail is the standard hiking trail on Cannon. It starts from the hiker parking lot at the Tramway (easternmost parking area) and ascends 2300' in about two miles. Follow signs for the Tramway from I-93. 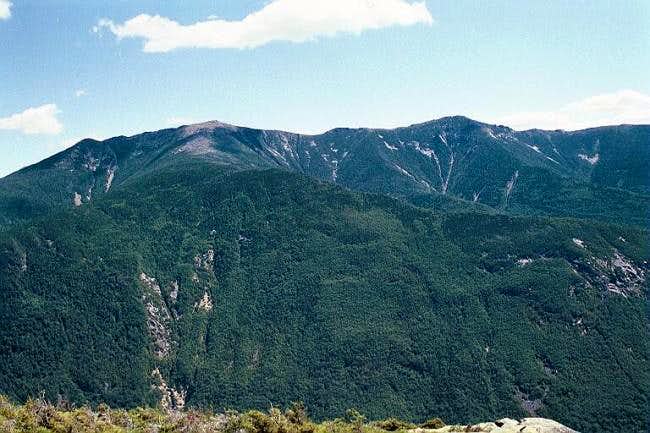 Start from the hiker parking area at the Cannon Mountain Tramway (it's the lot farthest to the south/east). A sign marks the trail to the summit. Follow the trail as it winds steeply through beach and ash forest gradually giving way to spruce and hemlock at higher elevations. The route largely parallels the path of the aerial tramway and you may be surprised every now and then to see it flying overhead. The people onboard will go to the same place as you, but you will enjoy the trip more and see views they won't.

At 1.5 miles, the trail bears left and emerges on the acres of bare rock ledges atop the Cannon cliffs. The views east of the higher Franconia Ridge are stunning. The ledges slope gradually down getting steeper and steeper the farther you go. Careful! This is where many of the classic, technical climbs on the cliffs top out. Near here is where the Old Man of the Mountain used to perch before its sudden, but not unexpected, demise in 2003. It was and is the symbol of the entire state and you'll see it on everything from coinage to road signs.

From the ledges on the false summit, continue south-west and ascend rough, rocky trail to the actual summit. All the people who passed you earlier will now be descending towards you huffing and puffing, unused to the exertion. The tramway building features restrooms, a cafeteria, and various historical bits. The actual summit is marked by a wooden observation tower, but the views are not nearly as interesting as those from the ledges.

Descend via the trail you came up or continue south.

Nothing particular. The trail is rocky and rough and you'll need sturdy boots. Bring a lunch, plenty of water, sunscreen, and bug repellant. The weather in the Whites can change suddenly by large amounts. Bring an extra layer of clothing and rain gear. Oh, and a camera is nice!