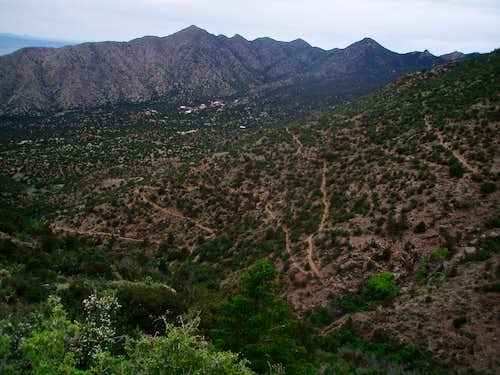 Lower and easy switchbacks of the La Luz Trail

The La Luz Trail climbs 3,700 feet from the base of the Sandia Mountains to the crest at 10,300 feet.
From the summit, hikers can return via the same trail or opt to enjoy a relaxing 15 min descent back to the base by riding the tram. As another alternative, hikers can take the tram to the top of the mountain and walk back down to the base. One way tram ticket for hikers can be purchased at either terminal.

The Trailhead for La Luz Trail is located at the Juan Tabo Picnic Area. Those interested in taking the tram should begin at the Sandia Peak Tramway parking area and take the Tramway Trail to connect with La Luz Trail 2 miles above its bottom terminus.

This is a popular trail, crowded on weekends with hikers, climbers, and trail runners. The trail has a long history of rerouting and there are many places where old trails may confuse some. The current trail is well worn its entire length. Please stay on the main trail.

"I wondered one time how an older man could always appear ahead of me. I would pass him, and find out that somehow he got ahead of me. He was taking parts of the Old La Luz Trail, which is shorter. Later, I learned the shortcuts, and played the trick on my fellow hikers/runners by staying behind and then appearing in front of them. Mean me..."

I ran La Luz Trail race several times. Once I carried a camera with me during the race, and took many photos, which I happened to loose. I remember sending those photos to the previous owner of this page, who deleted all information including those photos. Just imagine - busy August morning, and the trail filled with a line of runners It is so hard to pass during this run, so to get a good position at the start is important. I loved the echoing sounds when runners entered the switchbacks, the music and beer station at the “Y”, the grueling stairs just below the crest, and the best was the finish....I miss La Luz Trail run.

Distance: 9 miles (if starting from lower Sandia Tram), otherwise 8 miles from La Luz parking lot (one way)
Difficulty: strenuous (books describe as such)
Elevation gain: 3,900 feet
Best Time of the year: May to November (it does get hot on the lower sections in the summer, so start early)
Water: at tramway terminals (+ beer at the restaurant on the top of the Sandia Crest).

The trail changes dramatically as you ascend the altitude. It starts in the Upper Sonoran Zone (which goes up to 7,000 feet), where juniper and pinon trees, prickly pear cactus and cholla cactus are found. The transition zone is between 7,000 to 8,000 feet elevation, here the scrub forest is replaced with ponderosa pines, blue spruce trees, and assorted wildflowers in the summer months. The Canadian Zone starts at 8,000 to 10,000, it is located in the rocky switchbacks, it features aspens and pines. 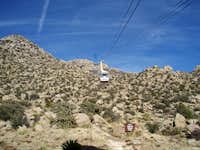 From Albuquerque, take I-25 north to the Tramway Road exit 234, NM 556. The road is paved all the way to both trailheads (normal 2WD vehicles are fine).

Description for the start at the Lower Tramway Station: Head east on NM 556 for 6 miles, then turn left to stay on Tramway Road. One mile from the turn, enter the Sandia Peak Tramway grounds. After paying the nominal parking fee, park near the base of the tramway. You should start here if you plan to take Sandia Tram one way (most people ascend the trail and take the tram down, but you can reverse it if you wish).

Description for the start at La Luz Trailhead: From Interstate 25, take exit 234, NM 556 to the east. After about 5 miles go left (north) onto FS 333 Road. Follow signs as the road climbs 2.3 miles to the La Luz Trailhead. There is a self pay station at the parking lot. The fee is 3$. This trailhead is better if you plan to hike up and down the trail, or for trail runners who come here to train for the La Luz race.

La Luz in the spring 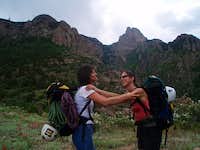 Climbers on their way to climb Pulpit

Option 1 - Lower Tramway parking lot via Tramway Trail to La Luz trail, top of the Sandia Crest, and down via the Tram - dogs not allowed - Begin hiking at the northwest corner of the parking lot at the information kiosk and sign for the Tramway Trail. Head into the granite boulder wonderland, immediately entering the Sandia Wilderness. The trail skirts the foot of the mountains, passing near homes and private property. In 1 mile pass the La Cueva Trail to the left and cross La Cueva Canyon. Climb a narrow ridge directly above some large homes, then cross the ridge and bear right, dropping into another canyon. Here the many switchbacks of the La Luz Trail are visible across the canyon, intersect the La Luz Trail and turn right.

Begin the long journey through switchbacks, where trail builders went overboard to ease the grades of the next 800 foot climb. The trail now skirts the north side of a deep canyon on a shadeless slope before reaching a tunnel of vegetation in the canyon bottom. Climb the south wall of that canyon to an open saddle, then continue the ascent on the north slope of La Cueva Canyon. Several broad switchbacks through oak scrub lead to a saddle over a small spur ridge. Drop from the saddle into the conifer forest of upper La Cueva Canyon.

Cross the bottom of La Cueva Canyon at about mile 5, where a sign warns against farther travel in winter. At this point the trail has gained 2,600 feet, with 1,300 feet to go. This area is called the Overlook. It is a good place to take a break and enjoy the views. Take a deep breath and begin the steepest section of the trail. The route is a long set of switchbacks that cross a talus chute about 16x? Views of La Cueva Canyon is impressive. One more set of broad meanders leads to a saddle and trail junction. The trail left goes to Sandia Crest (this is the La Luz Race Trail also). The trail to the right travels along the base of a banded limestone cliff. This spectacular section of trail is perched on a wide ledge with nearby views of massive towers of granite. South Sandia Peak dominates the view in the distance.

At mile 8.9, reach the junction with the Crest Trail, which is usually crowded with tourists. To reach the upper tramway terminal, bear right across a wooden deck at the restaurant.

Option 2 - La Luz Trailhead, via La Luz Trail, top of the Crest and back down the same way (this option follows the running race, and is slightly shorter, also dog friendly) Basically, most of the route is the same. The start is at the La Luz Trailhead, a well marked trail points you towards the intersection with the Tramway Trail. It is 1 mile to reach this intersection. Then you follow the same route until you reach the "Y" intersection high up above the switchbacks. The trail splits here with the left fork going to the top of the Crest (some stairs to be climbed here!), and the right fork heading along the beautiful trail with amazing vistas towards the upper Tramway stop and the restaurant. The running race takes the left fork and the grueling stairs.

Comfortable shoes, water. Some people prefer hiking with trekking poles.
Plenty of water. Consider hat, sunscreen, money for the tramway ride back, or beer at the restaurant on the top of the Sandia Crest.

This run was honored as one of the 12 most grueling trail races in north america by Trail Runner Magazine.

La Luz Trail run is a nine mile trail race that starts in the foothills of the Sandia Mountains and finishes on the top of the Sandia Crest. The race actually starts on the Forest Service road because the trail is very narrow, and it makes passing pretty much impossible. The local runners know how important is to get a good position during the first couple of miles of the race on the road. Later, on the trail, you pretty much just follow and try to keep up with the pace. The race goes only uphill, most runners jog after the race back down, or you can have friends/family to drive you around the Sandia Mountains. The drive will take about 1 hr.

The race entry is limited to 400 runners. The registration is via lottery. The 400 limit is mandated by the US Forest Service. The first La Luz Trail run began in 1965.

Might be good to attach this page to http://www.summitpost.org/sandia-peak/151423 also? Cheers.

I just want to share a trip report I wrote describing my hike on the La Luz Trail. I included a bunch of pictures and maps. Here is the link: https://backpackersreview.wordpress.com/trip-reports/la-luz-trail/

During the two-plus weeks of the Albuquerque Int'l Balloon Fiesta, most of the area is a total mob scene. MOB. SCENE. La Luz isn't going to be as crowded as the trails at the top of the Crest, but still, a lot more traffic than normal. And forget about the cable car or restaurant. Yikes! I learned this last year; don't repeat my mistake. :(

Re: Avoid during mid-October!

Thanks for the warning! I will be in ABQ for the balloon fiesta this weekend, and was girding for crowds... but this does temper my expectations.