The Sandia Mountains run in a North-South line for 17 miles on the eastern edge of Albuquerque, NM. This mountain range continues to the south and is known as the Manzano Mountains in that region. The two ranges are connected by Manzanito Mountains, a smaller subrange of the Manzanos, and divided by interstate 40. The Spanish word "Sandia" means Watermelon and refers to the pinkish color the mountains take on during sunsets. While the western Sandia Mountains are extremely rugged and desert-like the eastern Sandia Mountains are gentle and sloping, covered with a blanket of trees. Northwest of Sandia Peak is a small area called the Rincon Spur that connect to the Sandias. This area is also rather rugged although many houses have been built in the valley between these mountain ridges. The Sandias are a popular destination for both locals and tourists due to the plethora of activites. Some of the more popular areas are the Tramway, the La Luz Trail, and in the winter, the ski area and Capulin SnowPlay area. The Sandia Mountains are divided into three "political" boundaries: Sandia Mountain Wilderness, Cibola National Forest, and Sandia Foothills Open Space. In many places these boundries overlap. For more information on rules and regulations for each of these areas read the "Red Tape" section on this page.

Geology
The Sandia Mountains create the eastern edge of the Rio Grande Rift. The mountains were uplifted about 10 million years ago during the formation of the Rift. The mountains consist mostly of granite except for a thin layer of limestone topping the Crest. This uplift created the towering rock walls and spires on the rugged western side of the mountains. 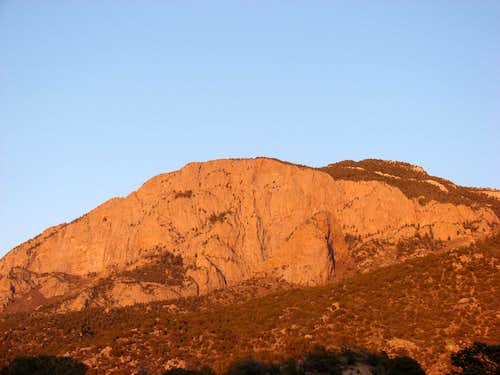 Sandia Peak is the tallest peak in the Sandia Mountains standing at 10,678ft. It
dominates Albuquerque's eastern skyline. At night you can pick out the summit area
from the red lights on the radio towers. The famous La Luz trail or route 536 will take
you to the summit. The Aerial Tramway will take you to the top of the crest not far
from the summit. 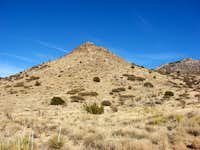 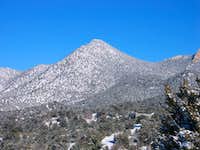 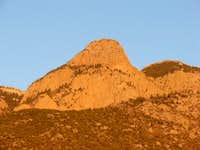 Western Sandias
From the center of Albuquerque travel east on I-40 to exit 167 (Tramway Blvd). From the exit ramp turn left (north) and go under the highway continuing on north Tramway.

Eastern Sandias
From the center of Albuquerque travel east on I-40 to exit 175 (Tijeras). From the exit ramp turn left (north) and go under the highway continuing north on Rt 14. Follow Rt 14 north for approximately 6 miles and turn left (west) onto Rt 536. There are numerous signs and the turn is just across from the Shell Gas station.

Southern Sandias
From the center of Albuquerque travel east on I-40. Take exit 170 or 175 depending on whether you are going to Three Gun Springs or Canyon Estates.

There is a great deal of opportunities in the Sandia Mountains for rock climbing. Traditional climbing can be found all over the mountain range but there are also some chances for sport climbing and bouldering. 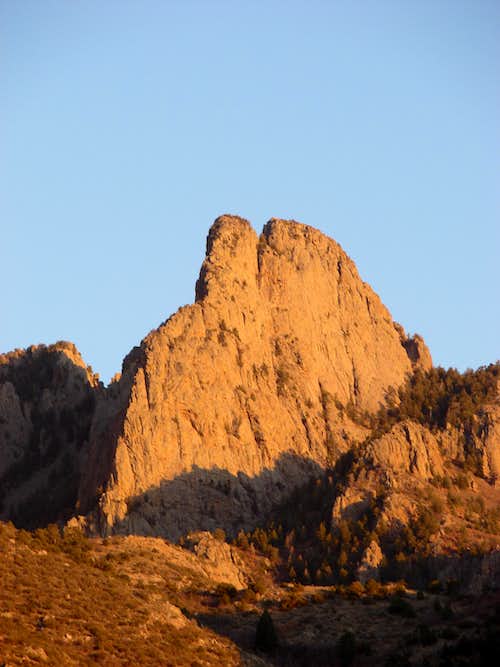 The Thumb is a popular climbing destination 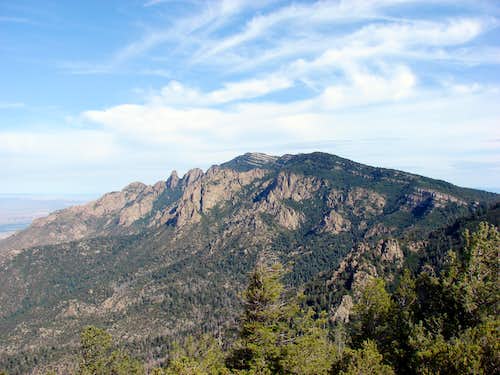 Bouldering
There are opportunities for bouldering just about anywhere in the Sandia Mountains. One popular bouldering spot with many established problems is the U-Mound bouldering area. Check out this site for U-Mound Bouldering.

Sport Climbing
There are not many sport climbing areas near Albuquerque but two can be found in the Sandia Mountains: Palomas Peak and Three Gun Springs. Palomas Peak is on the eastern side of the mountains with a 1.3 mile approach on a good climbers trail. With almost 100 routes the climbs range from 5.7 to 5.14. Three Gun Springs also has a few routes and some bouldering. To get there hike up the Three Gun Springs trail for 1 mile and turn right (east) at 35.08997N, 106.44185W. Bushwhack through the undergrowth for about 0.3 miles to the large boulders. Some routes have the bolt hangers missing but still have bolts in the rock.

Sandia Trad Climbing Areas Note: This table does not include all areas and routes in the Sandia Mountains. Number of routes are approximate.

The Sandia foothills don't see a lot of snow but the higher elevations do get a significant amount of snow that generally lasts all winter. The east mountains offer downhill skiing, cross-country skiing, snowshoeing, and the Capulin Snowplay Area.

Capulin Snowplay Area
The Capulin Snowplay Area is a very popular destination in the winter for sledding. Sleds with wood or metal are not allowed in the area. The opening and closure dates for this area vary so check the Cibola National Forest - Sandia Ranger District webpage before going. This is a fee area.

The Sandia Mountains offer much more; not only to hikers and climbers but to tourists and people just looking to enjoy the nice weather and beautiful mountains.

Aerial Tram
The world's longest tram offers stunning views of the rugged canyons and cliffs of the western Sandia Mountains. There are some nice short hikes and great views from the top of the tram. One-way tickets can be purchased if you decided to hike up then ride down. Be careful however, the Tram closes in high winds. Hours of operation and ticket prices can be found on the Tram's webpage.

Crest House
The Crest House sits on the summit of 10,678ft Sandia Peak. There are observation decks to take in the views as well as a small restaurant/snack shop and gift shop. There are also many short hikes that start from here. There is a large parking lot that can usually accomodate all the traffic but in the summer it my get full. This is a fee area.

High Finance Restaurant
The High Finance Restaurant sits at 10,378ft atop the Sandia Crest offering wonderful views of the the Sandia Mountains, the City of Albuquerque, and the plains and mountains beyond. The restaurant is located next to the tramway terminal and makes a good stop whether you have just ridden the tram up or need a beer after hiking the La Luz. The food is good and the lunch prices are reasonable. At night you can enjoy a fancy dinner and see the lights of the city. For more information, dinner menus, and reservation info visit the High Finance webpage.

Sandia Man Cave
Sandia Man Cave is located off of rt 156 on the eastern side of the Sandia Mountains. There is a short trail from the parking area to a staircase leading to the entrance of the cave. The cave was discovered in 1936 and archeological digs have uncovered human tools and clothing as well as mastadon remains. Dating estimates the cave being used over 10,000 years ago making it one of the earliest recorded human habitats in North America.

Birding
With four distinct life zones in the Sandia Mountains there is a large array of bird-life that may be encountered. There are many areas in the Sandias that offer good chances for birding.

The Calulin Bird Log is a hollowed out log fed by a spring. This high traffic bird area can be viewed from a slight bluff about 25 feet above the log.

The Hawk-Watch Trail beginning at the Three Gun Springs trailhead is another local area used for birding. Due to its lower elevation and south facing nature this is a nice warmer area to visit in the winter for both humans and birds.

The Rosy Finch project is an ongoing project to ensure the Rosy Finch will revisit Sandia Crest every year. Special feeders have been set up to encourage them to come back each year. To read more about the history of this project visit the Birding in the Sandia Mountains webpage.

Rules for the City of Albuquerque Open Space are listed on this webpage. These rules are typical rules for open space and wilderness areas. Mountain biking is allowed only in the Open Space area, not in any other areas of the Sandia Mountains.

Rules for the Sandia Mountain Wilderness can be found on this webpage. Be aware that portions off of the La Luz trail are closed seasonally during mating season for endangered birds.

Many areas of the Cibola National Forest require a pass or permit to use. This webpage contains information on permits and recreation fees. This table shows the fees for each individual area in the Sandia Mountains as well as what improvements are at each area.

Available camping in the Sandia

Visited Sandia Mountains Aug/Sep 2015 from California. When we first tried to put the trip together, we could not find any camping there. Everyone was telling us that most hikes and climbs get done in a day from Albuquerque and that overnight stay is severely limited by available water and no campgrounds in the Sandia. Since paying for hotel in a town quite far away did not suit us, we searched for ANY campground and found one, "Turquoise Trail Campground and RV Park in Cedar Crest http://www.turquoisetrailcampground.com/ The distance from the campground to Sandia Crest is 14 miles by car and to the furthest TH we used, Piedra Lisa Spring Trail about 35 minutes driving. This Campground works well for out of state visitors or those who want to spent several days camping very near the Sandia Mountains. We were very happy with the Campground's tent area and showers. Large grocery store is just minutes away, yet all of it in peaceful, rural setting. Recommended.