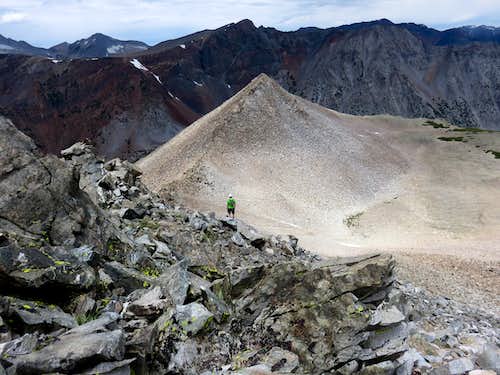 Dean standing along the route
Mount Warren and Warren Fin can be reached via Lundy Lake via a long, but straight-forward approach. This can be done as a 10.5 mile loop.
A trail heads up to Oneida Lake and then some boulder hopping is required the rest of the way. The hike is no harder than Class 2 at any point, and is mostly Class 1 boulder hopping. Some loose rocks can make things interesting. This is a long day due to the boulder hopping and lack of a good trail above Oneida Lake.

Approaching Mount Warren from Lundy Lake can typically be done starting in late June and through early October. Because this is the north side, snow is typically more prevalent in early summer in a normal year.

Lundy Lake is located off of US 395, 7 miles north of Lee Vining and 18 miles south of Bridgeport. Take the road to Lundy Lake and drive five miles up the road, there is a sign on the left points to Lundy Dam. It is a short gravel road that ends at the Lake Canyon Trailhead.

This hike is best done as a loop, although it can be done as an out and back. If doing a loop, it is best to take the trail to Oneida Lake on the way up. Descending back to Oneida Lake requires down climbing large boulders, which isn’t very pleasant. The standard descent route has a lot of scree, which makes it easier going down and tougher going up.

From the trailhead, take the trail as it climbs along the side of the mountain above Lundy Lake. Eventually the trail turns south into Lake Canyon on the way to Oneida Lake. The trail becomes a road for part of the way.

Once at Oneida Lake 9,663’, things get interesting. Essentially the goal is to get to an obvious saddle above the lake towards the left. You can either hike up to the left of Oneida Lake (which is what we did) or hike around the right side of Oneida Lake. Hiking along the right side of the lake is longer, but appears far superior because it is easy walking instead of boulder hopping. There is a slight use trail up to the saddle, but it is hard to follow, and once near the top of the saddle, the switchbacks are unnecessary since it is easy just going straight up. 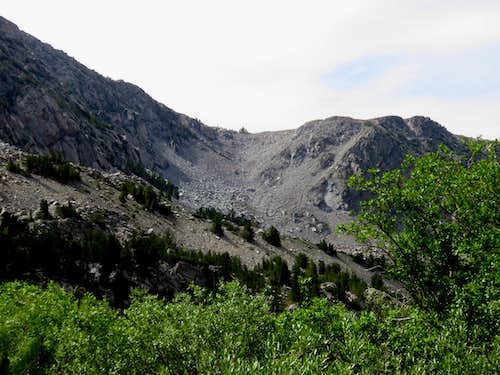 
Once at the saddle at approximately 10,590’, the route is straightforward. There are three climbs to manage before the final climb to Mount Warren. The first climb is up towards Point 11,363. Don’t climb all the way up. Get up high enough to see a saddle and go cross country to the saddle which is at 11,170’. The second climb is up towards Point 11,612. As with Point 11,363, you don’t have to go all the way up. Start along the left side of the first part of the climb, and then after about 300’, go to the right side of Point 11,612 towards the saddle. The third climb is up to Warren Fin. At 12,177’, Warren Fin is Mount Warren’s little brother. For this approach, Warren Fin must be reached first before reaching Mount Warren. 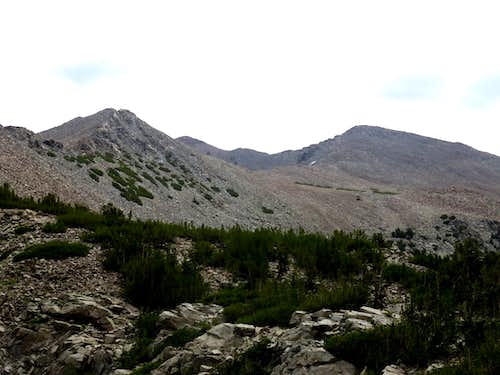 The route to Warren becomes clear 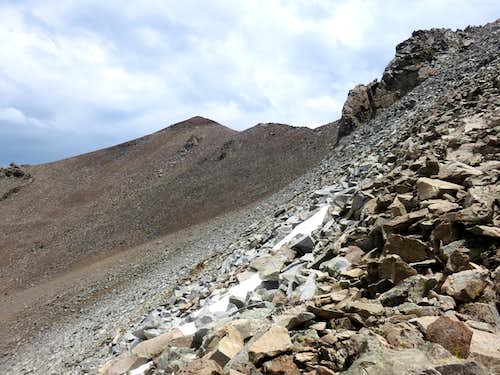 Warren from the ridge up to Warren Fin 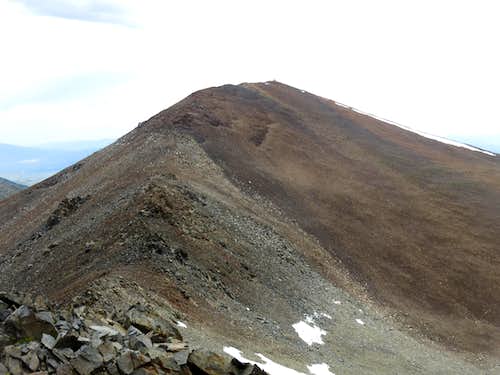 Warren Fin can be avoided if desired, although it really isn't worth it, because it barely saves any elevation gain, and requires more of a slog heading up the final slope to Mount Warren.

Warren Fin is reached in about 6 1/3rd miles, and Mount Warren is reached in about 6 ¾ miles; gaining over 4,700’.  A descent via this route is doable, but not recommended unless you want the extra mileage.
However, a quicker descent can be done via the northeast ridge of Mount Warren or the Deer Creek Canyon which is in between the northeast ridge on the right and the ridge that contains Gilcrest Peak on the left.  However, the Deer Creek Canyon is not recommended as it is very steep and brushy at the end.

Instead, for this descent head down to the lake north-northeast of Mount Warren about 1,300’ below the summit. 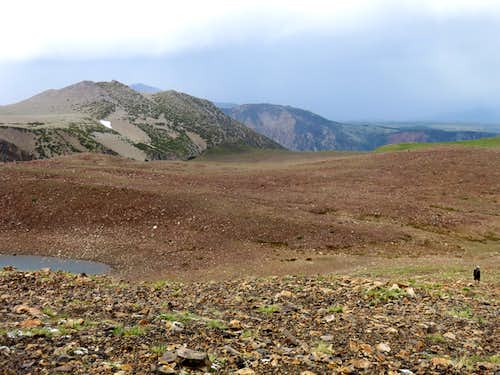 Descent route down the northeast ridge

Once at the lake, there are two options. The first is to stay on the ridgetop. This is easy walking for 2 ¼ miles. But the last 700’ to get off the ridge is a steep drop through brush heading off the ridge. The good part of this is you can see the trailhead on the final descent. Once at the bottom of the ridge, cross Deer Creek and head back to the trailhead a little over a quarter mile away.

Another option is to head down into the canyon (which we did). There are a couple pleasant scree slopes that drop you down into the forest. Then there is a little under a mile of easy walking through the forest. Stay on the right side of the forest to avoid Deer Creek. At about 8,900’ you reach a steep drop off into the creek and thick brush. It isn’t as steep as the drop off from the ridge, but the brush is thick and wet. Once through the brush, there is a road that leads directly back to the trailhead.

Both options are less than 4 miles back down to the trailhead.

There is no red tape.  The trailhead has a bathroom and space for maybe 15 cars.  There are no fees.