In the gorge
The gorge of Liechtenstein has not much to do with mountaineering, but it is a wonderful part of mountaineous world. Today, it is a tourist attraction and you are not allowed to do there anything else but walking to the end of the arranged path - and back. Let's leave aside the paroles that the gorge is one of the longest and highest in Europe. But its beauty certainly deserves some advertising. So, visit highly recommended.

Liechtenstein Gorge is situated at the mouth of long Grossarltal, near St. Johann town. As the highway Salzburg-Villach passes close by, the access is quick and simple. Just exit either at Bischofshofen or Flachau, drive into St. Johann, then follow signposts which bring you to the gorge entry in a few minutes of drive.

Grossarltal is the valley which goes from the main Salzach valley towards the
south, ending below the main crest of Hohe Tauern. It is considered to be the western border of Radstaedter Tauren, the group which is geologically in this area quite different than Hohe Tauern.

The Origin and Nature of Gorge 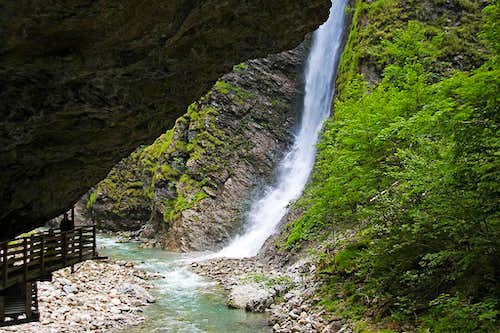 The creek
Over many thousands of years, the Arlbach (creek), rushing down from up to 3000 m high mountains, has carved a very deep (up to 300 m) and narrow gorge. When walking through it, you will come on places, where the sky can hardly be seen above you - or only as a tiny, narrow cut. But if coming at a proper time - around noon - light in many places creates great effects in the gorge. The lively creek flows rapidly in this section, forming also many cascades. In addition, when you reach the end of the arranged path, there is a nice waterfall, formed by a side creek. That's really a nice place. And finally, unlike some other gorges, the Liechtenstein Gorge excell with nice rocks, revealed by water. Rock layers, strata and other characteristics really add much to the overall impression.

The first attempts to arrange the gorge for visits was made in 1875. But the enterpreneous local people were not having enough funds to complete the task. So, it was the Prince of Liechtenstein, whose generous donations enabled to build the necessary bridges through the most beautiful part of the gorge. Since then, the gorge is called by him. Until today, more than 10 million people have visited the famous chasm.

The start of the gorge 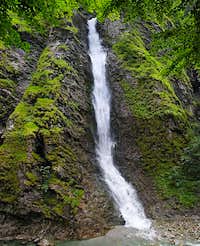 The side waterfall
For the visit you count one good hour. It's a short not at all difficult walk, 1 km in length, but you will probably not rush on it. Except on a few easier parts, the path goes mostly by bridges, hanging on the walls and crossing the stream, and also it goes by artificially cut ledges, steps and tunnels. The path is easy, suitable for everybody, ideal for family outings. However some parts of the path do not allow that also tourists on wheel chais would visit the gorge. There is no possibility to do a round tour - you must return by the approach route.

After entering the gorge you go along the creek, then the walls soon narrow and you pass a very picturesque part of the gorge. Then you reach the dark part, where the path enters almost underground. Information plates remind you on a few interesting features, then you do parts of a gorge even through tunnels. On the upper part you exit the wildest part and there a very scenic place awaits you. From the other side of the gorge a side waterfall rushes into the main stream. There the part, arranged for visitors. Ends.

In 2014 the gorge is opened from May 1st till September 30th, daily from 8:00 till 18:00 (last admission). In October the hours are 9:00 till 16:00. In times of severe weather conditions and floodings the gorge may be temporarily closed.

Admission fees for adults are 4.5 EUR, for groups and other ages there are discounts.