The Manzano Mountains are a 40-mile long continuation of the same fault block of granite tipped with fossil-laden limestone as the Sandia Mountains. Named for the apple trees found near the village of Manzano in the early 1800s, the area was inhabited by several different groups of Pueblo Indians including the Isleta Pueblo until the late 1870s. Perched on the edge of the Rio Grande Rift on the west and the Estancia Basin (aka Salinas Valley) to the east, these mountains are seldom visited despite their proximity to Albuquerque. The Manzanos are bordered on the north by the military withdrawal of Kirtland Air Force Base, and the Isleta Pueblo Indian Reservation. Within the Manzano Mountains is the Manzano Mountains Wilderness comprised of nearly 37,000 acres and 64 miles of trails, including the 22-mile long Crest Trail. Elevations range from 6,000 feet to over 10,000 at the summit of Manzano Peak. 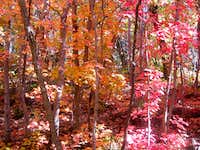 The rich red of Bigtooth Maples.
The mountains are most famous for the Fourth of July Campground and Canyon where the large stands of Bigtooth Maple change color to brilliant oranges and reds during the fall.

The major peaks in these mountains include Manzano Peak (10,098 ft.), Gallo Peak (10,003 ft.), Bosque Peak (9,610 ft.), Mosca Peak (9,509 ft.), Guadalupe Peak (9,450 ft.), Capilla Peak (9,375 ft.), and Osha Peak (9,313 ft). Manzano, Gallo, Bosque, Mosca, and Osha are the most frequently ascended as Guadalupe Peak is on Isleta Pueblo land and closed to the public. Capilla Peak is also rarely ascended because of the Capilla Peak Observatory located at the summit. This observatory boasts a 24 inch optical telescope owned by the Institute of Astrophysics at the University of New Mexico, and is used primarily for research. Major canyons in the area include Fourth of July Canyon (via Fourth of July Campground), Trigo Canyon (via JFK Campground), Comanche Canyon (via JFK Campground), Red Canyon (via Red Canyon Campground), and the trail-less Ojito Canyon southwest of Mosca Peak.

Looking south to the heart of the Manzanos from Mosca Peak.

In the eastern foothills of the Manzano Mountains are the Manzano Mountains State Park and the Salinas Pueblo National Monument Quarai and Abo units. The State Park is a great place for hiking, fishing, bird watching, and photography. The National Monument units house the remains of four historic mission churches and is a great place to learn the history of the area. 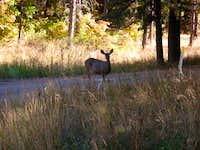 Mule Deer at Fourth of July Campground.
The Manzanos are home to plant species such as Bigtooth Maples, Aspen, Ponderosa Pine, Alligator Juniper, and Gambel's Oak. Fauna in the region includes Black Bear, Mule Deer, Mountain Lion, Desert Bighorn Sheep, and Abert's Squirrels. Like the Sandias to the north, the Manzanos are an important raptor migration flyway. The non-profit organization HawkWatch International monitors and counts the various raptors who make their way through this area. They have trails and monitoring sites in both the Sandias (access via Three Gun Springs) and the Manzanos (access via Capilla Peak).

The last three years have been difficult for these lightly-visited mountains. Four separate fires have scorched many acres of this pristine wilderness area. In October of 2007, a small 120 acre blaze called the Agua Fire started east of Capilla Peak. In November of 2007, the lightening-caused Ojo Fire burned nearly 7,000 acres. The most devastating fire, believed to be caused by some hunters, started in April of 2008, was dubbed the Trigo Fire, and burned 13,709 acres. This fire scorched the mountains from Trigo Canyon on the west-side, and nearly reached the towns of Manzano and Torreon on the east-side. This burn was followed by the Big Spring Fire in June of 2008 which torched 5,478 acres. Despite the burned areas, the mountains are still very beautiful and worth exploring. Many of the underbrush is growing back, and the burned areas are great places to view wildlife such as Mule Deer and Black Bear, and bird species such as Hairy Woodpecker. 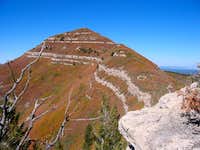 Mosca Peak from the Sub-Summit
The Manzanita Mountains are the low-elevation bridge between the Sandias to the north and the Manzanos to the south. Although there are no grand summits within the Manzanitas, they are connected to the Manzanos and are popular for mountain-biking, climbing, and birding. Some of the more popular mountain biking trails include Otero Canyon and Tunnel Canyon (which can also be combined into an outstanding loop), and the Coyote-Chamisoso loop. A map of the hiking and biking trails can be found HERE. The limestone bouldering and top-roping for beginners is at Ranger Wall situated near the Sandia Ranger Station, and good bouldering, top-roping, and sport routes ranging from 5.7-5.12a can be found at Big Block just a few miles south of Otero Canyon. The two important bird areas, Otero Canyon and Cedro Canyon, are home to the much sought-after Black-throated Gray Warbler and the Gray Flycatcher. Radio-tower covered Cedro Peak (7,757 ft.) is the highpoint of the area.

This mountain range is pretty large, and there are lots of access points. Below are listed a few. To get to the east-side (and the most popular destinations) from Albuquerque requires a long drive from the north through the town of Tijeras.
West Approach 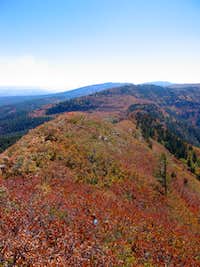 The South Ridge of Mosca Peak
(For Trigo Canyon, and JFK Campground)

From Albuquerque, drive south on I-25 to Belen. Take exit 191 east into Belen. Follow Camino del Llano to S. Main St. and take a left. Take a right onto E. Reinkin Ave (NM 309). Follow NM 309 across the Rio Grande. Take a right just past the river onto NM 47 (Rio Communities Blvd). Head south on NM 47 almost 2 miles to North Navajo Road. Turn left and follow this 8 1/2 miles to the mountains. Turn left onto Trigo Springs Road and go just over 3 miles. Turn right onto Trigo Springs Rd. and follow it to the campground.

Approach from the north and east (For 4th of July Campground)

Head east on I-40 to the Tijeras exit and head south on NM 337. In about 35 miles, you will get to a T intersection with NM 55. Take a right. Continuing on NM 55, you can access Fourth of July Campground from Tajique, FR 55 from Torreon, FR 245 and 253 from Manzano, and FR 275 near the Salinas National Monument Quarai Unit.

Head east on I-40 to the Tijeras exit and head south on NM 337. The Sandia Ranger Station is on the east side in about 1/2 mile. Hang a left immediately after the Station to park for Ranger Wall which is a tenth of a mile hike directly south. Tunnel Canyon and Otero canyon are several miles south on 337 and are clearly marked on the west side of the road. Big Block is located just under 1 mile past Otero Canyon (and exactly 4.5 miles from I-40) on the west side of the road. There is a big black cliff with a large black boulder (the Big Block) in the Cedro Creek stream bottom, as well as a large road cut. Park by the rock wall, and walk around to the south to find the trail that leads to the creek bottom and the cliff.

Looking north from Mosca Peak to Guadalupe Peak. The Sandias are in the distance.

There is no red tape in the Manzano Mountains, although road closures are frequent in the area in winter. Check with the Mountainair Ranger District of the Cibola National Forest at 505-847-2990 before you plan your trip.

For the Manzanitas, the land is primarily owned by the Cibola National Forest and Albuquerque Open Space. There is also much privately owned land, so buy a map and please do not trespass.

The campgrounds in the Manzano Mountains are Capilla, New Canyon, Red Canyon, Tajique, and Fourth of July. Click here for detailed information for the above campgrounds.

The only camping in the Manzanitas can be found at the Cedro Peak Group Campground.

The best map to get is the Manzano Mountains Wilderness map available locally in Albuquerque at REI near the intersection of Montaño and I-25. It costs about $14.95 and is plasticized for weatherproofing. You can get it for $7 if you go directly to the Cibola National Forest Office off of Osuna. To get there from I-25 head west on Osuna. Take a right onto Chappell Drive. The office will be on the west side of the street in about 1/4 mile.

The best and only map (not including USGS) for the Manzanitas is The Trails of Cedro Peak and Otero Canyon available locally at REI and bookstores for $7.

Hans, I've added a SP page for Big Block and added it to your Manzano page. I think it's a bit more comprehensive than the rockclimbing.com page for the area. Happy Hiking!

Thanks! That's Great! I will change the link!