On the "Back Side" of Enchanted Rock are some tall, slabby walls home to a few pure trad routes and a few mixed routes but many more bolted routes. Many of these routes are infamous among Central Texas climbers for their long run-out sections (often 30' or more between bolts, and sometimes no protection at all on a pitch).
Mark of the Beast, first climbed by legendary Texas climber James Crump, is, at three pitches and around 250', one of the longest climbs at Enchanted Rock (it can actually be more than 300' if you extend the last pitch to the top of the dome and build an anchor up there). That, the fact that it is well-bolted for an Enchanted Rock route, and the fact that most Texas climbers are sport, not trad, climbers, make it a popular climb.

Set out on the Summit Trail and then take the Echo Canyon Trail. When that trail reaches a board with lots of information posted, head right on a good trail that follows the Backside and has several spur trails to various walls. Look for the Yellow Trail and take it to the base of the dome. Devil's Slide is to the left. Easier Than It Looks starts up a slab next to a massive boulder leaning against the slab. Harder Than It Looks starts just a few yards right of ETIL, and Mark of the Beast starts to the right of HTIL. With the picture below, you should have no trouble finding the routes. 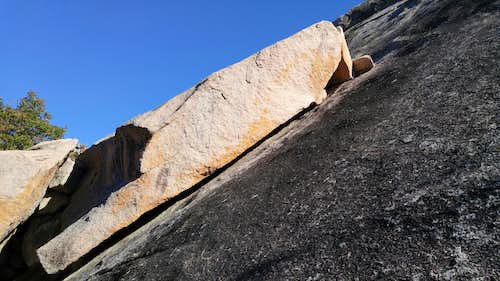 The photo below, linked from Mountain Project, is an excellent representation of the routes in this area of the dome, though there are a few minor errors.

P1-- 140', 5.6, 7 bolts. Also called Christine's Variation, this pitch is a lot of fun and great for a new leader. Some do just this pitch. The bolts on this pitch can be hard to see. Above a ledge at the end of the pitch are two bolts for anchors.
P2-- App. 50', 5.8/5.9, 3 bolts. This is the crux pitch, and it earns the route its 5.8+ rating. Step left and climb thin crimps and feet to the first bolt. This is a committing move, and even more so because a fall before the clip, and you cannot make the clip before making the move, will be a FF2. The times I have led this pitch, I have started by clipping the left anchor bolt in order to make a fall a little easier on the anchor and the belayer. Fortunately, I haven't fallen and had to test this. The spice is not over until a little after the second bolt, which is pretty close to the first but does require some stout moves to reach. Many people think the start deserves a 5.9 rating. Shortly after the second clip, the angle lessens and the climbing gets much easier. There is a third bolt to clip, and then there are two bolts for anchors.
P3-- 100' or more, 5.easy. The actual pitch, as opposed to the diagram in the previous section and what many do, goes up a completely unprotected but easy shallow black "trough" until the climbing becomes walking. Contrary to what you might read published elsewhere, there are not anchor bolts atop this pitch, and you will have to build a gear anchor unless you have enough rope to reach some sketchy trees and rocks. Using two Tricams and a stopper, I made an anchor using a horizontal flake; a set of cams would have worked as well. Alternatively, and this is what many do, you can from the P2 anchors traverse up and right (easy but exposed) to a bolt and clip it. Then climb straight up a 5.5ish slab past two more bolts to two anchor bolts. Those bolts and anchors are part of a different route, but many use them to finish MOTB nonetheless.
To descend, there are some options:

At least seven draws, gear for bolt anchors, possibly gear for a trad anchor. If you plan to walk off the top, a 50m rope will work, but if you plan to rappel the route, you will need doubles in 50 or longer, or a 60 to use the News Wall anchors.