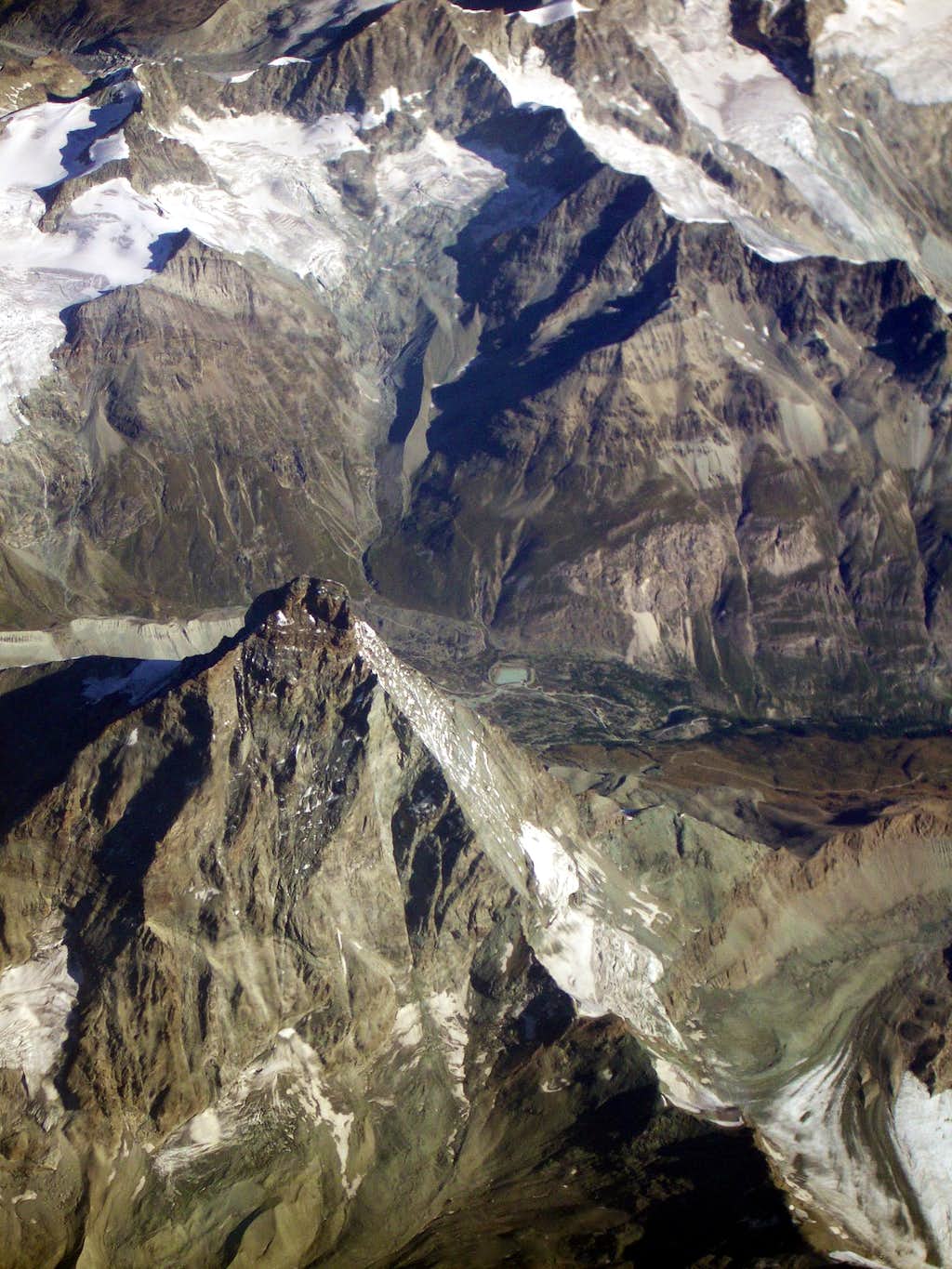 Matterhorn/Cervino (4478m) from my office looking North into Switzerland from above Cervina, Italy. The start of the southern end of the beautiful Val de Zinal, that is the upper reach of the Val d'Anniviers is just visible in the top left. Part of the South face of Ober Gabelhorn (4063m) can be seen at the top of the picture. The Hörnli Ridge leads off in the three o'clock position towards Zermatt. The Furggengrat ridge in the five o'clock position is the Swiss/Italian border reaching out to the Monta Rosa group. The eight o'clock ridge is the Arrête du Lion that continues the border as it leads towards the Dent d'Herens (4171m). Dent Blanche (4357m) is out of the picture in the ten o'clock position but Pte de Zinal (3789m) can be seen top left. The picture was taken on the 9th September 2004 after a dry spell, compare it to the picture taken on the 23rd of August 2005 after a storm. This picture shows the view as approaching the Matterhorn while heading East towards Mona Rosa.
« PREV NEXT »

I would like to work in your office...:)
When did you take it?
TA

I take it that your office is a corporate jet or something similar I once photographed the Matterhorn from a commercial jet flying from Rome to Paris (see my photos). How did you get the directly overhead angle? Did you bank the plane?

Re: Airbus with glass floor?

There was also a bit of luck to taking this picture! I have tried many times before!

Looking at your picture we were also a lot closer to over head the Matterhorn that makes the angle look different.

From what I remember we did not bank the plane, and if we did then no more than a very gentle left turn.

Thanks! It took many years for me to be lucky enough to be in the right place at the right time, just to go schnapp!

Thanks for the comments. I've been flying for a couple of decades but this is probably my best picture of the Matterhorn and it was more down to luck than skill!

I don´t know what it´s best: your picture or your comment. Well at least here you have my vote

Thanks for your picture, great shoot.

Thanks. It makes a change from the usual view.

I've never seen it from this angle. Certainly much better than the view I have from my office :-(

Glad you liked it! I find it's always good to see a different perspective once in a while.

was it your lunch time?:)))
fantastic shot!

Thanks for your kind words. Well I wish we could have gone into a holding pattern but places to go.... I can't remember the lunch but I can remember the view!