Middle Sister coughed up a different experience for us this weekend than it likely would have had we planned this trip two weeks earlier or two weeks later- between the high temperatures and the utter lack of recent snowfall, the hike in was brutally hot and the snowline was raising itself by the day. The trail in, however, is very apparent and aside from having to search for the climber’s trail, getting to the Hayden Glacier from the Pole Creek Trailhead is very straightforward.
We decided to camp higher up than the few other parties we saw, partially due to having left the ground cloth at home to save space/weight in our packs, partially due to wanting to camp away from other humans (who could be loud and obnoxious), and partially due to feeling a little lazy about the next morning’s wake up call and wanting to have to climb the shortest distance we could arrange.  We pitched the tent, organized our gear for the next day, and ate dinner.  Before going to sleep, we set up our harnesses and rope and practiced roped, glacier-travel for a few minutes.  This was the first peak we brought the rope on that did not include any actual Alpine Climbing because after reading multiple trip reports and seeing photos of the crevasses that open on the Hayden Glacier later in the season, we took this trip as an opportunity to practice our crevasse rescue protocols.  We were unsure of how avoidable the crevasses would be (if they had formed yet) and decided to be prepared for the worst case scenario (aka, unavoidable, massive, gaping crevasses). 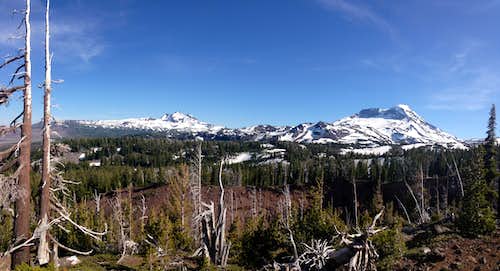 Our strategy on Sunday morning was to awake at 3:30am for a 4:00am departure time, to eat breakfast quickly and gear up.  Andy traveled in front so we were able to use Gravity to our advantage should we encounter, and fall into, a hidden crevasse. The morning was beautiful and the snow, despite still being relatively soft, was in good climbing condition.

We were also the first ones up and made good time up to the glacier where we saw, forming in incredible patterns, crevasses.  The lack of snowpack coupled with the well-above-freezing temperatures had stitched many of them across the landscape but we were able to easily avoid them by sticking to the still-prominent ridge line that led up to the col between North Sister and Middle Sister.  Who knows what the glacier will look like later in the season so anyone planning on climbing Middle later in the year should be intentional about checking conditions and reading recent trip reports.

By the time we hit the col, the sun was fully up.  We packed away the rope and our harnesses and headed up an intermittently steep section of mixed terrain- snow, ice, and melting-out rock which, at its steepest points, was maybe 40-45* with relatively safe run out due to the melted out, rockier sections.  Even at 7am, the previous day’s steps were heavily melted out and we spent much of the climb that wasn’t on ice breaking through the crusty surface of the snow. After a quick inventory, we discovered that the summit was heavily corniced and we intentionally stayed as far back from the edge as we could manage.  Checking for cornices should become part of one’s natural landscape inventory whenever spending time in the mountains, especially late in the season when the snow is soft and melting out. 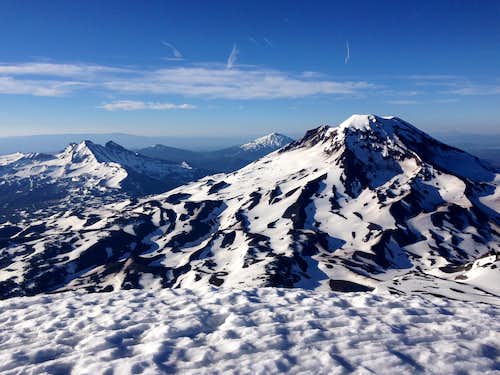 We reversed the route for the descent, being intentional about where we were descending to prevent rock and ice fall on the few parties coming up the ridge toward the summit.  This was a great, easy climb for anyone with mountaineering experience but preparedness for crevasses would be a wise choice, especially given the abnormal weather year we’ve had.

For additional photos and a GPS track, visit the Mountain Refugees blog.