My post here is from my blog at fearisbeautiful.com.  More details are on my site. 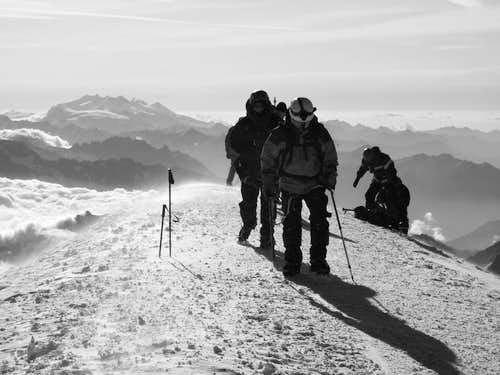 It is a pretty daunting moment, getting out of your tent at 1 am, by yourself, to climb an unfamiliar mountain in a foreign country.  It was helped by the fact that more than a hundred climbers and guides were walking past my tent in small groups on their own ascents.  I simply fell in behind the next party to pass, and joined the train of climbers.

Climbing Mont Blanc is the first solo mountain ascent I have ever done, and will almost certainly remain the best.  It’s the highest mountain in Western Europe at 4808 metres, rising over Chamonix in the three-way corner of the Alps where France meets Switzerland and Italy.

Camping in my small one-man tent outside the Refuge Tete Rousse meant that I only had a few hundred metres of uphill ascent on the snow before I reached a small snow couloir that was the most dangerous part of the climb.  It was strung with a wire that climbers could clip to for security as they crossed the gulley.  The wire wasn’t to stop them if they slipped, but to catch them if they were hit by one of the frequent rocks that rolled down the funnel like small bowling balls.  Rocks came down every couple of minutes during the day as the snow and ice loosened in the heat, but in the early morning they were rare and I could cross without any problems.

After the bowling alley of the gulley was the first of the two main stages of the climb.  It was a two hour long scramble up a long rocky section that lead to the second hut on the mountain, the Refuge de Gouter.  There was nothing to see at that hour of the morning except the rock directly in front of you.  If I fell more than a few metres behind the climbers in front of me, they would soon disappear behind turns in the steep rocks and I would pick my own way until I stumbled upon them again in an open section of the climb.  Despite more than a hundred climbers on the route, the feeling of isolation was palpable, and the chance of getting lost and off route was on my mind every step as I started already to question my decision to climb alone.

Despite the challenge of the rock section, before I knew it I reached the Refuge de Gouter without incident, still only thirty seconds behind the climbers I was following.  I sat outside the Refuge to eat a honey sandwich while a slow trickle of climbers walked past me.  My only food for breakfast, lunch and dinner that day was a loaf of bread I’d used to make honey sandwiches – food that my adventure racing friends swore by.

By this time in the morning, almost 4am, there was enough light to make out what I saw around me and the vague shape of the mountain.  The constant flow of other parties stopped me from resting too long, and I fell into line again behind a group of three roped climbers.

There is nothing technical about the section from the Refuge de Gouter to the summit.  It is a long walk through the snow, taking about four hours to the summit.  There are no especially steep sections, with the first main landmark being the Vallot Hut.  It is a small emergency hut, with a well-designed, well-constructed, but truly filthy toilet.  It was a squat, long-drop toilet, and clearly people had been missing the hole by and increasingly large margin for a long time.  Still, it was the only toilet I’d find for the next five hours, so I stood back a little and gave my best aim like so many before me.

Vallot Hut and its Disgusting WC

After the refuge there are several humps to cross, where I passed a lot of tiring groups, before reaching the small ridge to the summit.  As summit ridges go, it was still a fairly generous size, but as to be expected for the highest mountain on this part of the continent, the drop off on either side of the ridge went a very, very long way down through crevasses, bluffs and other death traps.

Not for the first time in my climbing career, I found myself regretting the decisions that had put me in that place at that time, and promising that if I got through it all alive, I would be happy to call an end to my alpine career.

But what rubbish! Fifteen minutes along the summit ridge and I found myself on the broad summit Mont Blanc and feeling about as happy as I’d ever felt about anything.  The view was unbelievable, the sharp peaks and ‘aiguilles’ of the Mont Blanc massif rising out of a sea of low cloud that obscured the lower valley’s and plains.  I couldn’t stop smiling, and shook hands with the other climbers coming up behind me, even though we had never spoken before.

My second real moment of panic for the climb came when I pulled out my camera to find that the low-battery light was blinking, exhausted by the sub-zero temperature.  I quickly took two photos, only to see another warning message telling me that the memory card was full!  The idea that I might have climbed all this way and not get any photos made me feel sick.  Despite the cold I broke out into a sweat, fumbling at the tiny controls with three layers of gloves on to quickly try and delete a dozen photos. Luckily I was able to get it done and take my series of selfies and summit photos without the battery dying.

The descent was not the nervous process that the climb had felt like.  I passed dozens of climbers who had either started late or just walked slower, with many looking exhausted and a handful looking genuinely sick.  I was grateful for my preparation.  I had been hiking for weeks through the Alps before tackling Mont Blanc and was fit and well acclimatised.  I stopped again at the Refuge de Gouter for more honey sandwiches and lollies, then descended the long rock section to the lower refuge.

Still on an emotional high, I packed my small tent and hiked the last forty minutes to the train station for the ride back to Chamonix.  The thrill of climbing a mountain beats any other thing I have ever done – surfing, rock-climbing, sky diving, scuba diving, nothing has the same feeling that you have worked hard to conquer a physical, mental and emotional challenge amongst the most majestic scenery the world has to offer.  The promise I made myself near the top to give up climbing if I survived was nothing more than a distant memory as I started to think through my next stops on my European climbing bucket list.

Check out SummitPost or UK Climbing.com for details on the route.

I stayed with Marie at the Gite La Tapia, and can’t recommend it highly enough.

For more of my photos, check out my shots on Flickr.