Mount Rolo is a high peak in the central Pasayten Wilderness located on the ridge between Wildcat Mountain and Osceola Peak. Flanked on the west by the Middle Fork Pasayten River and on the east by Eureka Creek, Rolo stands 3000 feet above these drainages, but it's prominence is less than 1000 feet due to the aforementioned higher neighboring Osceola Peak. The first ascent was made in either 1925 or 1926 by Roland Burgess and was later named after him by Lage Wernstedt. 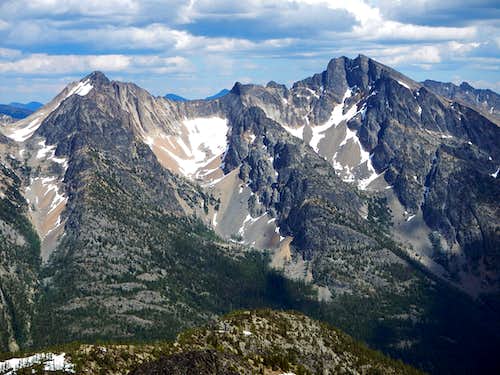 Blackcap Mountain And Monument Peak Seen From The Summit

To climb Mount Rolo's north ridge requires endurance, off-trail navigation skill, and scrambling experience. Mount Rolo is summited on average twice per year. The current summit register placed by Fay Pullen in 2004 reveals that there were no signatures in the years of 2009 and 2010. This lack of interest is significant considering the peak is over 8000 feet tall. The reason might be it's general isolation. Although a trail provides access to within less than a mile from the summit, it is 12 miles away from the nearest road, making a one day ascent impossible for most. However there are several nearby lakes, often used for camping and these include well established tent spots. 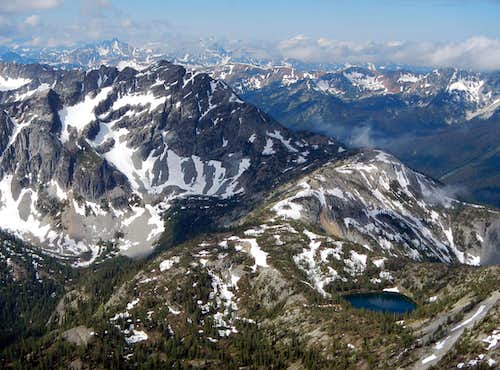 The fact of the matter is, most people who come into this area are either A) general hikers, not summit oriented, or B) working on The WA Top 100 list. Peakbaggers who are coming from Slate Pass will probably Climb Osceola, Carru, and Lago after which they will hit the trail with only a momentary sideways glance at Rolo on the way out. But Mount Rolo can be easily combined with any peakbaggers agenda and will only add 3 hours to the overall time if done at a slow to moderate pace. Those who decide to go for all 4 peaks will find that Rolo has the least amount of loose rock and the most enjoyable scrambling in the group. There is just enough exposure along the north ridge to keep it interesting, but not enough to make it difficult. 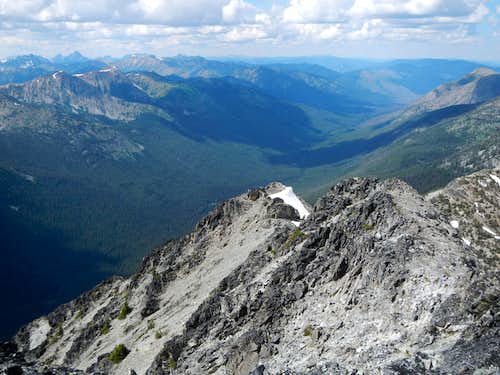 Overlooking The North Ridge From The Summit

Another perk is that a small unnamed lake exists below the north ridge at 7210 feet and this lake is not indicated on any maps. It is shown as a flat dry spot. Perhaps it does runs dry in the late fall, but that is purely speculation. The summit affords impressive views of Osceola, Carru, Lago, Blackcap, Monument, Robinson, Silver Star, Devils, Tower, Golden Horn, Black, Azurite, Ballard, Crater, Jack, and many others.

Starting from Slate Pass at 6900 feet, descend into an upper basin above the Middle Fork Pasayten River valley, on the Buckskin Ridge trail #498.  Initially this trail passes through lovely alpine meadows containing flowers in the summer. Following this trail for just under one mile to an easy to miss but signed trail junction ,“Middle Fork” around 6500 feet. You may note that this junction with the Middle Fork Pasayten River trail #478 is completely different that the trail drawn on the map. The map shows the junction northeast of Haystack Mountain while in reality it is located south of Haystack. Turn right (downhill) and follow a few switchbacks until you reach the bottom of the valley, gradually entering the forest. 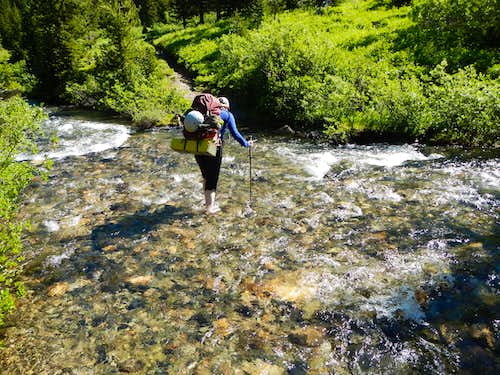 At 3.4 miles you will come to the one and only crossing of the West Fork Pasayten River. There is no bridge or log to use. The water is not deep, but it is cold. After the crossing there are several side trails which lead to meadows and camp spots for outfitting companies. Generally keep to the right and follow the most established path. At 4 miles you will come to another fork with the Robinson Pass trail which ascends in the opposite direction. At 4.2 miles the Ferguson Lake trail leads up to the right. Continue on the Middle Fork Pasayten River trail until you come to the Freds Lake trail #474 junction at 5000 feet after 8.8 miles. 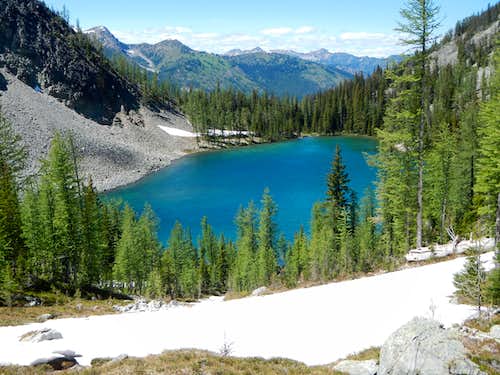 Turn right and ascend multiple switchbacks until you reach Freds Lake. The trail contours the north edge of Freds Lake and then ascends the head of the lake basin to Freds Pass at 7110 feet. Following the trail around a point to the northeast, most will prefer to camp at nearby Lake Doris. But for those who have come to climb only Rolo, you can proceed to the unnamed lake below the north ridge. From Freds pass turn southwest off-trail. There are two highpoints on the ridge which must be passed before coming to the lake. Go over the top of the first one which is the shorter of the two, then from the low point between them, traverse along the southeast side of the higher point until you come to the small lake basin.

From the lake at 7210 feet, ascend talus and scree, or snow in early season, to the crest of the north ridge at 7500 feet. A boothpath in the scree can be followed to the base of the first scramble section. Bypass the first large boulder, following a ledge around to the right to a small notch above a gully. 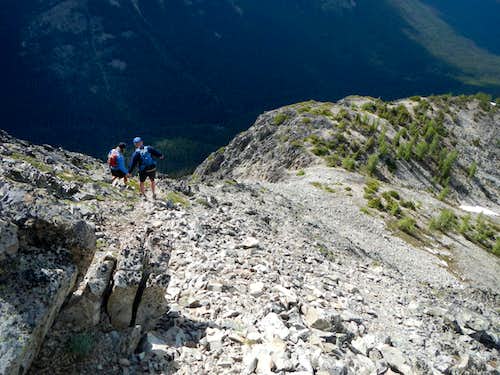 On The North Ridge

Scramble (class 3) up the crest for 20 feet until you reach the broader walkable area above. Some snow patches might linger here late into the summer. Following the crest south you will come to some more steeper scrambling (roughly 50 feet of it) with some loose talus at the base. Above that (7800 feet) the grade eases off again and some of the ridge is walkable. 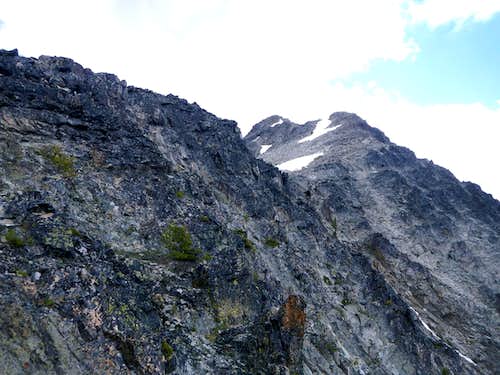 From here you can see the summit on the right, and one more hump (8000 feet) on the ridge to pass over, on the left. When you come to the base of the last hump on the ridge (8000 feet), you will be tempted to traverse onto the west face along easy ledges covered in scree. Don't do it. This will only lead you to the bottom of gullies filled with loose rock. Stick to the crest. 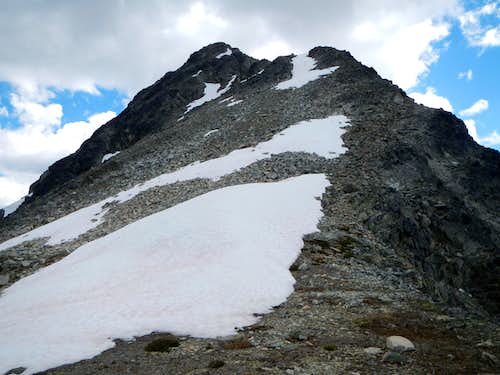 The Broad Section Of The Ridge

The next scramble move is the crux. Some might call it a class 4 move, but there is no exposure of any kind. After the first tough move, class 3 scrambling again brings you to the top of a horizontal narrow stretch of ridge. There is considerable exposure here down the northeast face. The summit block is now within reach. There are a number of ways to finish the peak, but the easiest is to make use of ledges and cross the loose white gully, finally ending with an easy scramble up the west side. 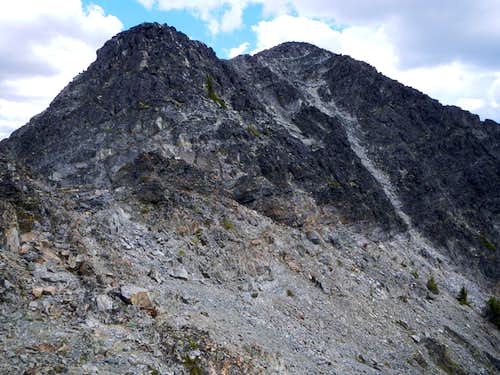 The Summit Visible Beyond The Last Hump

11 miles west of the town of Winthrop on Highway 20 is smaller town called Mazama. Don't blink because you might miss it. One mile from the highway in Mazama, turn left at the junction for Hart's Pass. This should be signed but on some maps it might appear as Lost Lake Road or Forest Service Road #5400. Continue on this road for 19 miles. The pavement ends after 7 miles but usually the road is kept in good condition. At Hart's Pass, turn right onto Slate Peak Road, shown as Forest Service Road #5400-5600 on some maps. Continue for the remaining 1.7 miles to Slate Pass at 6900 feet. If the parking there is limited, backtrack a short distance to the previous switchback in the road and park at the PCT trailhead which is larger.