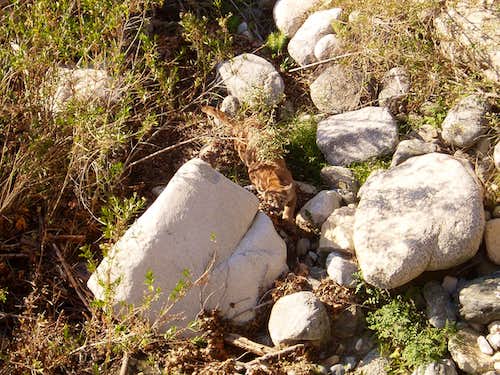 The Mountain Lion, also known as the Cougar, Puma, Painter, Panther and Catamount is the most widely distributed cat in the Americas. Mountain lions require a lot of room—only a few cats can survive in a 30-square-mile (78-square-kilometer) range. They are solitary and shy animals, seldom seen by humans.

Thus far I have been privileged to see two Mountain Lions in the Rocky Mountains. It is an eerie feeling to walk in an area where Mountain Lion tracks are plentiful and the scat piles are fresh. It will certainly raise the hair on the back of your neck. The scream of a Mountain Lion is certainly unforgettable once heard it will remain in your memory forever.

In the Rocky Mountains, Mountain Lions are expanding their home range. In 2000, a Mountain Lion was spotted on a creek in my housing development in the valley over 10 miles from any mountain.

For more information go to Mountain Lion from Animal Planet on You Tube. 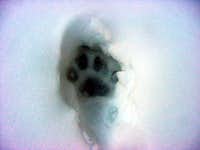 Mountain lions mark out a home area by urinating and defecating on the ground and pulling the material along with leaves into a scrape. By doing this the Mountain Lion leaves a “sign post” about its territory. A typical male is 50-150 square miles in size while a female will have a territory of less than 50 square miles.

With the exception of breeding Mountain Lions are solitary animals. Queens become sexually mature when they are about 2 1/2 years old. The young, called Kittens or Cubs, can be born at any time of the year after a gestation period of 84 to 106 days. Queens can have litters of up to 4 kittens but usually only 1 or 2 will survive. The kittens are born with spots and will learn about life as a Mountain Lion from their mother until they are about a year and a half old. Then they are kicked out and forced to find their own territory and means of survival.

Sibling groups may travel together for months before separating.

Click on the following link to view a video of a Mountain Lion Kitten (Turn the sound down because its quite annoying). 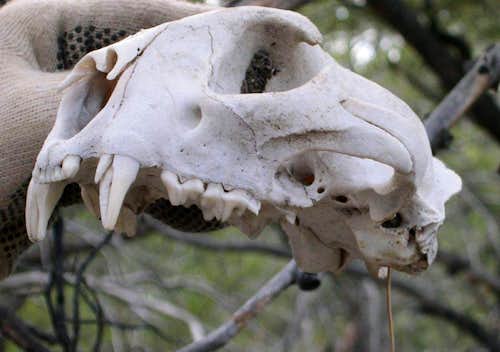 A Mountain Lion skull, MoapaPk photo.
A Mountain Lion is the top predator in a healthy ecosystem. They play a crucial role in helping balance the ecosystem by culling out the weak and inferior animals.

Throughout the Rocky Mountains, mountain lions rely on the deer and elk as prey but it is an opportunistic feeder and will just as easily eat mice, rabbits, beaver, grouse, coyotes, raccoons, porcupine and occasionally livestock.

The size to strength ratio of a Mountain Lion is incredible. It is able to take down animals many times its own size. A 400 pound animal is no match against a Mountain Lion. When it kills an elk the Mountain Lion will land on its neck and pull the elk's head back with its front legs with a force strong enough to break the neck. They typically will hide or bury the carcass and feed on it for several days before moving on for the next meal.

Mountain lions are prized by hunters and hated by ranchers when their livestock was destroyed. As a result, they were virtually eliminated from most of their natural range in the Midwest and Eastern U.S. prior to the start of conservation efforts in the mid-20th century. Today only the endangered Florida panther survives along with the Mountain Lion of the West.

Conflicts are increasing due to increasing populations of Mountain Lions and the growing trend towards building housing developments in the Mountain Lions habitat. As a result, conflicts between Mountain Lions and humans are increasing. Most of these conflicts occur over food sources of some type such as garbage, pet foods or even the pets themselves. Many of these interactions involve younger Mountain Lions that are focusing on developing their own home range. In the last 100 years in North America, there have been 50 recorded attacks on humans with 10 fatalities. 9 out of 10 of those fatalities were children. In the last 20 years there have been 80 attacks. Most of these attacks are from young animals, disease has not been a predisposing factor in lion attacks.

It is recommended to carry Bear Deterrent Spray as a defense against Mountain Lion and Bear attacks.

Dogs are not a deterrent to attack from Mountain Lions. Dogs may actually lure the attacking Mountain Lion to the human.

How to reduce the chances of an encounter with a Mountain Lion:

How to reduce the chances of an attack when encountering a Mountain Lion:

•Give them a way to escape.
•Don’t turn your back on them, you will appear weak.
•Stay calm and face the lion.
•Look directly at it.
•Try to intimidate the animal by yelling and raising your arms.
•Do not run, this may trigger the lion's instinct to attack.
•Pick up small children so they don't panic and run.
•Avoid bending over or crouching.
•If the lion acts aggressively, throw rocks, branches, or whatever can be obtained without turning your back or bending over.
•Fight back if attacked. Since a mountain lion usually tries to bite the head or neck, try to remain standing and face the attacking animal.

The World Conservation Union (IUCN) currently lists the cougar as a "near threatened" species.

However, biologists predict that Mountain Lions could possibly begin to spread back into their former home ranges. There have been Mountain Lion sightings in both Missouri and Arkansas. How will mankind respond to the Ultimate North American Predator invading urban America? It is possible, if humans allow it.

I enjoyed it. Good info and photos.

I am glad you liked it.

The best I have seen in a long time. Great information and use of pictures.

Thanks Bob for the kind words.

Thank you for the information on mountain lions

And for posting my picture for your article.

Thanks for the informative article. Some cool pictures and lots of information. Also, there have been mountain lions spreading into the mid-western states in recent years. My grandfather lives on a large farm in the country in Illinois and has had and seen them on his land.

wow that's real interesting. we have had them in our neighborhood but we live in Montana and close to the mountains. usually the subadults follow the creeks down to hunt deer. my daughters boyfriend saw one on Wednesday while he was out hunting elk and deer.

Indeed, I didn't believe him the first time he told me! I'll have to email him and see if he's got any pictures on his computer of the tracks and/or the cats themselves! I would love to see a cougar in the wild some day, hopefully not too close tho.

Great article and an incredible picture; I don't think I'd want to see that mountain lion like that unless the photographer had a great zoom lens. We have had problems with a mountain lion locally, and one has been spotted in the Verdugo Mountains. There have also been some recent sitings and attacks involving hikers and mountain bikers. So even in a populated area, they can still be a problem. There is also another good picture of a mountain lion posted on SummitPost under San Gabriel Mountains, that one looking down at it. Such pictures make me a little leery, especially since I like to hike in a brushy area where a mountain lion could hide, and it is an area where on has previously been spotted.

I had mountain lion tracks all over my front porch(literally right outside my doorway) 3 or 4 days ago.Just north of the Nevada border where I live has many, many lions, but you almost never see them 'in person'.

The scream of a Mountain Lion

... is certainly unforgettable once heard it will remain in your memory forever.

Agreed, the Verdugo Mountains here in the Los Angeles area are home to at least one cat and maybe more. About seven years ago I was hiking in a back canyon when I heard a cat take down its prey. It was well ahead and out of sight but the sound of the struggle and fight is embedded strongly in my memory.

I've never encountered one, yet, but it's good to know that bear spray is recommended. Thanks for taking the time to research and post this article.

You may have already seen this stuff but if not, it is quite interesting. Here's a link regarding attacks on humans from 1890 to 2012. It's a long list. http://www.cougarinfo.org/attacks.htm

Also, this book has a lot of info on the lions adaptation to living around humans. Since reading it, I carry a big knife along with my big stick when I hike alone. http://www.beastinthegarden.com/Home.html

I have watched from by Kitchen window as a pair of male cougars went at it during mating season. My dog brilliantly cowered in his doghouse not saying a peep. Lets just say the backyard was destroyed... Have beaver, bear, elk, deer, bobcat, muskrat, and yes cougars go traipsing through my yard on a near daily basis. My dog thinks the rabbits make great squeeky toys.