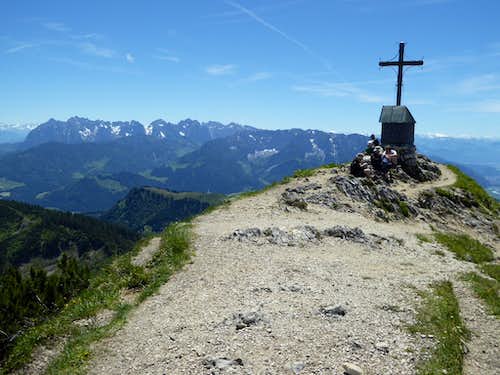 One of the most prominent and therefor most frequented summits of Chiemgau Alps is Geigelstein.

Despite its “only” 1808 m, Geigelstein is a good portion higher than the surrounding summits and thus offers spectacular views.

The adjacent summits are Chiemgauer Breitenstein to the south and Roßalpenkopf to the north. Laubergraben and Talgraben go down from near the summit to Prien valley, Lochbachgraben and Schneiderhangraben do the same down to Tiroler Ache valley.

Despite of being very frequented some Geigelstein routes are astonishingly solitary and quiet. Maybe this is due to the fact that there are so many routes. But all are ending at the same culmination point: Geigelstein (mostly crowded) summit.

by using highway A 8 from Munich or Salzburg to exit Frasdorf, then on road number St2093, passing through Aschau. Both hiker parking areas (fee required) are directly besides the road and are signposted.

Schleching can be reached by car

by using highway A 8 from Munich or Salzburg to exit Bernau, then on road number B 305 to Marquartstein. Turn then on road B 307 to Schleching.


Walchsee / Winkl can be reached by car

from highway A 12 (Innsbruch) / A 93 (Munich, Rosenheim) by using exit Oberaudorf. Cross the German – Austrian border and proceed on road number 172 to Walchsee.
Turn there on Hausbergstraße and proceed to Winkl and a hiker parking area.


All trailheads are not directly linked to the railway system. You have to use busses from the nearest railway stations – Aschau for the Sachrang trailheads; Bernau for the Schleching trailheads, Oberaudorf for the Walchsee trailhead. See the Chiemgau Alps main page for further information. 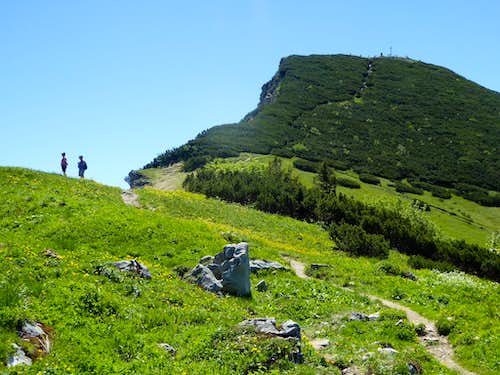 From Priener Hütte follow the forest road to its end at Oberkaser Alm. Ascend trail number 200 (also 207, 8, 20) to the col between Rossalpenkopf and Geigelstein and follow the trail up to the summit.

Shortly after the junction point of the forest roads from Schleching and Schleching / Huben trailhead a trail leaves the forest road to the left. Follow this marked route (number 207) on trails and partly on forest roads up to the lovely Schreckalm. Proceed on the trail number 3 to Sulzing Alm where you meet the route via Priener Hütte. Ascend the summit as described above.

Follow the forest road from the parking area up to Wuhrsteinalm and further on to Wirtsalm, where the road ends. Ascend on trail number 8 to the broad col beween Geigelstein and Breitenstein and follow the trail up the south ridge of Geigelstein to the summit.

Ascend the forest road starting at the trailhead to a road junction at about 900 m near Alpbach valley. Follow the marked route, first on a road then on a trail on the orographic left side of Alpbach creek until you rejoin the first forest road again. Immediately after that you arrive at Schusterbauer Alm where the road ends.
Trail number 81 / 207 takes you up to the south slopes of Weitlahnerkopf and to a trail junction with the northern route via Weitlahnerkopf. This summit can easily climbed from the trail junction within 10 minutes.

The ascent trail goes west and then southwest and hits Roßalm, the highest Alm of Chiemgau Alps (food and drinks available).

At Roßalm the trail goes south to the col between Roßalpenkopf and Geigelstein where it meets the Schleching routes. Climb the north ridge of Geigelstein on a good trail to the summit.

The northern ascent uses the forest road of Dalsenbach valley up to Dalsenalm. From there on follow a trail number 200 (also 8 or 20 up) the north slopes of Weitlahnerkopf until you reach this summit. Turn west to Roßalm and follow the above described route to the summit. 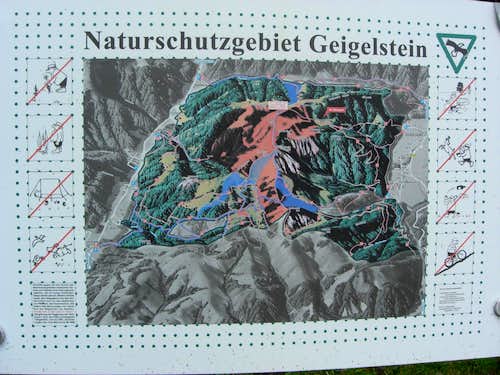 Huge parts of Geigelstein area are a nature protection area.

There is a core zone which is closed for hikers and ski tourists from 1st december through 31. may every year.

Ski touring is possible in special indicated corridors within the protection area, as is snow shoe touring or hiking on the marked trails!

Mountain biking is forbidden in the protection area as is camping, fire, domestic animals, collecting plants.

Please respect all regulations and stay on the trails or the marked ski routes.


Accommodation can be found at:

Geigelstein is a year round summit.

In spring, summer and autumn it’s the hikers realm, in winter and early spring it’s a well known ski and snow shoe target.

For your hiking activities bring good shoes, maybe hiking poles and in spring and early summer some gaiters.