Simply put, Cedar Mountain is the “hill in my backyard”. It’s sort of a stretch to call the mass a mountain since it rises only 1300 feet above the Yampa River Valley, but that’s the name the mapmakers have given it. If it does qualify as a mountain it is the mountain I have climbed more than any other mountain in the world. The reason is because the trailhead is about five minutes (15 by bike) from my house rather than it being my favorite mountain in the world.

Because of its small nature I have put off adding such a peak to SP for years, but I guess I should just finally add the thing in case anyone is passing through Craig and wants a quick and easy summit with fine views. The peak does have radio towers on each of the two highest summits (only two feet apart in elevation), but does have a nice hiking loop.

The mountain (hill?) is interesting geologically. Several sources (mostly local) claim that Cedar Mountain is a dormant or extinct volcano, but this really isn’t the case. In reality the peak is an old lava flow from the Elkhead Mountains that protected the underlying bedrock of soft sandstone.

Of note, LiDAR has recently shown that the south summit of Cedar Mountain is the highest point even though the topo maps show the north summit as being slightly higher. 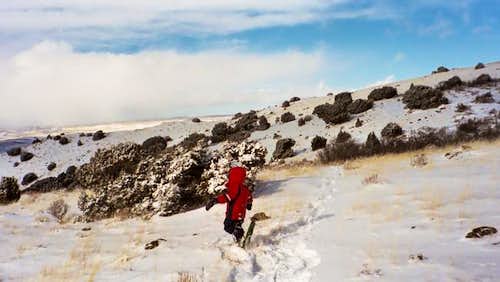 On the west side of Craig along Highway 40, turn north on County Road 7. Drive north for about five miles to the signed access to Cedar Mountain on the right. Turn right on the signed road for Cedar Mountain (BLM Road 2190) and park at the picnic area. 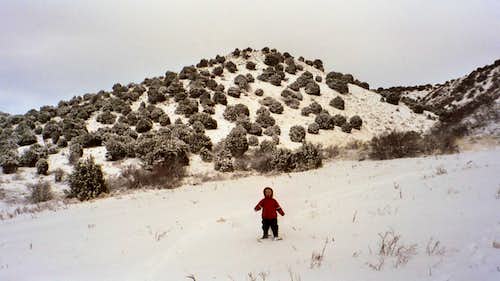 Kessler is ready to climb Cedar Mountain. Photo taken not far from the trailhead.

From the picnic area a signed loop trail of 3.5 miles first heads east. There are numbered post pointing out various views, vegetation, animal habitat, etc, but I’ve only seen brochures in the case once. It’s a nice hike with fine views and opportunities to see wildlife such as elk, deer, squirrels, marmots, rabbits, fox, coyote, raptors, etc.

There are some cliffs on the saddle just east of the second highest peak that can be toproped, but the rock can be pretty loose. 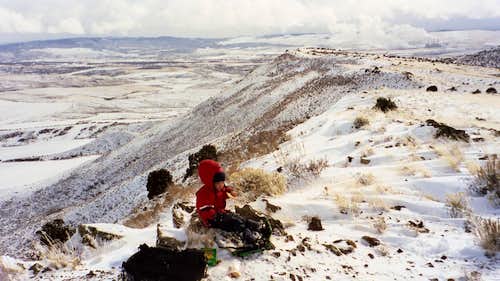 Having lunch on the ridgetop of Cedar Mountain. December 2005.

No red tape other than vehicles must stay on designated routes. 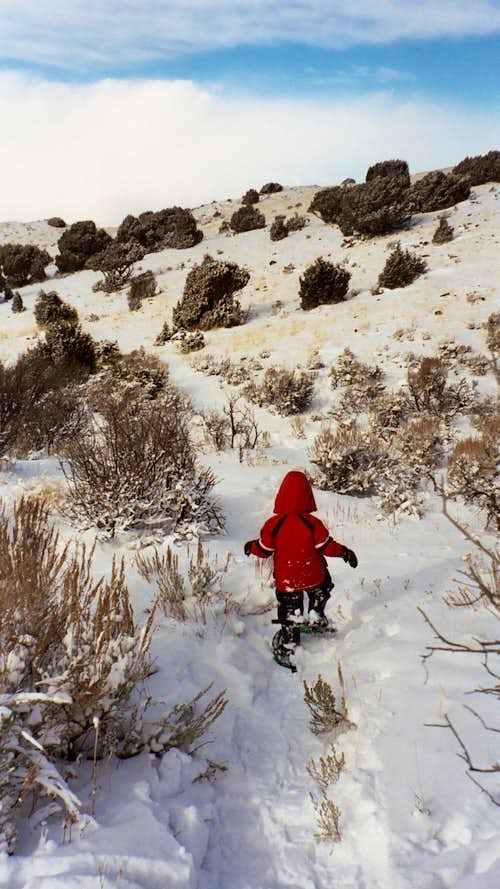 No camping is allowed on Cedar Mountain or at the trailhead. The best place to camp in the area is where Highway 13 crosses the Yampa River south of Craig. There is a nice campsite for a fee of $5.

I have climbed Cedar Mountain every month of the year and sometimes even multiple times in the same week. Any season is a good time to go.

This is the high desert with some of the widest temperature ranges in the country. In the Craig area, temperatures have varied from 100 in the summer, and -56 in the winter. Summers are warm and can be hot. It can be in the 90's, but mornings and evenings are always pleasant and it cools off quick at night. Winters are cold, and the winter extremes can be ridiculously low here. In the winter months, temperatures of -30 are fairly common, without the windchill, but on a sunny winter day without much wind, the climb is really nice.

In early spring, and possibly well into April, the trails can be muddy. Winter skiing and snowshoeing can be good and there is usually enough to ski or snowshoe the route December through March and maybe into April in some years. 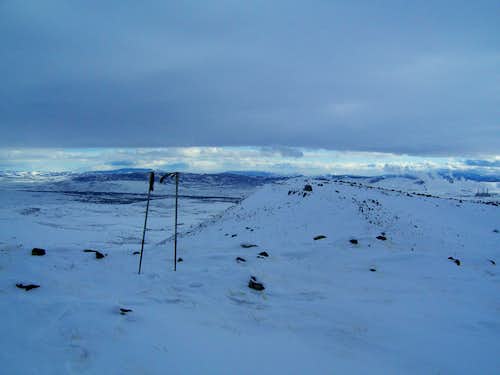 A cold winter climb on Cedar Mountain on December 29, 2007. This was my last mountain climbed of the year.

Below is the climate summary of Craig (Craig-Moffat Airport), which is very close to Cedar Mountain. The data is from 1982-2021. Craig is at 6300 feet elevation, so expect the temperatures to be fairly similar, but perhaps slightly warmer on winter nights and a bit cooler in summer.