My wife Courtney and I headed to North Conway to attend a 3 day mountaineering course with a well known local outfit. After meeting at their shop we met our instructor and sat down for some gear discussion and fittings for boots, crampons, ice axes, and helmets. We spent the majority of the first day at Willeys Slide where our instructor, Sam, taught us crampon, ice axe, self-arrest, and belay techniques. We spent a few hours practicing before we finished the day with the three of us climbing the 700-800 ft slide, including 5 or 6 decent pitches. 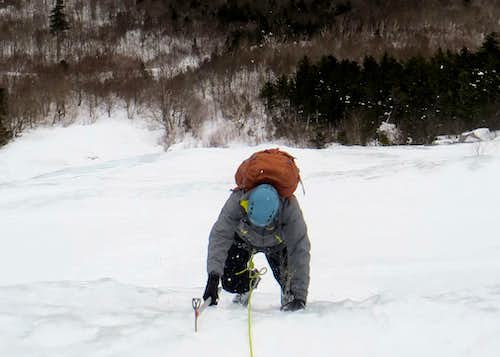 Me climbing the last pitch on Willeys Slide

On the second day we again met Sam at the IME shop and spent an hour or so discussing camp gear, clothing, and food, as well as the itinerary for our two days on Washington. We packed all of our gear into our packs and headed out to Pinkham Notch. Unfortunately the lot at the visitors center was full as it was a great day for skiing in Tucks so Sam brought our vehicle down to the overflow lot at Wildcat Ski Resort. He was hoping to get a ride back…..he didn’t. At Sams request, my wife and I got a head start up the Huntington Ravine trail and Sam caught up with us. We arrived at Harvard Cabin after about 90 mins and set up our tents in the two spots just to the left of Harvard. Once camp was up we hiked up into Huntington’s Ravine for snow anchor and belay training. We were all shocked that during our training session, a man in his late 50's, early 60's appeared from the trees in jean and a black leather jacket with 4 or 5 gold chains around his neck. The only equipment he had with im was a pair of ice tools and after speaking with Sam for a moment he decided to put of an attempt at Pinnacle. We were glad. I had no desire to see an old man fall to his death. When the sun headed own we threw on a layer and got back to camp, cooked dinner, and went off to sleep. 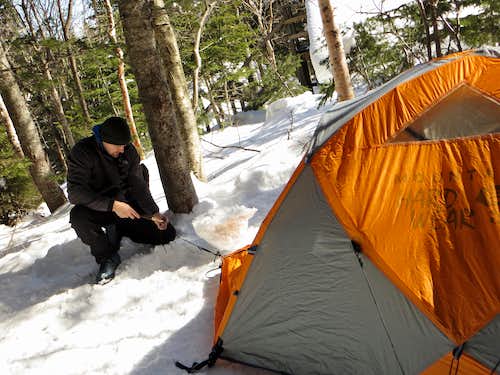 First thing in the morning we got up, got breakfast and headed out for the Lions Head Winter route TH. A short distance into the trail there is a nice spot to stop and put on crampons right before the steepest part of the trail. We took advantage. Just ahead of us were a group of ROTC guys in Yaktrax and they were clearly having a hard time on the infamous rock/ice section of the trail. We had to retrieve a lost Yaktrax for them more than once. We came up out of the tree line and stopped for quick drink prior to heading up to Lions Head. After a brief rest there, we pushed through Split Rock and Alpine Garden and up the summit cone. The trail was not overly busy due to our head start and we summited at about 1130am after climbing for about 3.5 hours. We met many more groups on the way down and from the sound of it we beat an eventual 30-60 min bottle neck.

We happened to do this climb during a 5 day stretch when the sun was shining, winds were only 30-40 mph, and temps got up into the mid 30s. The rest of the month had been teens at best. We couldn’t have asked for better. 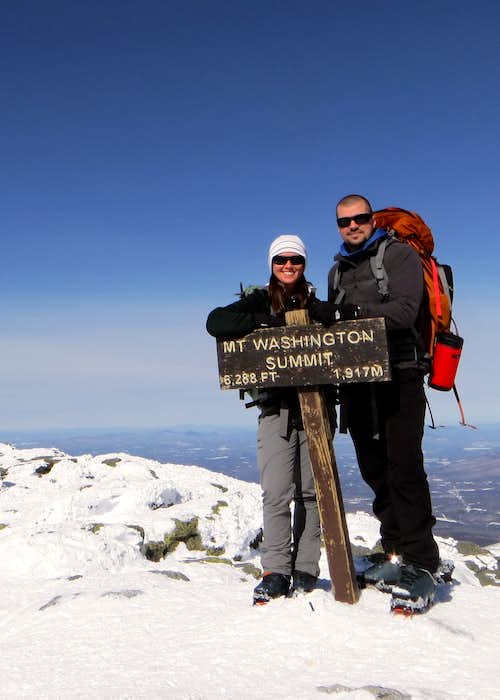 Courtney and I at the summit

Lions Head winter was exactly what I expected, a short, steep, somewhat technical climb with great views and great people.