I have had a goal for several years now to do a one-day winter Presidential Range traverse.  Having hiked all 111 4000-foot peaks by 2009, I had been on all of the peaks before and was familiar with the trails in summer, having previously done two summer Presidential traverses.  I had also hiked the Lions Head trail to the Mt. Washington summit in February 2009 for my first winter peak of the Presidential Range.  That day had gone smoothly but I also knew I did not want to spend a night camping while doing a winter Presidential traverse.  I have always found that I can cover much more ground going light and fast than I can going slow and heavy and backpacking.  That being said, the risks of winter hiking are considerably increased as compared to other seasons.  A night stuck in the wilderness in winter could easily mean hypothermia or frostbite whereas in the other seasons a night stuck in the wilderness might only mean being uncomfortable, wet, and hungry.  In the previous year, I did some winter mountaineering on smaller peaks to gain more winter hiking experience.  I did West and East Baldpate in December 2014, Mount Liberty and Mount Flume in March 2015, and South and North Baldface in March 2015.  These experiences convinced me that I needed some warm and comfortable winter boots and some Kahtoola microspikes.  I purchased these items in the autumn of 2015.  I tested them on some smaller hikes near my home in Denmark, Maine.  Now I felt ready for some winter hiking!

The winter of 2015-2016 began as an El Nino winter.  The western US got lots of rain and snow and the eastern states including New England was dry and warm.  I found myself hiking in a T-shirt of Christmas day!  Finally we got some snow in the mountains which greatly helps to cover up the ice on the mountain trails.  The forecast for Thursday, January 7 looked very promising.  Mostly sunny, light winds, and comfortable temperatures in the upper 20's even for the higher summits.  I decided this was my chance for a great day of winter hiking.
I prepared my backpack for a winter hike with the following items.
3 Nalgene water bottles filled with hot water
8 granola bars
2 sandwiches
1 apple
1 banana
lighter(did not use)
emergency blanket(did not use)
2 flashlights
extra batteries(did not use)
toe warmers
hand warmers
microspikes
ice axe(did not use)
extra socks(did not use)
extra gloves(did not use)
balaclava(did not use)
googles(did not use)
sunglasses
compass(did not use)
topographical trail map
water filter(did not use)
duct tape
toilet paper
warm fleece
cell phone(for emergencies and for photos)
I wore polyester long underwear top and bottom, a nylon T-shirt, a gore-tex bib pant-suit, and a synthetic down jacket along with a regular hat and gloves.
I found myself driving toward the Presidential Range and arrived at the Appalachia parking lot on US Route 2 around 6:45am.  I saw another hiker getting read to hike Mt. Adams and Jefferson.  By 7am, I began my hike.  I left my snowshoes in the car, concluding that if trail conditions required snowshoes, I would have to turn around anyway.  As it was, the trails only had about 6 inches of snow and were well packed out. 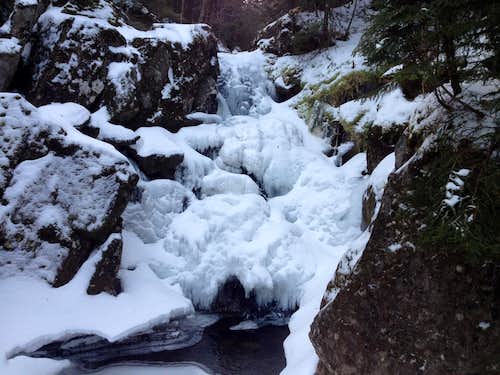 The Watson Path crosses a stream below a waterfall. It is frozen in winter.
I took the Watson Path up to Mt. Madison and arrived on the summit around 10am.  The Watson Path was the toughest part of the day as it is a rough, steep trail, and when it broke our above the tree line, there were lots of boulders on the north side of the Mt. Madison summit.  I wanted to walk on snow and ice; not rocks with my microspikes.  They did well on both but I do not want to wear them out.  The trail down to Madison hut was much better and held more snow between the rocks.  I found the rest of the trails to be holding enough snow that I did not have to walk on much rock the remainder of the day. 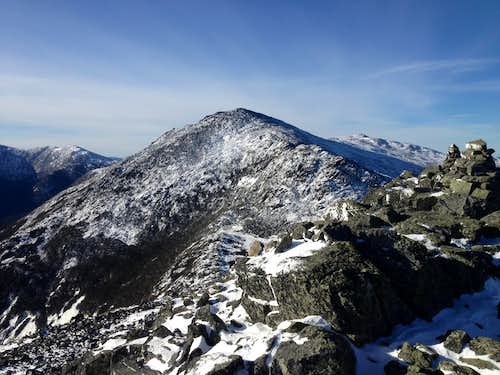 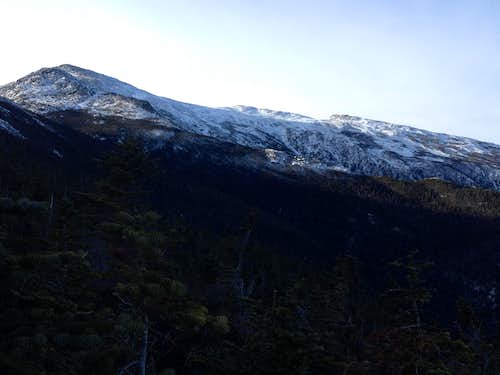 Mt. Adams from the Watson Path
I rested and ate some food at Madison Hut and then began the hike up Mt. Adams.  I particularly enjoyed the trail over Mt. Adams as it was filled in well with snow to walk on.  I had targeted to by on Madison at 10am, Adams at 11am, and Jefferson at noon.  However, that was a bit of a lofty target.  I arrived on Mt. Adams at 11:15am 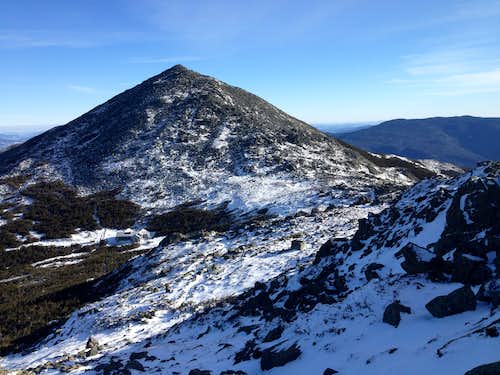 and Jefferson at 12:30pm.  I saw three other hikers while crossing Mt. Adams.  I particularly enjoyed the trail and views on Mt. Adams and Mt. Jefferson. 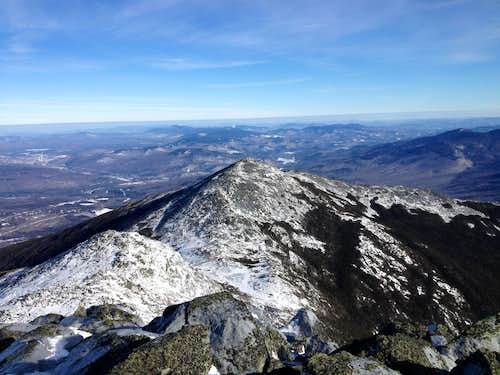 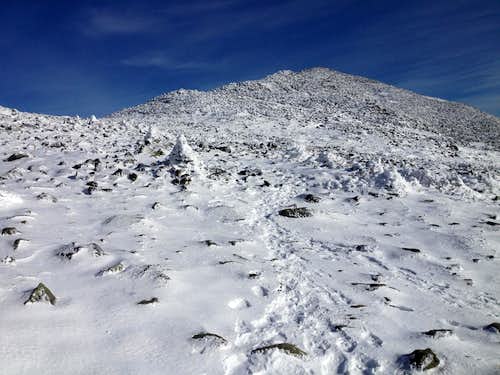 Mt. Adams summit from the trail to Mt. Jefferson
The white snow and blue skies made for very colorful photos.  The breezes on the summits settled down to calm air on the saddles in between. 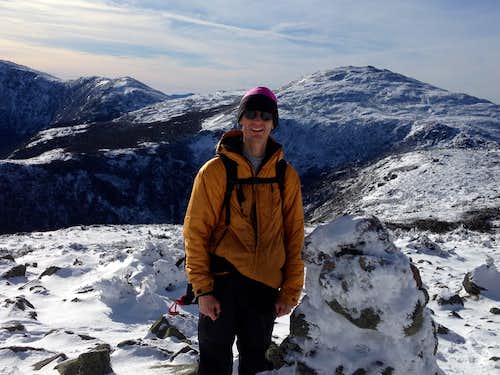 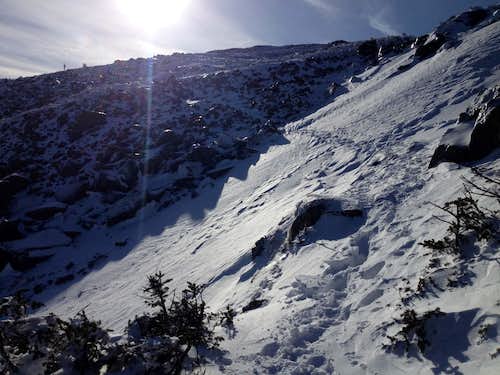 On the trail to Mt. Jefferson. In icy conditions, an ice ax might be good here.
I made a decision to go for the Presidential traverse rather than return via Mt. Adams and Lowe's Path.  I was moving well and making good time on the trails.  The trail conditions were excellent and the weather was the finest I have ever seen on the high summits in winter with temperatures reaching the upper 20's.  I enjoyed the traverse over Mt. Clay, one of the most beautiful peaks that does not count on the lists because its saddle with Mt. Washington is less than 200 feet. 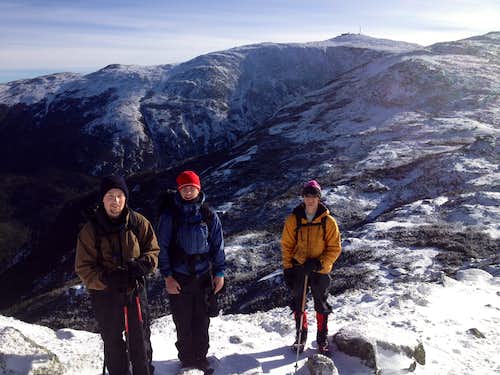 I passed three other hikers near the Mt. Clay-Jefferson saddle 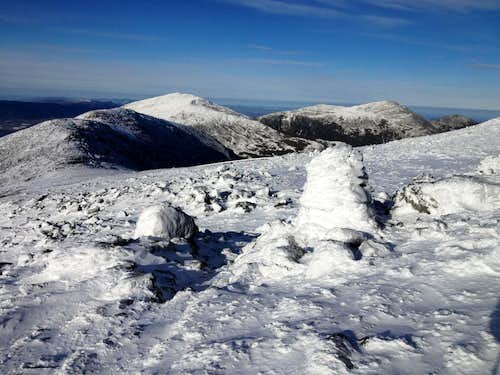 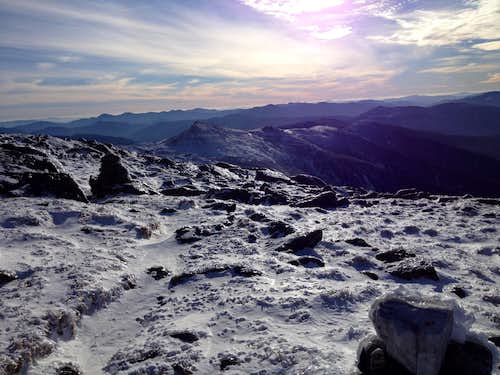 Mt. Monroe from the Westside trail 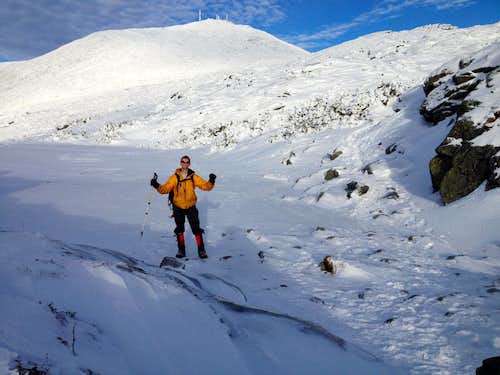 A frozen Lakes of the Clouds
and my next summit, Mt. Monroe. 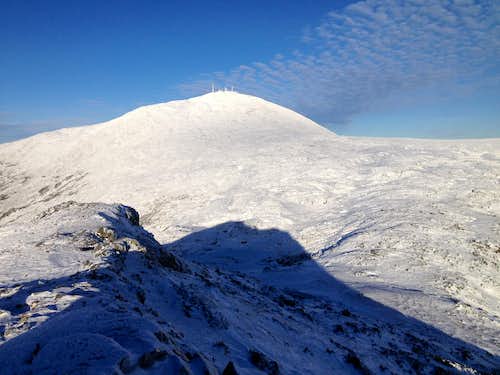 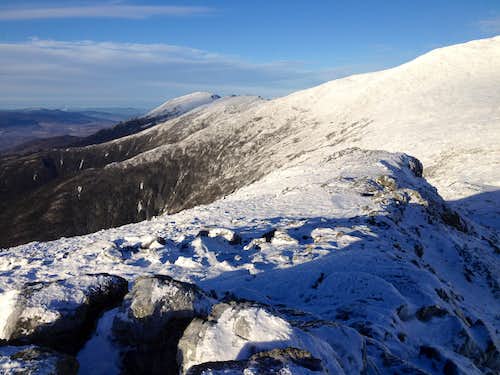 I arrived on Mt. Monroe at 3pm.  My goal was to be down below treeline on the west side of Mt. Eisenhower by the time things got dark. 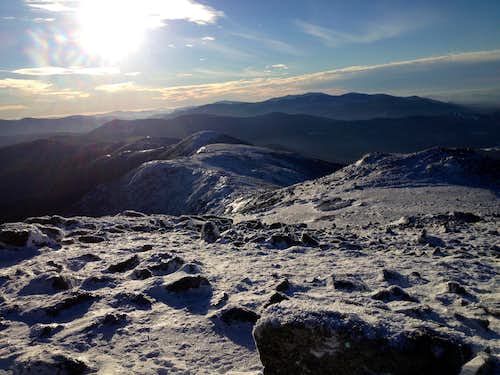 The southwestern Presidentials from near Mt. Monroe
The trails from Mt. Monroe to Crawford Notch are very good and much easier than the rugged northern Presidentials.  I made good time to Mt. Eisenhower and summited around 4pm. 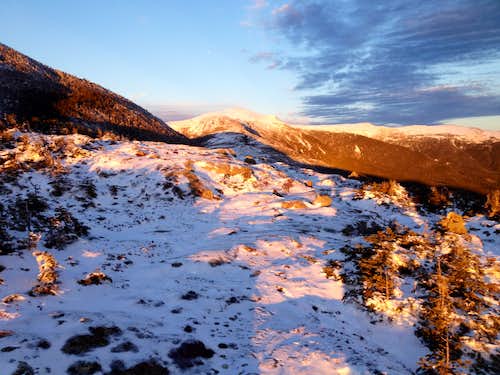 A view of the Presidential Range from near Mt. Eisenhower 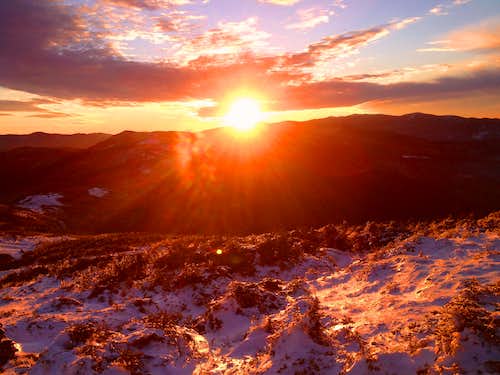 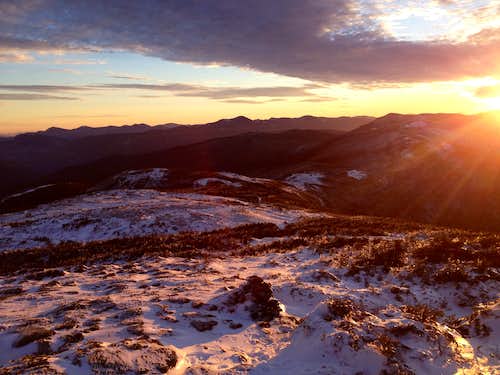 Sunset over the Franconia and Sandwich ranges of the White Mtns as seen from Mt. Eisenhower on 1-7-2016
I also got to witness one of the finest sunsets and alpenglow I have ever seen. 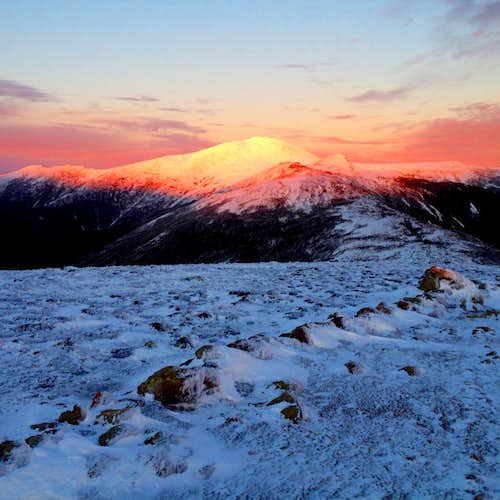 Alpenglow on Mt. Washington at sunset. This is viewed from Mt. Eisenhower. 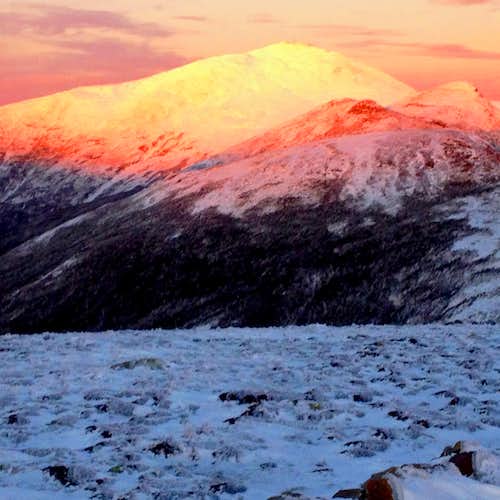 Mt. Washington alpenglow up close as viewed from Mt. Eisenhower. 1/7/2016.
Back to the northeast, Mt. Washington's snow-covered cone was lit up pink in the fading sunlight.  After photographing this, I quickly hiked down below treeline in the remaining daylight.  My last summit of the day, Mt. Pierce, would be done in the dark by flashlight.  The trail was well-packed out and easy to follow.  I reached the Mt. Pierce summit around 5:15pm, and then back-tracked down to the Crawford Path.  The Crawford Path is an excellent gently descending trail and was easy to follow in the dark using my flashlight.  I saw another hiker coming up the trail in the dark who was doing a night time traverse.  He gave me a good tip to call Bruno from the Colonial Fort Inn in Gorham, NH for a shuttle ride from Crawford Notch to Appalachia trailhead.  By this point, I could tell I was getting tired, but I just kept putting one foot in front of the other.However, I was feeling much better than I had when I had done the summer traverses and got down to the AMC Highland Center lodge by 6:24pm.  I had done it--my long-time goal of doing a 1-day winter Presidential traverse was now completed.  I waited in the warm lodge for my shuttle ride to show up.  The rest of the evening was uneventful and I was home and in bed by 10:30pm.  Needless to say, I slept well that night and also took an extra nap the next day.
After doing this hike, I am excited to continue my winter hiking goal of reaching all 48 NH 4000-footer peaks in the winter.  Every season has its own unique beauty and I am blessed to have done this hike in such good trail and weather conditions.
If you are considering attempting a one-day presidential traverse, be sure to get some winter hiking experience and note your comfortable hiking speed.  You need speed, but not so much speed that you sweat.   Start considerably earlier than I did, and wait for very favorable weather and trail conditions.  They do not come along all that often.  Also, if there has been a deep snowpack and a lot of new snow, there may be a couple of trail sections exposed to potential avalanches.
UPDATE:  On 1/31/2020, I did my 2nd one-day winter Presidential traverse.  A detailed video of the hike can be found here:  https://youtu.be/dyk4eQTNSsM

Looks as though you lucked on for perfect conditions.

As is started reading, I thought a one-day traverse was impossible - starting at 6:45 a.m.???? But then I saw the conditions. I don't really consider it a "winter" traverse. :) One heck of a day regardless!!!