Easy accesss to Mt Sebastopol from Mt Cook village make it an attractive destination for day hikers and rock climbers. It offers 750 metres of elevation gain from the village to the summit and is an ideal "warm up" climb for mountaineers as well as offering an opportunity to climb a peak for those who have limited time, or are unable to link up with partners for more technical peaks in the area.

The views from either Red Tarns, approximately half way up, or from the summit itself would have to be among the very best in Mount Cook National Park and, probably uniquely, offer a panorama which takes in not only Aoraki/Mt Cook and many of the surrounding peaks but both the Tasman and Hooker Glaciers which, being on opposite sides of the Mount Cook massif, cannot be seen simultaneously from most peaks in the area except on the Mount Cook massif itself. 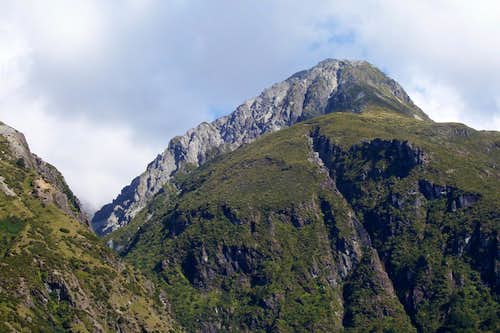 Mt Sebastopol viewed from the east near the main road into Mt Cook Village. The upper part of the hiking route is visible on the upper right.

The eastern side of Mt Sebastopol, which is easily accessed from the main road into Mt Cook Village, has been a popular rockclimbing area for over a hundred years.

From the Mt Cook Day Shelter located pretty much in the centre of the village. Simply take the footpath in a southerly direction. (There is a map posted on the wall of the day shelter). After about half a kilometre the footpath branches into the Governor´s Bush Track and the Red Tarns Track.

Take the Red Tarns Track which leads over a footbridge and then commences a rapid elevation gain along a well constructed path/stairway to the Red Tarns which sit on a glacial bench about half way up the mountain. Most casual hikers are happy to call it a day at that point and simply take in the terrific views of the Sealy Range, Mt Sefton, Aoraki/Mt Cook and surrounding peaks and glaciers. The hike to this point is well worth it even if you don´t plan to continue to the summit.

From the tarns, continue up to the obvious saddle on the left of the summit area. (The left as you view the summit from the tarns). There is a reasonably well worn path leading up to a rocky outcrop in the centre of the saddle.

As you pass above the rocky outcrop you simply make your way up to your right towards the summit. This section is a bit crumbly in places but if you are careful about your footing at all times you shouldn´t have any problems.

There are a few metres of scrambling at the top which will bring you up on the summit ridge which is really a series of rocky pinnacles and loose scree. 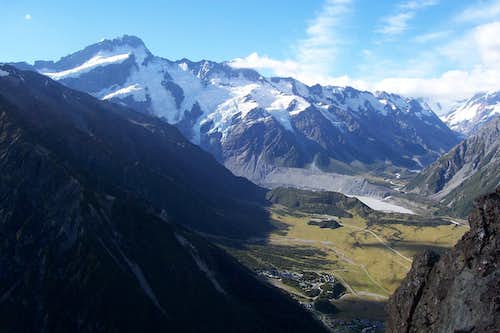 Mount Cook Village and the Hooker Valley from the summit. Mt Sefton is the high peak on the left.

There are no permits or fees applicable.

Camping is available at the White Horse Hill campground which is located about 2km north of Mt Cook Village. Camping fees are 6NZD per adult, 3NZD per child. Hot showers were not installed as at January 2008 but a hot shower is available at the day shelter from which your hike up Sebastopol commences and finishes. You will need a 1NZD coin to operate the hot water system or, if you can brave the cold mountain stream water supply, you can have a free cold shower. 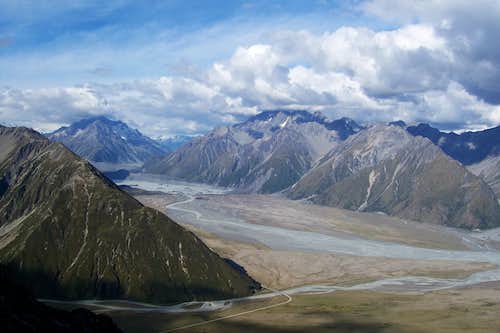 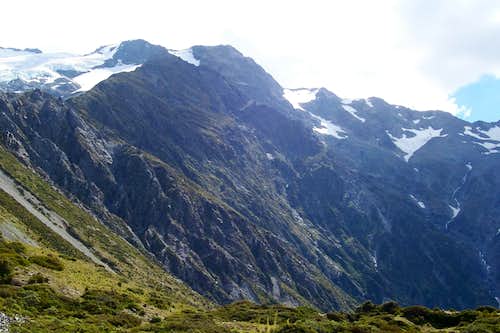 View northwards along the Sealy Range from just below the summit of Mt Sebastopol.

This is a good addition to Summitpost. But I noticed the coordinates are a bit off and show the peak as located down in the valley. Try these for more accuracy (-43.753188, 170.099362). Also this page should be attached to the Southern Alps page.