Brief report of a trip to Pyramid, Window and Window Peak

One has to wander alone to find himself/herself. At least this applies to me. I can’t imagine anyone taking this away from me, it would be like breaking my soul. And I am not alone, I have my faithful companion with me - my Duchess.

I planned a vacation for the indian summer a long time ago. Fall is my favorite season of the year, and fall in Colorado typically means stable weather and pleasant warm days. This year was an exception. We got rains and floods, and snow at higher elevations.


My original plan was to go backpacking to Mt. Oso group. I wanted to have a remote place with nice mountains to scramble up to, and the area seemed perfect. It is very hard to reach and very distant from any civilization. It offered a solitude I was looking for. And Mt. Oso SP site definitively is in a need of some more information and improvement. I studied the area and printed detailed maps. I was so ready for this trip, did my homework, now just had to experienced it. But the weather was not co-operative. It was raining and pouring the whole day the day before my planned trip (and we had floods days before), the ground was so wet and rivers were high. I knew that the road to Bear Town would not be passable. There were stream crossings to be negotiated, and guide books said very hard after a rain; and muddy sections on the road, which are impassable when wet. Also, the travel required a crossing of Stony pass over 12,600 feet, and there was snow up there. The forest service information did not say much, only that is is not maintained. No, I was not willing to risk the drive there, I made a quick change of plans, and with my backpack ready, I drove to Thirty Mile Trailhead to attempt Rio Grande Pyramid. I was happy to do so, just driving over Slumgullion Pass (11,530 ft) felt like winter land. The trees were blanketed with snow. I was not ready for the winter time yet. What happened to indian summer? 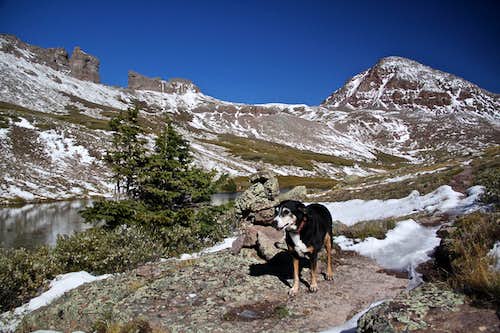 Nice view of Rio Grande Pyramid and the Window as seen from Opal Lake.

We started our hike on Weminuche trail late, around 3:30 PM. I did not know much about the trail or routes up Pyramid, and the only information source was the Weminuche Wilderness National Geographic Map. I was excited about figuring the route on my own. The trail along Weminuche Creek was incredibly muddy. There was no dry section on that trail - puddles, mud, swampy areas and marshes. I slipped and got myself so dirty just a couple of miles into our hike. And Duchess was covered in muck, and I was going to share my sleeping bag with her! I was hoping that the trail would get better higher up, but it continued to be a marshy path all the way. The stream crossings were hard as well - water was wild and crossing logs/boulders were under. I had to take my shoes off and wade through icy waters reaching up to mid thighs. So, not only soiled with mud, but also wet. And Duchess wanted to be carried over the deep waters. I had nearly enough.


We reached the Weminuche Pass area and set up our camp in some previously used campsite with a build in fire pit. I could not make a fire (wood was too wet), but made a quick dinner and tea, and off to my warm sleeping bag. I brought a book to reread and fell asleep while listening to howling coyotes nearby. I don't think Duchess heard them, she appears to be deaf for the past few months (not hearing cars etc.). My plan was to sleep late and wait for the day to warm up, but Duchess changed my plans. She was ready to go around 6:30 am. I quickly made my mix of hot chocolate a coffee, put a granola bar in my pocket and off we go, breakfast while hiking. The path was better in early am - the puddles were frozen and it was easier to move. The morning along Rincon La Vaca was crispy and beautiful. Soon our destination came into the view - a nicely shaped pyramidal peak with window to the south. I felt a sudden peace of relief of knowing where to go.

We followed the trail higher up, not well signed, parts of it buried in a deep snow, but still easy to follow. Our destination was no longer in sight. We saw some hunters on their horses (I forgot to mention that the trail mud had a mix of horse manure as well, Duchess smelled great laying in the tent next to me). We took a hide in the trees and waited for them to pass, I was in no mood to talk to people. The trail followed some creek with waterfalls and was winding its way up. Finally, some peak appeared on horizon - it was Point 13,261, a nice looking peak. I was not sure at what point to leave the trail and decided to stay on it until we reached a signed post with Contitental Divide mark and Opal Lake. We skirted along the lake and hiked up easy southern slopes of Window Peak first. The first section was an easy scree, grassy slopes higher up. Window Peak does not look that interesting, but it offers excellent views from its summit, and the Pyramid looked formidable. There was a Colorado Mountain Club summit register on its summit (with only a few entries over the past 3 years). The register was placed in a glass container, which was loose next to the broken summit cairn. I spend a few minutes rebuilding the cairn and placing the register inside it. We descended northern slopes of Window Peak towards the window. The slope was steeper, but not exceeding class 2, and was covered with snow. I got my boots wet - got out my gators, but slightly too late.

There was a trail leading to the Window. I could not see where the trail originated - most likely from Opal Lake area, but the slopes were covered with snow. The window is a nice and an interesting feature, and I though it was worth to walk an extra few miles to see it. It was windy there and views were clear and spectacular. We followed a trail towards the Pyramid, but we lost it. Maybe it was covered by snow, and maybe it was not there.

We moved around the eastern base of the Rio Grande Pyramid and ascended east slopes. I have not seen any trail or cairns, but the route was not hard, just to we had to deal with a lot of unpleasant scree and rocks. The slopes were steep, but I don't think it exceeded class 2. We made a slow progress by zigzagging a few meters to the left, then a few meters to the right, and always moving slightly up. I had to help Duchess over a few bigger boulders. And soon, the summit came into the view. Duchess passed out into  a patch of snow, she closed her eyes and I was afraid that I would have to carry her down. I did not find any register on the summit, only a summit cairn. Again, the views were spectacular in all directions. It was a cold and clear day. Another summit, another fine day...

Our descend was uneventful. The ice and snow on the trail melted, but the sun was drying it quickly. We saw deer, elk, ptarmigan, picas, and bear footprints. We heard coyotes (at least me, Duchess appears to be deaf). And although our original trip did not work out, we found an equivalent substitute. Duchess made it on her own to our campsite and spent the afternoon sleeping. Mt. Oso will have to wait, perhaps next year...

I call this trip muddy because of unfortunate event and me getting muddy at the start of this trip. My pants were covered with dry mud, and I felt like a little girl who fell into a muddy pond. I still remember the horrified eyes of my mom when she saw her little girl that dirty. I think I was five years old.

Your title photo caught my eye since it looked just like a certain view of Aconcagua from northern side - very barren as well as pyramidal. As a fellow Aco summiteer would you agree? Slight difference in scale of course...
That is not to say Pyramide is small - I am very impressed at Dutchess climbing such a high mountain - 4200m unless I am mistaken.
I was pretty pleased to have got my nearly 10 year old golden retriever up a 1000m mountain a few weeks back! Like Dutchess he had to have a nap on the top.
best wishes, Mark

Thank you Mark, Duchess has a lot of summits. I think she would make it up Aconcagua. Altitude does not seem to bother her, now it is her age...

All dogs live forever, in one form or another.

Cheer's to finding ourselves, Liba!

hiking with your dog

I enjoyed your trip report. I hiked (day hikes) alone with my dog for many years and always worried what I would do if she sustained an injury. Carry her down, go for help, certainly not leave the dog. How do you handle this issue and what would you do? Thanks. Charles Baxter slowbutsteady

Re: hiking with your dog

Hi Charles, I carry a big backpack, and would probably put her in... Although, we are slowing down and I don't think we will do many more long trips. Thank you for visiting.

Altitude sickness kept me from hiking up there last September. I was just way too ill to go up there after setting up camp. All I could do was rest and be nauseous. One in our party did make the attempt, but a thunderstorm chased him down.

Thanks, it is a lovely area. I am sorry that you got sick.

You had me at the first sentence.

Thanks for the lovely comment.... i guess no need to read more. Haha