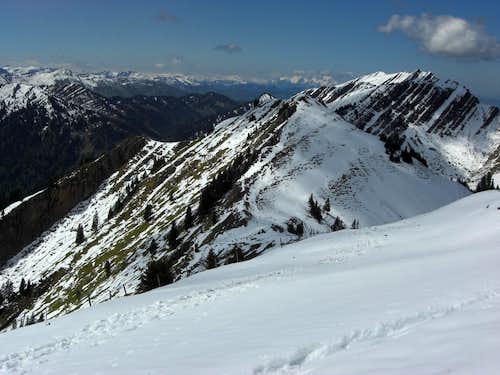 View from Stuiben summit to the west

The main ridge is a well defined ridge, geographically and geologically clearly separated from the rest of the Allgäu Alps. It culminates at Hochgrat summit, the highest summit of the whole area.

North of it is located a minor ridge (north ridge) with less high summits, the highest of those being Himmeleck and Immenstädter Horn.

The southern subgroup is also called Hörnergruppe because many of the summits have the suffix “Horn”. The surrounding villages are called “Hörnerdörfer” and a famous ski tour of the region is consequently called “Allgäuer Hörnertour” as most or nearly most of those Hörner can be bagged during this long and nice traverse. 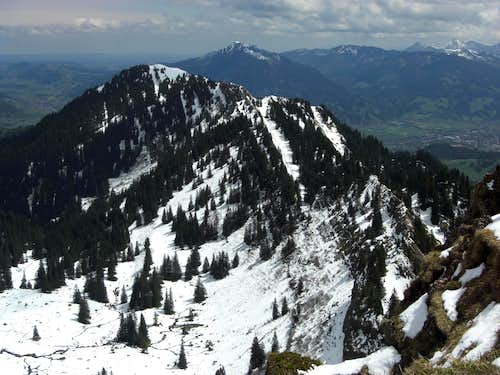 View from Stuiben summit to the east

This small, interesting and beautiful area is bordered to the south by the Gunzesried and Bolgenach valley, to the west by the Hittisau valley, to the north by the valleys of Weißach and Konstanzer Ach creeks and to the east by the Iller valley.

Oberstaufen to the north, Immenstadt and Sonthofen to the east, Balderschwang to the south and Hittisau to the west are the main valley villages of the area.

Thus the main part of Nagelfluhkette and Hörnergruppe is located in Germany / Bavaria, whereas the westernmost part of the area belongs to Austria / Vorarlberg.

The highest summit of Nagelfluhkette is Hochgrat (1834 m; 6017 ft). This summit is located in the middle of the 16 km long, east – west running main ridge. The main ridge has many rock outcrops and therefor has a rather dominant aspect despite of the minor height of the summits, compared to Allgäu Alps main summits. 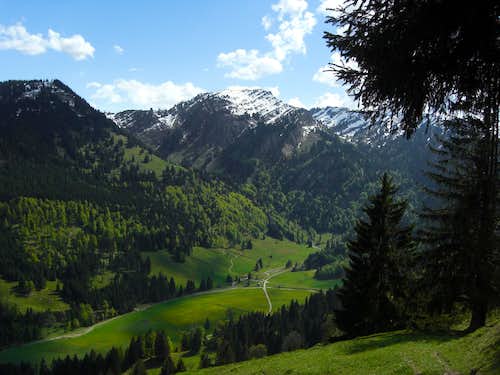 The town of Kempten is the entry point to Allgäu Alps.

Use the highway A 7 to Kempten, when coming from north, east or west.

Follow the short highway A 980 and road number B 19 to Immenstadt and Sonthofen.

Northern approach:
Use road number B 308 from Immenstadt to Oberstaufen. To reach Hittisau in Austria, take the road ST 2005 and Austrian road number 205 to the village.

Southern approach:
Use road number OA 27 to the villages of Gunzesried. You can proceed into the valley south of Nagelfluhkette by following Talstraße road to Gunzesried Säge. From there take the toll road Autalweg further into that valley.

Immenstadt, Sonthofen and Oberstaufen do have railway stations. 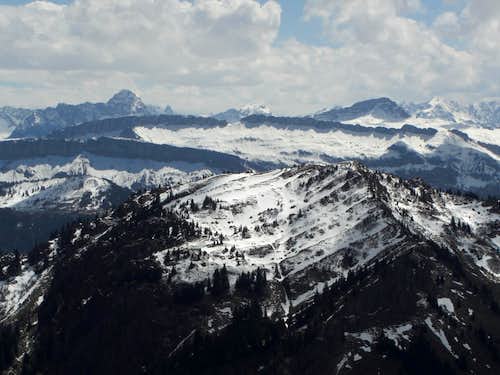 Nevertheless there are regulations which should be followed and which are indicated at several locations with a variety of restrictions. These are mainly seasonal blocked or regulated access to defined areas. You find these areas on the Alpenverein map, indicated in the "Maps & Guid Books" section below.

These regulations are mainly for the protection of wildlife and wildflowers.

Please respect them, stay on the trails and marked routes or keep out of blocked areas (mainly in winter). 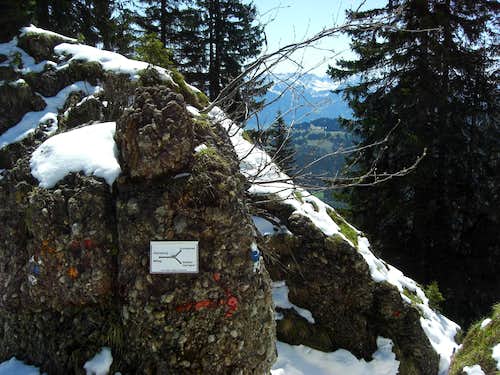 Nagelfluh (molasse conglomerate) rocks at a col of the main ridge

Nagelfluhkette is a geological interesting area as the rock outcrops are among the youngest deposits involved in the Alpine orogeny. 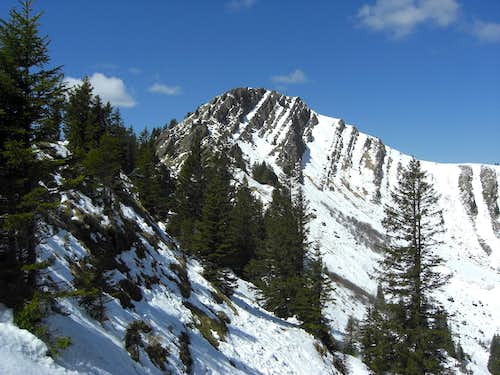 At the very end of Alpine orogeny this part of the sedimentary basin was involved in orogenetic processes, folded and lifted up. The upper molasses sediments were consequently eroded and the nowadays Nagelfluhkette appeared through the ages.

The not so solid silt- and sandstone layers were easier eroded than the more solid conglomerates. As the whole area was folded up steeply, in some parts nearly perpendicular, the harder conglomerates build nowadays impressive rock faces, rock ridges and huge southward dipping ledges.

The following towns and villages offer a great variety of accommodation:

There are many mountain huts in this area, most of them offer food and drinks for tourists. I will point out only those who are located around the main ridge and offer overnight stays, too.