Fill in the Blanks Game

There's a lot of ?s on this page at the moment where I haven't been able to find information. If you can help me out please add any info under 'corrections/addition' or PM me. Thanks. 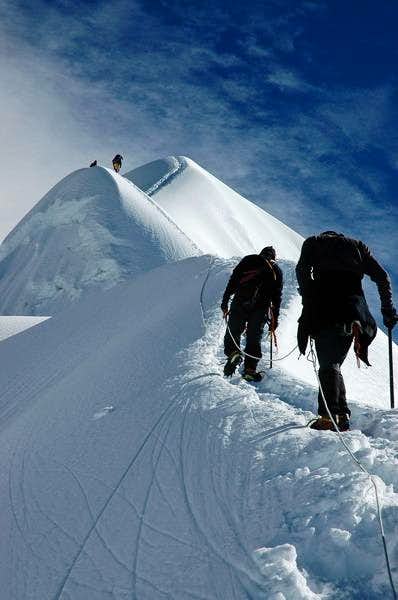 At the final ridge of Imja Tse SE normal route

The next step up beyond hiking is to tackle one of the 18 mountains designated as trekking peaks. The category was created by the Nepal Mountaineering association as an intermediate stage between hiking and all-out mountaineering. They are often close to major peaks, with astounding views from their summits. Climbing them gives you the exhilaration of pitting yourself against Himalayan conditions and altitudes. It is essential to note that these are still considerable mountains, taller than almost anything in North America or Europe. Don’t be fooled by the name ‘trekking peak’ - most classic routes require a little scrambling over snow and ice so make sure you are familiar with the use of crampons and ice axes. The peaks also have plenty of potential for more experienced Alpinists looking for tougher challenges. The north face of Cholatse for example is a serious undertaking not to be taken lightly.

Regulations pertaining to trekking peaks are relatively simple. A permit is required which is issued by the Nepal Mountaineering Association on payment of the royalty fee. This fee depends on whether the peak is in group A or group B. Group B consists of the original 18 trekking peaks and Group A consisits of a further 15 trekking peaks introduced in 2002, some of which shouldn't really be called trekking peaks because they require a solid base of mountaining skills. Cholatse for example was downgraded from full expediton status. The permit simply allows you to climb the mountain and other bureaucracies such as perchase of trekking permits are still applicable.

Fee structure for group "A" NMA peaks
Royalty for up to seven members: US $ 500
Royalty for each additional member up to 12 persons: US $ 100

Note : Maximum number of members in one team is 12

The Nepal Mountaineering Association have produced a small booklet containing the regulations governing the ascent of trekking peaks. There are certain requirements governing trekking peaks, such as the need for a registered sirdar and for a recognized agency to get your peak permit.

An amount of $250 must be deposited with NMA as garbage deposit to get a permit. This is refunded on the basis of a satisfactory report jointly signed by the concerned team leader, sirdar and climber.

One advantage of Nepal is that mountaineering gear is readily available in Kathmandu - but not as cheaply as it used to be! The Maoist troubles are a possible deterrent to climbing in Nepal. However in general the vital importance of tourism to Nepal is well-understood, and mountaineers are not interfered with, although there have also been a few stories of money being demanded or cameras taken. The situation varies from month to month so try to get up-to-date information before you go.

Listed peaks are graded using the Alpine Grade system. The overall seriousness of the complete route based on all factors of the final approach, ascent, and descent—including length, altitude, danger, commitment, and technical difficulty. This system originated with UIAA Roman numerals; it is now generally seen with French letters and is increasingly being used worldwide. Grades described below are for the 'classic' route ascent lines. Alternative routes will obviously be of a higher grade.

The original 'B' group trekking peaks are rated no more than Alpine grade AD. Many of the easier peaks also have harder routes that are not listed here. Some of the newly introduced 'A' group peaks are technically harder and are comparable in grade to many "expediton peaks"

I have divided peaks in to their relevant geographical areas and then listed them in order of height.

The UIAA - Mountaineering in the Greater Ranges

Thanks for that. The Jugal/Langtang thing has always confused me a bit as it appears to be virtually the same subrange. I'll make those changes you mention.

Great list, thank you for creating this page! Some comments: "one of the 18 mountains designated as trekking peaks" The number should be 33 (18+15), no? (But you have 35 peaks listed on the page. Also the NMA mentions Lobuche West 6145m as a trekking peak as well. I could never figure out the 'correct' number of peaks designated as trekking peaks myself, different sources list different peaks and numbers.) http://www.nepalmountaineering.org/climbingregulation.php -> http://www.nepalmountaineering.org/index.php?razer=climbingregulation (2 broken links) "Mardi Harmal" -> "Mardi Himal" Hiuchuli -> Hiunchuli (I think this is the more common spelling) Cherigo -> Chekijo (I think this is the more common spelling) "Chuli East" -> "Chulu East" Gokyo Peak should not be a child of this page, although it is a 'trekking' peak in the sense of the word, but does not require an NMA permit.

Kusum Kanguru is D, Paldor is AD/AD+ Some more info.

Coordinates (from Google Earth, crosschecked with map): 27°55'44"N 86°40'51"E Apparently, all pictures posted by SP member reybelo are from the first ascent in 2003. Here another picture of Parilapcha from the South.

Finally got around to making these changes. Let me know if any numbers still wrong. The original coordinates were off the Himalayan Index, which are not quite as accurate. Thanks.

Big Lee, Chhukung Ri is sometimes listed as a trekking peak, but apparently this is in error. Kyazo Ri 6186 meters is the actually peak that was supposed to be listed, but apparently someone goofed on the website (or so we were told). According to the National Park, you don't need a special permit for Chhukung Ri, in fact you can purchase a certificate for climbing it (we got one). If you click on the link for Chhukung Ri on the Nepal Mountaineering Association, it actually links Kyazo Ri.