Nevado del Tolima is one of the most beautiful volcanoes in Colombia. It is very symmetrical and reminds me of Cotopaxi or some of the other Ecuador volcanoes, though isn’t quite as glaciated as the highest ones there. It is also much less popular of a climb than the Ecuador volcanoes.

According to Volcano Discovery he last major eruption of the volcano took place around 3600 years ago, but there were several other smaller explosions in the 19th and 20th centuries, the last one which occurred in 1943.

One thing that makes the climb of Nevado del Tolima so beautiful and fascinating is that the main routes to the peak start at a low elevation and in the jungles before climbing up to glaciers. The peak is located in the Parque Nacional Natural Los Nevados and due to the diversity is probably one of the most scenic climbs that I have done. It is also the second highest peak in the National Park, after El Nevado del Ruiz.

Parque Nacional Natural Los Nevados boasts high mountains and beautiful scenery. There are many high altitude lakes, deep gorges, rainforest, glaciers, hot springs, and many waterfalls. The southern end of the park, and especially the area around Nevado del Tolima is the most spectacular of all. Thick jungles cover the lower slopes of the mountains, and there are steep valleys, raging rivers, waterfalls, some large glaciers, and the perfectly symmetrical cone of Tolima itself.

As with any moderately high mountains, acclimatization is important. This is especially true on if you enter the park and Nevado Tolima from the north. It is too easy to get too high too fast on these volcanoes, and this is a serious concern. If climbing any of these peaks, you should plan on spending at least a few days between 3000-4000 meters/10,000-13,000 feet before attempting to climb to the summit.

Colombia has gotten much safer in recent years and now is probably one of the safer countries in South America. The mountains of Colombia are well worth visiting.

Of the glaciated mountains in Colombia, Nevado del Tolima is perhaps the second most popular glaciated peak, after El Nevado del Ruiz, though Ritacuba Blanco might be about as popular. 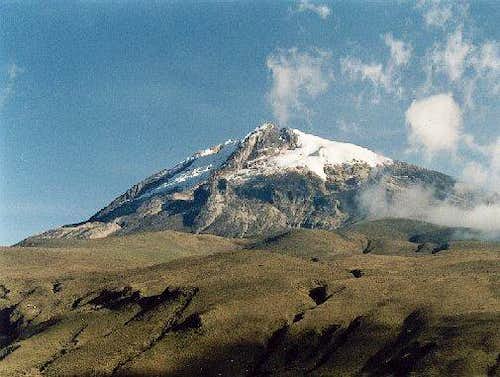 Nevado del Tolima from the road to Juntas.

Nevado Tolima is most easily accessed from the south, and this is where the normal routes begin.

Most climbers will start the approach to the trailhead in Bogotá. From Bogotá, you must travel to Ibague. Ibague can be reached by bus or plane from Bogotá. We took the Pullman bus, for about $7 a person in 1998-1999, but it's probably more now.

From there, the only transport to El Silencio is the milk truck (lechero). It currently leaves La Juntas in the morning (check locally for the exact time as it sometimes changes) costs $2-3. Most south side routes start at El Silencio.

Note: No matter if you take public transport, or hire a vehicle, make sure to check out the incredibly impressive gorge on the left side of the road between Las Juntas and El Silencio. This is one of the most incredible gorges I've seen in the world, so don't miss it!

EDIT: As of December 2021, I was told that the route from El Silencio has been closed due to some dangerous spots on the steeper sections.

Apparently the route from Salento is now the standard route.  A second route starts at Juntas, but it may be different than the old route through El Silencio?

Also, I have been told that a guide is now required to climb the peaks in Los Nevados (we climbed Nevado Tolima in December 1998 without a guide), so be aware of that.  I'd suggest checking Explore Share for a list of guides. 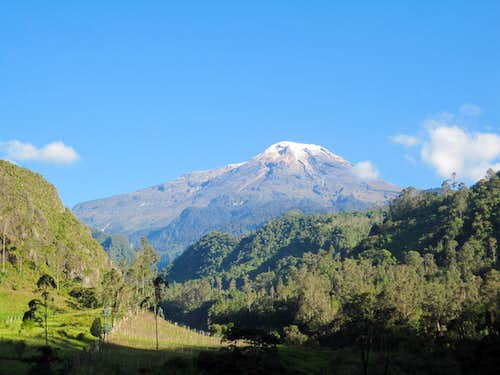 Nevado Tolima from the south and above Ibague.

If you are making a traverse of the range, Nevado Tolima can also be approached from the north and from the area around Nevado del Ruiz.

Park entry is an additional $10 (this may have gone up) and there was a small fee to bathe in the hot springs in El Secreta.

Tall rainforest trees on the trail near El Rancho. One of the things that makes this climb so facinating is that you start in the jungle and end up in the glaciers!

As mentioned, the normal routes to Nevado del Tolima climb from the south. 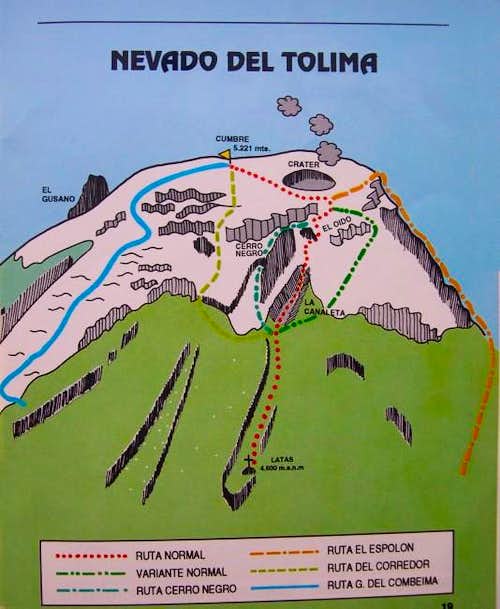 This diagram shows the Normal Route and some other routes to the summit.

This is the most direct route to the summit, but it may be dangerous in recent years as the glacier has receded and rockfall danger has increased dramatically in La Canaleta. There were several house sized boulders rolling down this route throughout the night, so we didn't use this route.

This is the recommended route up Nevado Tolima from Las Latas and is the route we climbed. As mentioned, La Caneleta has become very dangerous since the glacier has receded. As an added bonus, the route descibed on this page also avoids most of the crevassed areas.

Nevado Tolima from Camp II at Las Latas. Cerro Negro is the rocky peak to the left and the icefall of Tolima in the center of the photo.

There are many other available routes on the mountain, but I have not climbed them. SP member Engendradodelayuca has added two route pages (in Spanish).

See also the really nice diagram below for a detailed route diagram of the south side routes:

A permit is supposed to be required for all climbs and treks in the national park. We did have to pay a fee to enter the north end of the park, but no one ask for one in the south end (where Nevado Tolima is located), though we did sign in. This was in 1998-1999. More recently, it doesn't sound like a permit is rarely asked for.

You may want to check the following places for information: 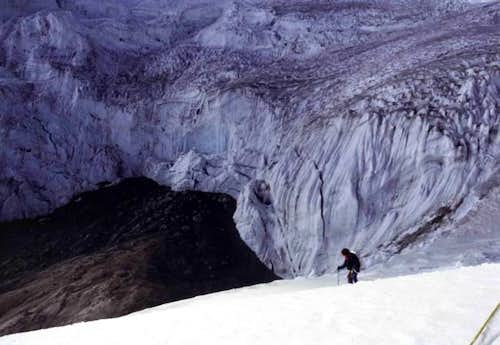 Glaciers on Nevado Tolima. Technically you are supposed to have a permit to climb the mountain, but it doesn't seem to be enforced and most people don't know about the requirement.

The best months for climbing or trekking are January and February. December and March can be good as well. Sometimes July and August can have good weather. The rest of the year is very wet. Even in the so called “dry” season, the area is very wet and storms and whiteouts are very common. This mountain area is known for bad weather, but at least it makes for many waterfalls and rainforest on the lower slopes, as well as glaciers at higher elevations. Go well prepared for bad weather at any time of year. 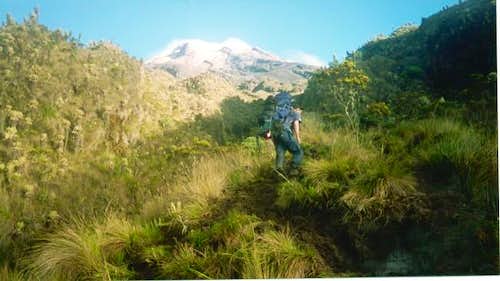 Nevado Tolima from just above Camp I at the end of December. Notice the strange "Paramo" vegetation.

Setting up Camp II on Nevado Tolima. Tolima summit is in the background.

There are many campsites on the mountain.

On the standard route, the most popular campsites are Las Cuevas at 3800 meters and Las Latas at 4520 meters elevation.

Because of high sulfur content, there can be a lack of good fresh water above Las Cuevas in the dry season. It may be a good idea to pack up water from below Las Cuevas up to Las Latas.