I camped at Glacier Lodge Sunday night. Monday morning, I hiked up the South Fork of Big Pine Creek. I was planning on taking the standard approach via Finger Lake to Norman Clyde Peak’s North-northeast ridge, but quickly decided to take the Willow Lake turnoff and travelled cross country to Norman Clyde Glacier on the west side of Norman Clyde Peak’s North-northeast Ridge. The cross country travel was relatively easy and sometimes well-cairned. When I got to the glacier and could see the cliffs below the north-northeast ridge, I asked myself why I decided to go this way. 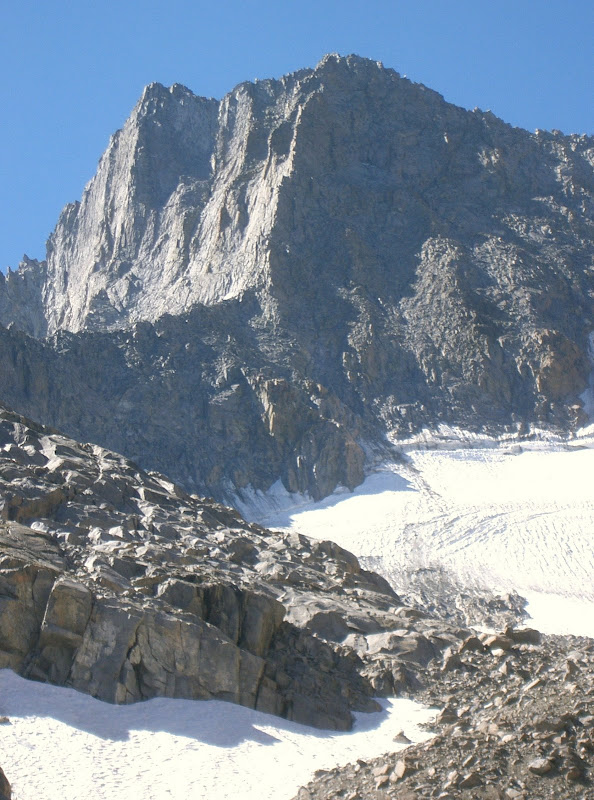 However, I found my way up to the crest of the north-northeast ridge north of the saddle without any technical climbing. I continued south along the crest, then traversed west onto the north face. I was expecting to see a lot of cairns, but didn’t, so continued up the face on continuous class 3 terrain. I then started seeing cairns everywhere. The overabundance of cairns made it difficult to decide which way to go since they seemed to be leading in different directions. I found myself on a small arête that required 5.easy climbing. 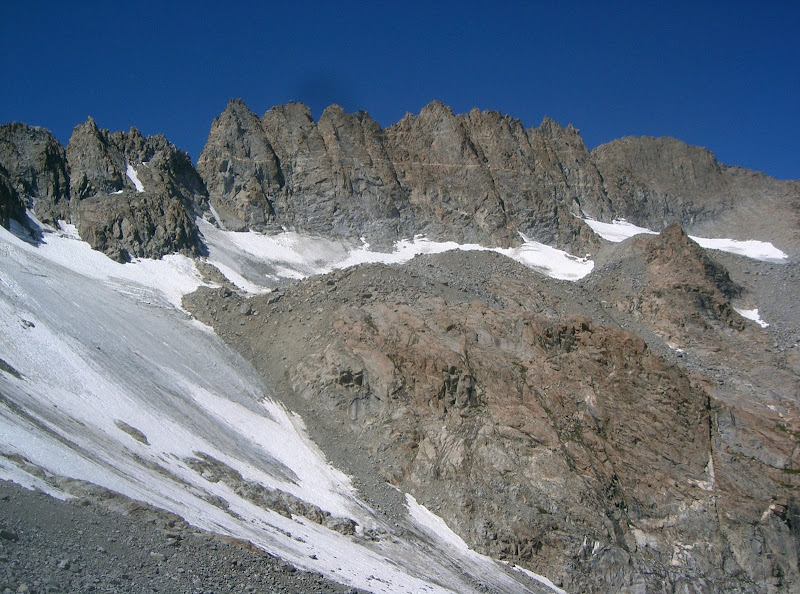 Not wanting to downclimb, I continued up and found an easy way to traverse east to what appeared to be the accepted route. Once on route, I moved up to the summit ridge and the summit. The views from the summit definitely rivaled those from Sill. I ate a PowerBar on top. I followed the ridge back to the top of the north face and descended what appeared to be the accepted route. I found a total of 9 rap stations. 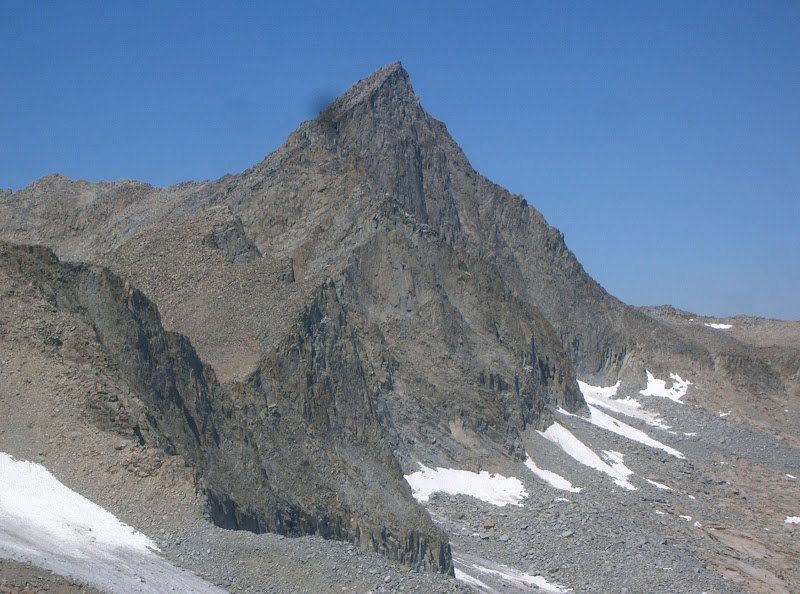 I was surprised to find so many rap stations on such an easy route, but figured that it was steep enough to possibly make rappelling more efficient than downclimbing. When I reached the north-northeast ridge, I had a hard time finding a safe way off of it because of the cliffs below. I finally found a 3rd class descent chute after some traversing. Then I had to descend a lot of talus to the unnamed lake above Finger Lake and finally to Finger Lake itself. I was not happy to learn that I had to ascend more to traverse along Finger Lake’s west side. 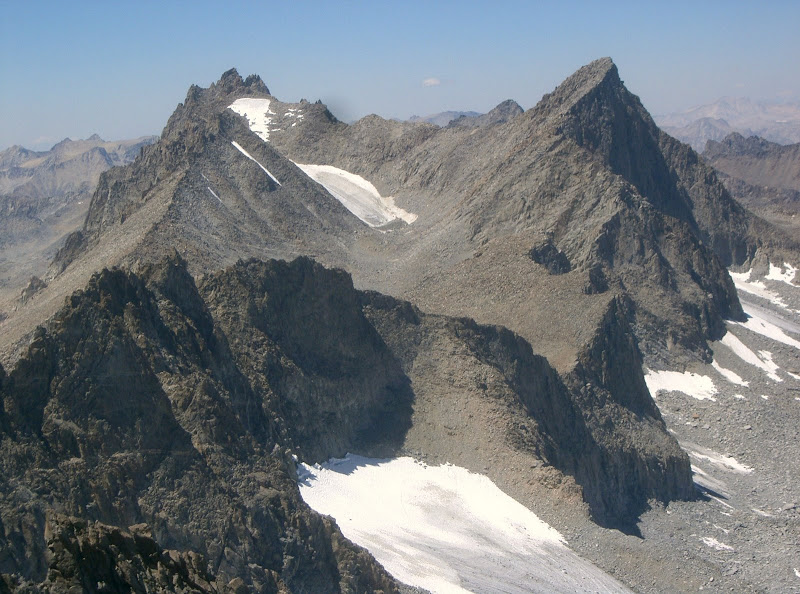 I finally traversed around Finger Lake and then descended the faint trail towards Brainerd Lake. Instead of descending all the way to Brainerd Lake, I continued cross country south to meet up with the trail. The trail felt long, but was easier than travelling cross country. I was hoping to get some food at Glacier Lodge, but it was closed, so I settled for some cheap food at Carroll’s Market in Big Pine. 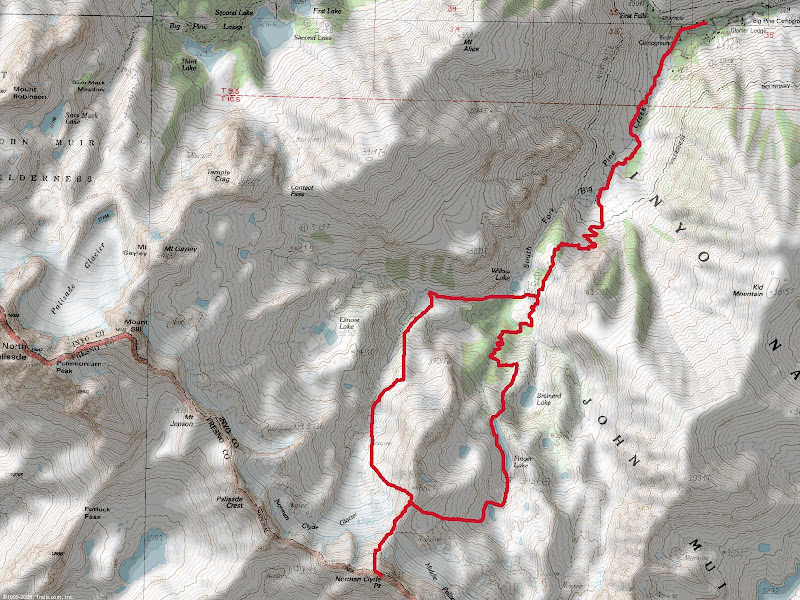 Nice trip report. Love your photos. Don't you hate cairns? That's why I kick 'em over every chance that I get.

Thanks. Cairns can be bothersome. I've knocked over a couple myself.