Northwest Ridge and Stanley-Miller Mine 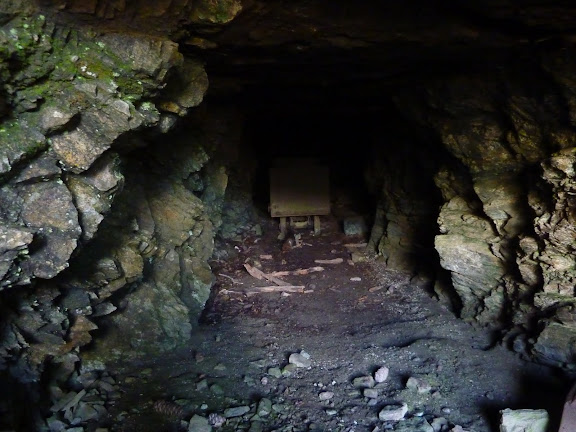 A modified way to Stanley-Miller, and this time we found the mine.


Last August, a bunch of us made the trek up the East Fork to Iron Fork in search of the elusive Stanley-Miller mine. The old "trail" that we followed up was pretty much a disastor waiting to happen, and while we found the cabin ruins and some artifacts, our delusional minds led us chasing ghosts as the actual mine location was nowhere near where we thought we saw it was.

Of course, I knew I had to go back. Now was the time.

That crappy way up was so bad that I actually didn't mine the idea of hiking up Iron and descending the NW ridge to Stanley-Miller. And who could resist a new cross-country exploration? Well I guess most could resist, as only two others opted for this last-minute proposal. And Mike only had time to summit Iron and turn around, so it was just Winston and I. Winston has previously hiked some brutal ones with me, including the last Stanley-Miller trek and the real (eastern) Yuciapa ridge, so I knew he'd be fine with whatever we had to encounter.

We took about 3.5 hrs to ascent up Iron, and it went by quickly as Mike and I were discussing science & religion. After a nice rest, we began the cross-country descent. First we descending the summit south as usual, and after about 5 minutes we hit the large buckthorn brush patch. Here we wanted to veer west...luckily the south side of the brush was trampled down and made it easy to cross.

The first part of the western ridge was relatively gentle and not too steep. There was a nice area for camping about 1/4 mile away from the south ridge. After that, the ridge got nice a rugged with lots of rock outcroppings which we scrambled over and on the sides of. 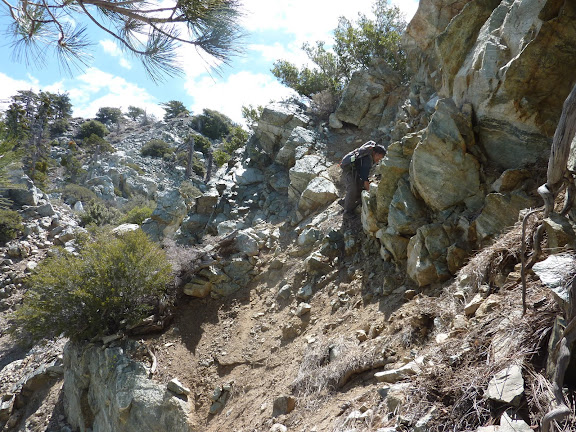 After this section we continued west. There seemed to be a decent use trail up to this point...At about 7200', the west ridge splits into SW and NW components, both of which have been hiked up before, with the SW likely more popular due to the shorter approach. We began our descent down the NW ridge. 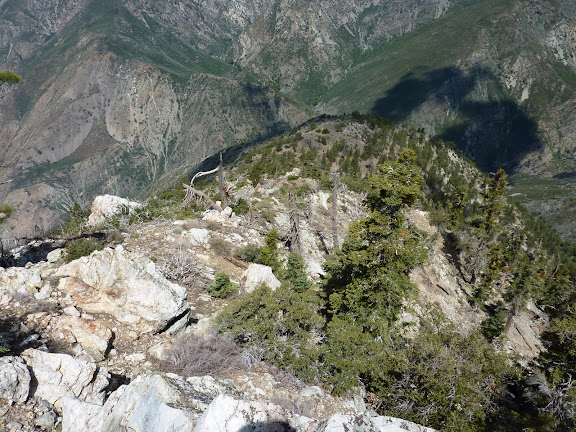 I thought the ridge was nice and rugged, but not too bad. Steep with lots of bouldering here and there and avoiding some brush, but not enough to really slow us down. We were making good progress, taking a little over and hour to descend the first 2000'.

Near 6000' there are couple of navigational issues along with the terrain changing into classic "brushland". The ridge has turned more northernly and splits into 2 spurs and you must veer off onto the NW spur although the N spur seems like the natural way to go. Soon after, at 5800', you must veer W to maintain the proper descent. At this point, the brush quickly thickened. It was somewhat annoying but not really that bad, as we could usually find an opening or two to continue switchbacking down.

We also were about 10' away from this guy. He was not happy 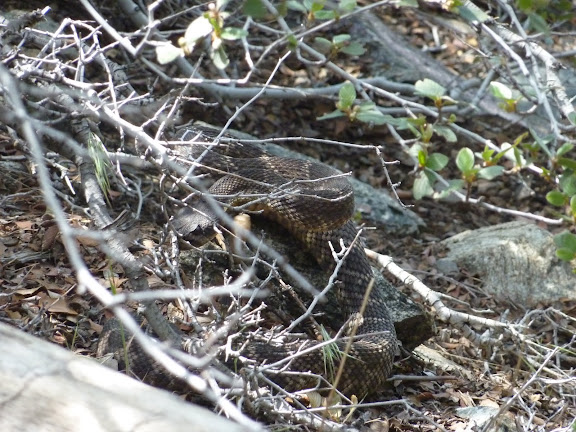 watch out for the rattlers from Zé Apelido on Vimeo.

At about 5200' there is a benchmark. This signals another route change; we had to turn from heading W to again heading NW. Now we were heading down the ridge that eventually ends up right by the cabin ruins 1000' below. At 4800' we crossed a huge pipe, maybe 8" in diameter. Hmm, I wonder what that could be leading to...The pipe headed more westerly than our NW direction. It's path seemed covered in brush so we continued our descent NW while knowing eventually we would have to head south to meet up with this pipe (and hopefully the mine) again. 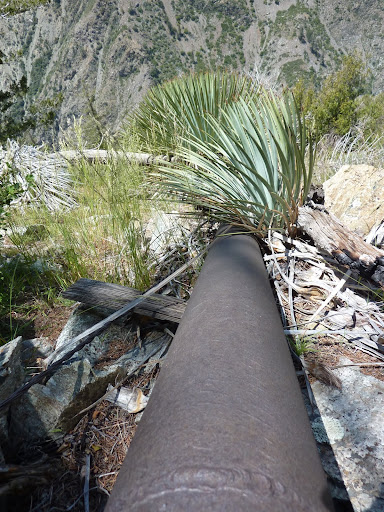 Descending to the elevation 4000', we traversed south in search of the mine. It took us a bit of time, as initially we travsered about 100 yds and did not see anything so we sat down and studied the map and how far the mine should be. We decided it must be further south (and obviously the pipe was too). I climbed backed up a few 100 ft while Winston traversed across, and when I found the pipe Winston found the pipe, and a bunch of ruins! 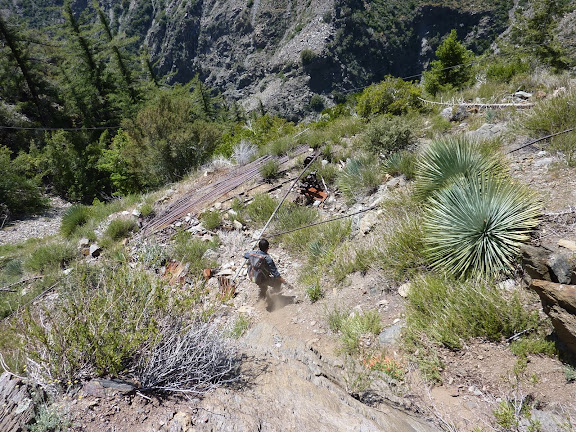 There was a bunch of terraced platforms with equipment. Lots of old machinery. 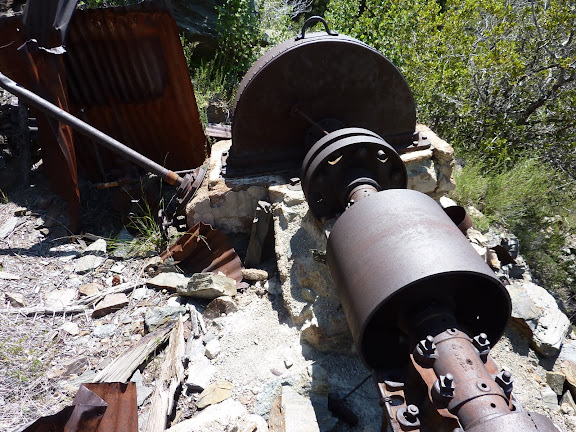 But the mine wasn't here. We looked around a bit further, and finally found the mine just south of the machinery. Finally!

After passing the ore cart near the entrance, the mine splits into two. You can see the railway on the ground that goes out and over to the machinery. 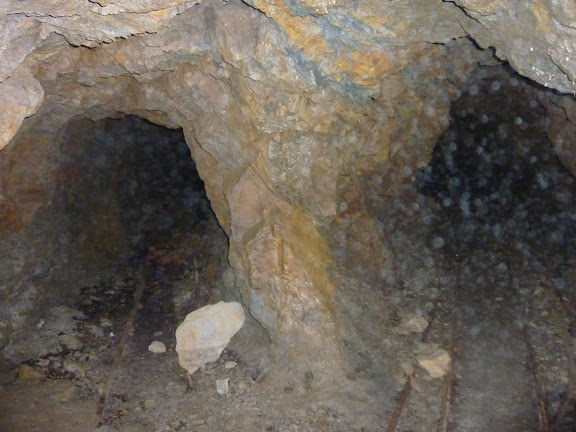 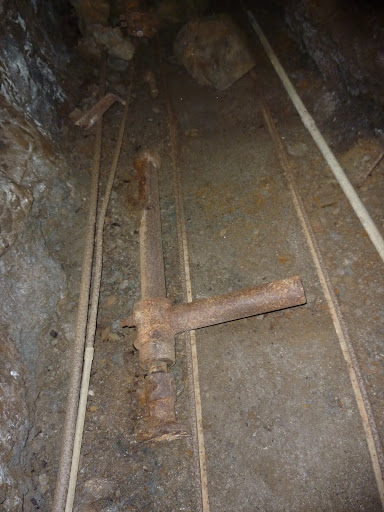 The two shafts continue back and eventually connect back up into a loop. There are various small spurs, one or two with vertical or "oblique" shafts. 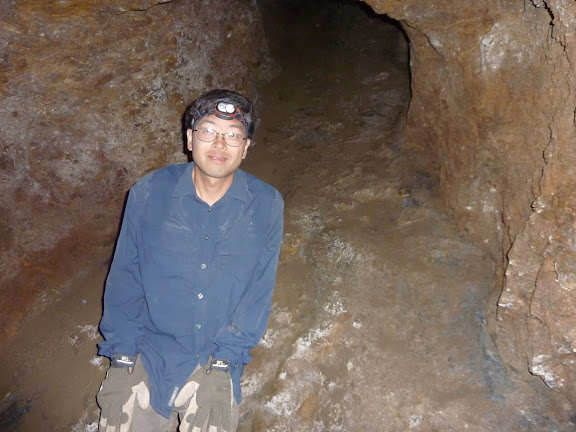 Really cool stuff. This mine was damper than the others - you could see water droplets forming on the ceiling, and the air was misty, although I'm not sure if that was from moisture or also rock debris.

After checking out the mine, we were ready to get off the mountain. We descended down, this time generally following the gully south of the gully we had ascended last time. It was a relatively better, but that's not saying much. It was better in that there were no "if this rock breaks I'm going to be a crash test dummy" moves, so yeah...Ascent to Stanley-Miller mine is just a pain no matter what.

Getting near the Narrows, I was hoping the water level wouldn't be too high to cause that much of a problem. My "backup" plan was to follow the old "Wetwater" trail. Then I saw it - literally carved out of a cliff, and preferred to take our chances in the water.

We had about 6 crossings in the Narrows section, a few of which got up to our waists. The current was decently strong in some spots, but it was negotiable. Here's one pic I got of a shallower crossing: 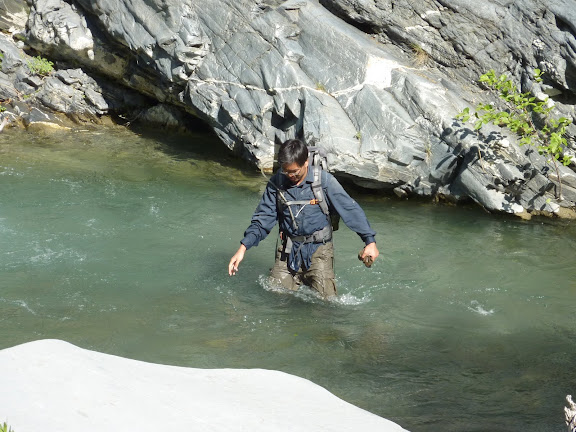 After reaching the bridge, we were homefree. What an adventure. This hike had a bunch of great things, peak-bagging, cross country travel, rock bouldering, mine exploration, and water crossings. And not many flies.