Overview: Mother of all Hikes

According to John Robinson, author of Trails of the Angeles, "8007 foot Iron Mountain is by far the least accessible peak in the San Gabriels....No trail approaches its isolated summit , and to climb it you must start miles away and thousands of feet below." In this local hiking legend's view, "Big Iron" is the most strenuous one-summit hike in the entire San Gabriel range.

Originally, local miners in San Gabriel Canyon referred to the mountain as Sheep Mountain, descriptive of the herds of Bighorn sheep that once roamed its slopes. However, the U.S. Geological Survey, which mapped the San Gabriel Mountains in the 1890's, was apparently not as impressed with the fauna that roamed the surface of the mountain as it was with what lay beneath the surface, iron ore deposits. Thus the present name was bestowed. But the Bighorn were not entirely forgotten for the designated wilderness area where Big Iron is located is named "Sheep Mountain Wilderness."

Notwithstanding the daunting stats given above for the standard trail and south ridge route, this is actually the easiest of the routes. Three other approaches are much harder: (1) traversing the San Antonio Ridge from Mt. Baldy; (2) going up the East Fork and Fish Fork of the San Gabriel River followed by a bushwhack and steep climb (including some Class 3) up a northern ridge to the summit; and (3) ascending the southwest ridge from Allison Mine with sustained Class 3 climbing.

The three routes from the north, east and west, are only for the very experienced, well-prepared and extremely fit hiker. 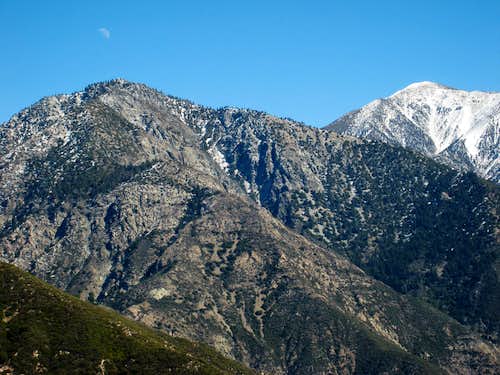 From Interstate 210, take the Azusa Avenue (SR 39) exit and go north winding up San Gabriel Canyon about 12 miles to where the East Fork Bridge intersects SR 39. Turn right and go across the bridge. In about 5 miles, you will come to a point where the road starts to curve very sharply right and uphill. Before the curve, you will see a two way road straight ahead of you signed "Not a through street". Drive straight onto the right hand lane of this road and in less than a mile you will come to the large paved parking lot at the end of the road overlooking the East Fork of the San Gabriel River. Park here. 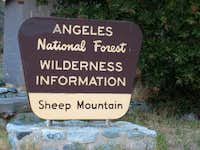 Sign as you enter East Fork/Heaton Flat Trailhead area
From the trailhead parking area, go past the large gate and hike north and east on the road that follows above the river bank for about ½ mile. There, by a smelly outhouse, the Heaton Flat Trail (designated 8W16) begins on your right.

The trail heads generally northeast and winds its way to the top of the ridge. It then continues over several small bumps until the very top of the trail is reached at Allison Saddle (4,582' elev.) about 3.5 miles from the start. From here, head north up Iron's south ridge along a rough, use trail where yucca tends to hug the sides. 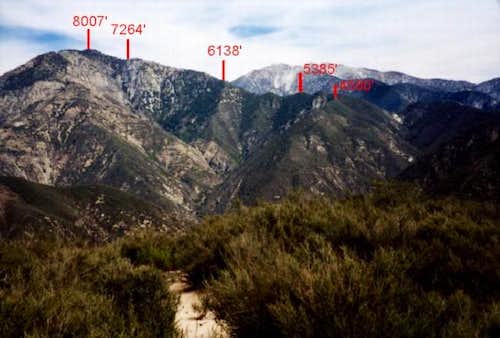 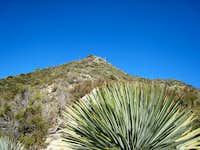 One of the bumps on the south ridge


From the ridge, there are great views to be had of Mt. Baldy to the east and of Mt. Baden-Powell to the northwest.


The last mile involves 2,000 feet of gain but steady persistence will get you to the summit. 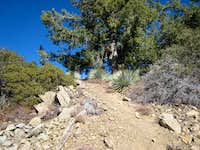 A permit is required to hike the Heaton Flat Trail. Self issue permits are available at the trailhead. Permits can also be secured at the San Gabriel River Ranger District, 110 N. Wabash, Glendora, telephone 626.335-1251, or from the United States Forest Service Entrance Station on SR 39.

An Adventure Pass is required to park at this trailhead. These passes can be purchased at most sporting good stores in Southern California. The cost is $5 per day or $30 for a yearly pass. 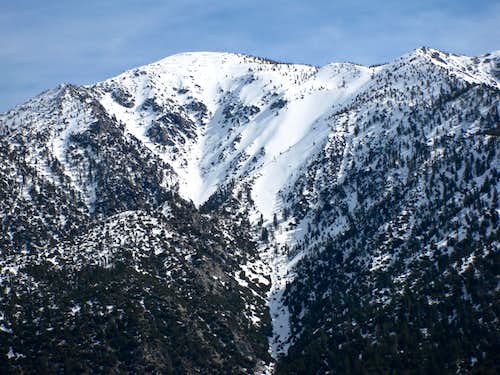 The peak is accessible year round. However, most of the Heaton Flat Trail/South Ridge route is extremely exposed to the sun so you should avoid this route during the summer unless you want a real suffer-fest. If you insist on a late spring or summer hike, pack at least 6 liters of water. There is no water source along the trail/ridge route. You can stash some at Allison Saddle and pick it up on the way back.

On the other hand, snow visits the mountain and the route during the winter. Check weather forecasts and, if there is snow, take appropriate clothing and footwear.

Heaton Campground is located at the bottom of Heaton Trail right above the East Fork of the San Gabriel River. It is free. Apart from that, although there are no developed campsites along the Heaton Flat Trail, there are apparently no prohibitions against camping further up the trail and ridge, providing you have your permit and observe fire restrictions.

You can also opt to travel up-river along the East Fork and camp along the river.

Trekking poles may be very useful on the descent, particularly on the extremely steep first mile of the ridge coming off the summit.

Again, there is no water source along the Heaton Flat Trail/South Ridge route. Bring 3-4 liters minimum on the coolest of days.

TR of ski descent of a north face couloir

Thanks alot. here I am, just adopting a page and there's a not from six monthes ago on how to make it better. thanks again.
-Steve

You can make your URLs into links which will allow people to simply click on them instead of having to cut and paste. To do so, simply edit the section, and place the following HTML tags on either side:
&lta href=//www.someurl.com/blah/blah&gtA description</a>

Thanks alot. here I am, just adopting a page and there's a not from six monthes ago on how to make it better. thanks again.
-Steve

THERE IS ABSOLUTELY NO WATER SOURCE along this hike. You would need to pack enough water for a full day of strenuous hiking.

This is noted in the "Additional Information" section.

A set of poles is a good idea for the decent. I used mine on the decent and feel I saved myself some considerable time on the steep descent from the summit to the saddle.

Agree that, for most, poles are highly recommended.

A quick addition: you can self-permit at the East Fork trail head. No need to order them in advance.

Justin. Thanks for that info. I will put it in the page. Augie

I climbed the North Ridge on 9/22/14, and after you leave the stream at the bottom, there was way more bushwacking up-hill than I realized I was taking on. It took me 9 hours to climb to the top, and September was the wrong time of year to have to wear pants and a sweatshirt to not get torn to pieces. The South side down was very easy though, with a clear trail the entire way.

Yes. I climbed via the north ridge a few years before your trip. As I recall, we got up in about 6-7 hours, but it certainly is a bushwhack.

OK, just read the route page. (did not include the additional gain on descent). It seems that you're allowing 600 ft. for the intermediate ups-downs while I thought it may be closer to 400 ft. 6800 ft. are the numbers I come up with RT.

I used previous estimates such as that of the Sierra Club. Haven't ever attempted to gauge it myself. Thanks for the input.