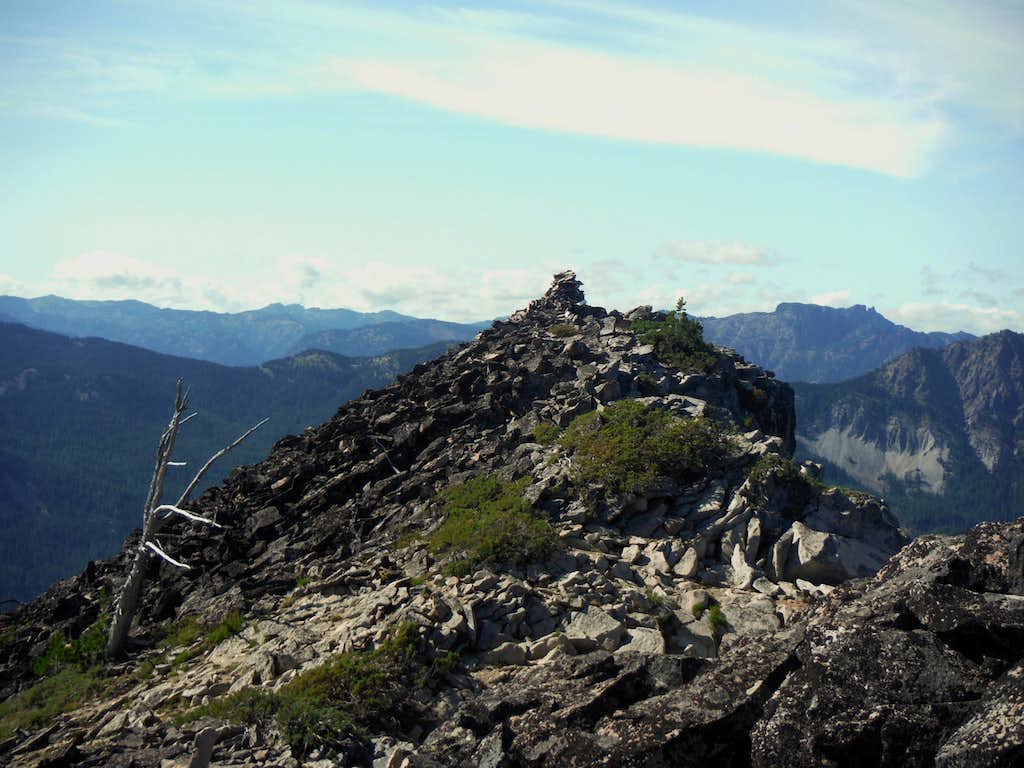 The true summit
Old Scab Mountain is not the most popular mountain to obtain in the South Cascades but in many ways this is a wonderful hidden gem in the Cascades. This summit often gets overshadowed by nearby Goat Peak and Mount Aix but this mountain is a wonderful summit in the Naches Ranger District. At over 6600 feet and 968 of prominence Old Scab truely stand out in its general area. There is no trail to the summit which maybe the reason many don't come. The easiest way to the summit requires a steep off-trail bushwhack-scramble to the ridge. CascadeCohen and were lucky to run into a bootpath that went part of the way up and a cairn route to the eastern ridgeline. This route though may not be there in the future.

The views from this summit on a clear day are simply breathtaking. The good thing is that this peak is east of the crest which tends to be the drier side. This means that there will be less clouds and fog to block the views. As for summit that can be viewed from this peaks Mount Aix is to the southeast, towering Mount Rainier to the east and distant Mount Stuart can be seen to the north. This though is just a very small sample of the mountains that can be seen from this summit. It should also be noted that you have completely unobstructed views from the summit. There is a little exposure up top from cliff that borders the summit to the north. This makes the view from Old Scab Mountain even more dramatic. Though this peak tends to be overlook this peak is a real gem to all who summit it. 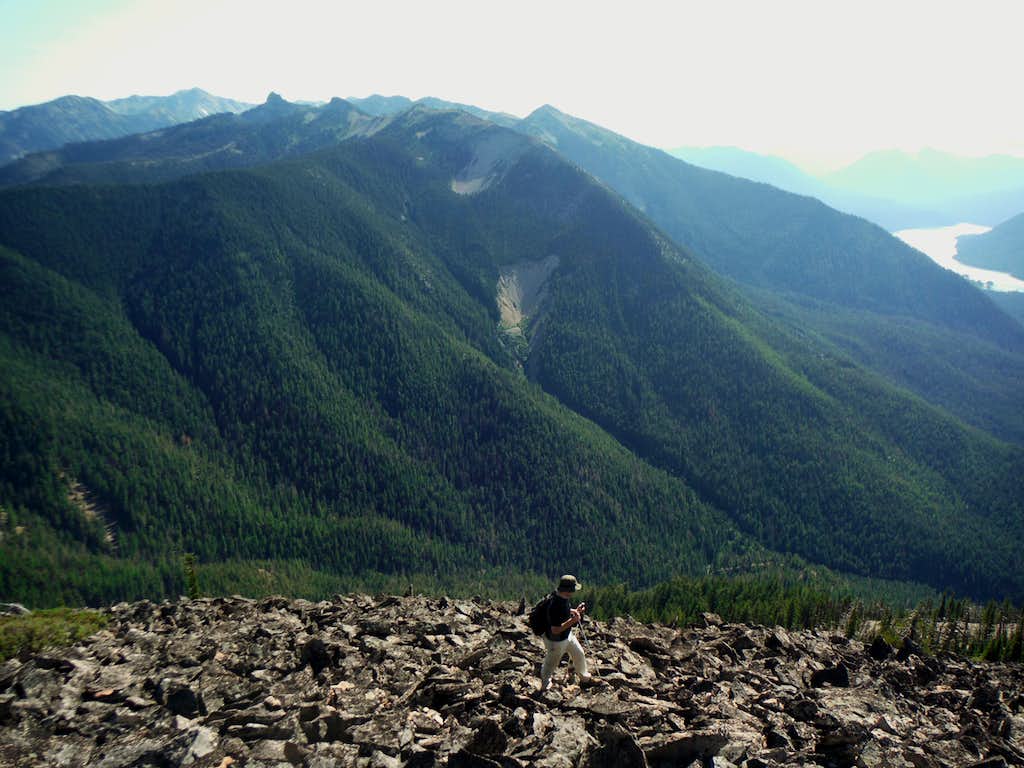 VIA THE SOUTH ROUTE:

4 MILES ROUNDTRIP
1400 ELEVATION GAIN/LOSS
Take the Soda Spring Trail north out of the parking area roughly a mile as it will descend roughly 300 feet from the trailhead. That will bring you near the base of Old Scab Mountain of your left hand side from there find the best off trail route up the mountain. My experience is that going north to grabbing the eastern ridge is the easiest way up but others have just gone directly up. This require a steep bushwhack but if you are lucky the slopes tend to be open. Once on the eastern side of the ridge traversed either the ridge or just below the ridge across a large amount of steep angled talus to the summit. This is Class 2 and lightly exposed. 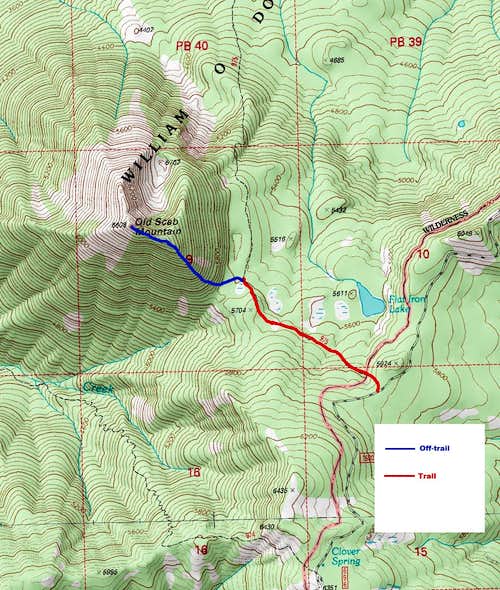 10 MILES ROUNDTRIP
3700 FEET OF ELEVATION GAIN/LOSS
This is the longer way to get to the summit of Old Scab Mountain but it is the accessible way to the summit. You can often get here much early in the season and the road is in much better condition. Once over the cool looking footbridge from the Soda Creek Campground make a right. In a couple hundred feet you will hit a Y intersection with the trail on the left going uphill and another to the right following the creek. Take the left and head uphill. (this is in disagreement with the topographic map but so is most of the trail up to Old Scab. Continue up the trail up to intersection with the other Soda Creek trail roughly 1.2 miles in. Stay on the trail as it changes grades from steep to gradual to even at times descending all the to the flat section near the base of the finally summit area to Old Scab Mountain. From there head right early and try to ascend up to the northern tip of the eastern ridge. There is a bootpath in one part and various cairns to guide as you are heading up is you get lucky and find the route. This route up is steep to the ridgeline but moderates once follow this eastern ridge to the base of the ridge traverse. Once on the eastern side of the ridge traversed either the ridge or just below the ridge across a large amount of steep angled talus to the summit. This is Class 2 and lightly exposed. 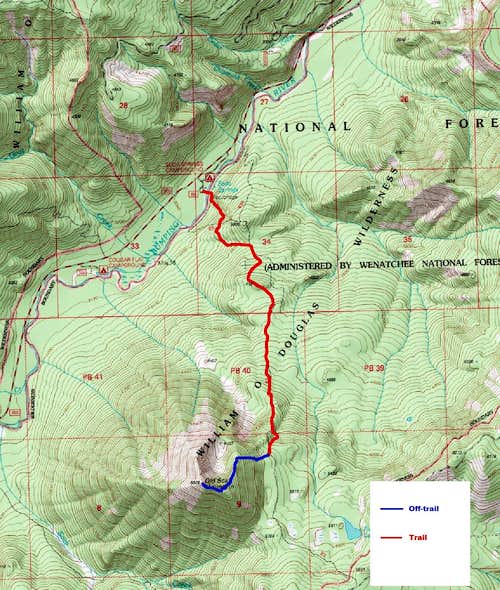 The Soda Springs Campground charges a $5 day use fee. They have a self pay station at the entrance to the campground.  Your Northwest Forest Pass is not valid there.

This mountain can be potentially hiked year round though keep an on how low Route 410 is closed in winter. The ideal time to summit this peak is anywhere from June to November. October would be the best month due to the fact that the Western Larches to fire across many of the neighboring summits in the region. The south route is often closed until June and closes again by October.