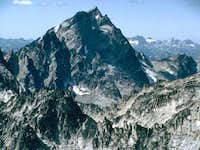 Mount Stuart from the east. Photo by rfbolton

"Without a rival as the crown peak in the central Cascades of Washington, Mount Stuart has been pronounced the single greatest mass of exposed granite in the United States...its northern and eastern faces are the alpine climax of the Wenatchee Mountains. They make a powerful impact on first sight...The mountaineering problems are magnified by the mountain's massive dimensions and its complexity." Excerpted from "Cascade Alpine Guide - Climbing and High Routes - Columbia River to Stevens Pass, Second Edition" by Fred Beckey.

Mount Stuart from the west. Photo by jfletche

Mt. Stuart is the second highest non-volcano in the Cascade Range, exceeded only by Bonanza Peak, which is also in Chelan County north of Stuart. Captain George B. McClellan named Mount Stuart in 1853 after his best friend, Jimmie Stuart. Who made the first ascent of the mountain is uncertain. A stick with the inscription "Angus McPherson --- 1873" was reportedly found on the summit. A. H. Sylvester certainly climbed the peak in both 1897 and 1899. He believed that the first ascent was probably made by Richard U. Goode and Frank Tweedy in about 1885 or 1890. The north and south aspects of Mount Stuart are quite different in topography, appearance, and difficulty of ascent. The south side of the mountain is without glaciers or permanent snow and cut by numerous couloirs several of which lead without technical difficulty to the summit. 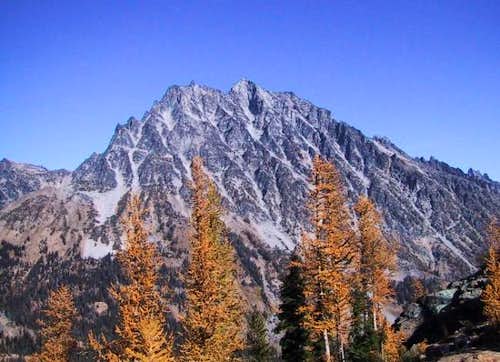 Mount Stuart from the south. Late season. Photo by Dean 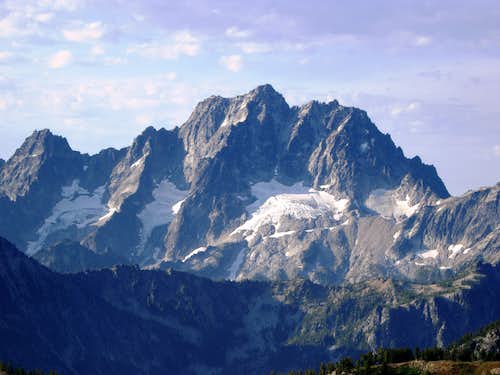 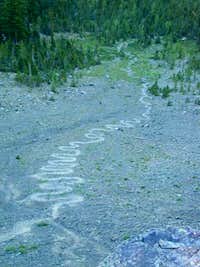 Southern Approach From Interstate 90 reach State Route 970 from either Cle Elum (directly) or Ellensburg (via US 97). State Route 970 can also be reached via US 97 from the north. From State Route 970 take the Teanaway River Road. Follow "North Fork Teanaway" signs for 23 miles to the road-end at the trailhead parking lot. Cle Elum District trails: Cle Elum Trails (Ingalls Way # 1390 & Longs Pass # 1229) Northern Approach Drive to Leavenworth on Highway 2, then turn south on Icicle Creek Road. Drive approximately 10 miles to the turnoff for Bridge Creek Campground and the Stuart Lake Trailhead. Cross the bridge then drive the gravel road up to the trailhead. Wenatchee River District trails: Wenatchee River District Trails

Please note, this is only a listing of the most popular and commonly climbed routes. It is not intended to be comprehensive in content or detail. See "Cascade Alpine Guide - Climbing and High Routes - Columbia River to Stevens Pass, Third Edition" by Fred Beckey for a complete listing of routes and / or the route pages here for details. Also, numerous other guidebooks describe many of the routes.

Cascadian Couloir: Class 2 & 3 when snow free. Cascadian Couloir has become the standard route from the south and is probably the most climbed route on the peak. It is also the standard descent route from the mountain. There is some class 2 & 3 scrambling between the false and true summits when snow free. In the early season, this section includes some steep snow and is normally heavily corniced. Ulrich's Couloir: Class 2 & 3 when snow free. Ulrich's is the first major couloir to the west of Cascadian. It tops out between the false and true summits and is steeper than Cascadian. Beckey reports that Ulrich's is best done as an early season climb when still snow filled since it is loose and thus not recommended later in the season.

West Ridge: Grade II, 5.4 This is probably the second most popular technical route on Mount Stuart. Even though it has a reputation in many circles of being a fairly easy climb, the route is long and complicated with many opportunities to get off route onto more difficult terrain. While a strong experience party can complete the route in one day car to car from the Teanaway Trailhead, it is not uncommon for parties to have route finding problems and bivouac on the route or descent

Sherpa Glacier: Grade II, snow to 40 degrees. Sherpa Glacier offers a good early season moderately steep (about 40 degrees) route on the north side of Mount Stuart. This is the best descent route (in early season) back to camp in the basin at its base and is commonly used after climbs of Ice Cliff Glacier.

Ice Cliff Glacier: Grade II to III (depending on conditions) with snow and / or ice to 55 degrees and quite possibly a cornice to overcome at the top. The lower part of the route is on Ice Cliff Glacier and can involve large crevasses and / or ice cliffs depending on the season. The upper part of the route ascends the obvious steep Ice Cliff Glacier Couloir above the glacier. Exiting the couloir can be the crux of the climb if large cornices are present. The route tops out near the top of Cascadian Couloir. Moderately steep snow and / or scrambling leads to the summit from here. North Ridge: Grade III to IV, 5.4 to 5.9 depending on the variation taken and pitches climbed. Not only is this route listed in Fifty Classic Climbs Of North America but unlike many that are included – it actually belongs there. The climbing is on excellent granite in fine exposed positions no matter which of the many variations are taken. Some nice photos and approach information included on the SP page. See a guidebook for route details.

The major variations are: The Upper North Ridge, Grade III 5.4 by the line of least resistance, or 5.7 staying on the crest of the ridge. The Complete North Ridge, Grade IV, 5.8+. Variations of the West Side called "hard class 5 by Beckey, or the East Side rated 5.8. The Great Gendarme can be climbed directly at 5.9 or bypassed.

Stuart Glacier Couloir Grade III Class 5 + with snow and / or ice to 60 degrees. The route ascends the obvious main couloir above Stuart Glacier. Most of the route is 40 to 50 degrees. The crux is a very narrow section of the couloir about half way up that frequently involves about 100 feet of water ice up to 60 degrees. The route tops out at or near the small notch on the West Ridge Route. The exit rocks are low class 5 on the normal finish and about 5.7 on the left side variation. There is additional low class 5 climbing on the West Ridge to the summit.

Hi, I'm not sure how/whether you want to incorporate this, but just saw it go out on the Washington Alpine Club listserve: Girth Pillar via Sherpa Glacier Posted by: Joe Sambataro This route offers the full meal deal: technical ice, exposed steep climbing on a big mountain, and lets not forget, a technical glacier decent (especially when done in the dark). We bivied in the scree between the Sherpa and Ice Cliff Glacier, woke at 3:30am and headed up the Ice Cliff. Kyle climbed in his approach shoes and aluminum crampons with an axe while I carried a light tool with my leathers and steel crampons to lead the ice step on climbers left of the ice fall. We didn~Rt carry screws, but I recommend a couple screws depending on your comfort level, and when I come to think about it, for v-threads if you have to bail. I led the step with both the axe and tool, then dropped both down to Kyle and built a rock anchor on the adjacent rock wall. A dirty gulley of snow led to the approach pitches. I took the first block, 3 approach pitches of 5.6-5.8 steps and the first pitch on Girth Pillar. The bottom of the crack was a bit wet so I climbed up the corner 15~R before making a wide step left into a sweet 5.10 crack to a small ledge. I set up the haul line for the pack but this was a major slow down~WI don~Rt recommend hauling on an 8.1mm rope with a tibloc~WI shredded my sheath quite a bit to retire my third rope. Kyle led from here, including a cruxy finger traverse at 10+. For the third pitch, Kyle took the obvious line up the center of the pillar, which offered over 100~R of solid hand jams. At a white sling, you have an option to cut left into the original 11c, but this is where the left half of the pillar collapsed in the 90s. After a short OW, easier simul climbing led to the false summit. Here is where we messed up: the descent. If we got it right the first time, we would have saved 4+ hours and likely gotten back to the car on day 2. However, we misread the beta and traversed on the south side all the way to the base of Sherpa Peak before regaining valuable feet lost to descend the gulley at the far (climbers) right. After 1,500~R of downclimbing 40 degree snow, we found a rap station over the schrund at dark. I~Rll spare you the details, but we zigzagged left and right in a moonless night before finding our way down to our bivy by 3am. Like the guidebook says, stay to the climbers right and downclimb slabs and snow to a short rap. Avoid the gulley and climbers left. We hiked out the next morning and drove to Mazama. Gear: 1 axe/tool each, double rack to 2~T, 1 #3, 8.1mm haul line and a 60m single. (5.11, 9 pitches, Grade 5)