Out of the Ashes - A New Pine Ridge Emerges 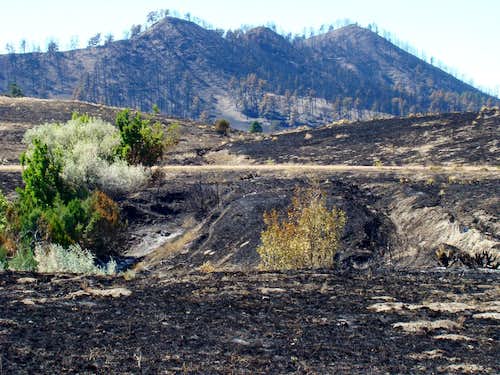 Wright Peak after the 2012 fire

Fortunately for Nebraska’s Pine Ridge region, the “three strikes and you are out” rule does not apply. Major forest fires in 1989, 2006 and 2012 devastated the forests and meadows of the region, drastically changing the landscape for a long time to come. If these major fires were not enough, there were numerous smaller fires in intervening years. Pine Ridge District Ranger Tim Buskirk reported that 90% of the woodlands in forest service lands in western Nebraska have been lost. The area residents knew before will never be the same again during their lifetimes. 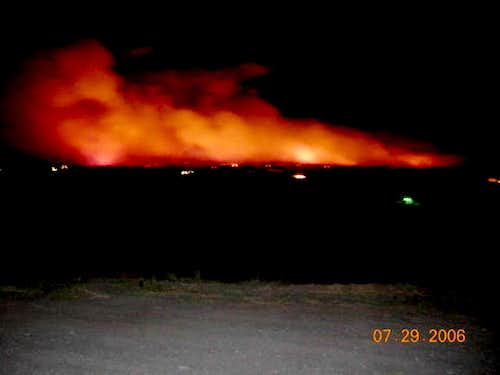 The 1989 Fort Robinson Fires took out close to 50,000 acres. The “Dawes and Sioux County Complex” fires of 2006 destroyed 68,000 acres. The 2012 fires were even more destructive, burning over 86,000 acres. The 2012 fires amazed even many of the firefighters with the aggressive characteristics of the fire behavior. Much of that was due to days of extreme heat, very dry conditions and high winds on the day the fires started. The steep and rugged terrain of the region greatly compounded firefighters’ effort to bring the fires under control. Unlike most previous fires, numerous homes and structures were also lost in 2012.

Hikers and climbers who used the trails and summits of the Pine Ridge suddenly found almost nowhere to go in the region. Most public lands in the area had to be closed for extended periods of time. And just when cleanup efforts were really starting to make progress, Winter Storm Atlas struck in 2013, knocking down thousands more trees. At Fort Robinson State Park, trees downed by Winter Storm Atlas were a catalyst for improvements in their trails, complete with much-needed trail signs.

Though it has taken several years for trails to be restored to normal, off-trail hiking remains seriously impacted because of the tangle of dead trees to wade through, as well as the danger of “snags”, or trees ready to topple onto unsuspecting hikers. Because of the enormity of the cleanup needed, this situation is not likely to change in the near future.

Now That the Smoke Has Cleared 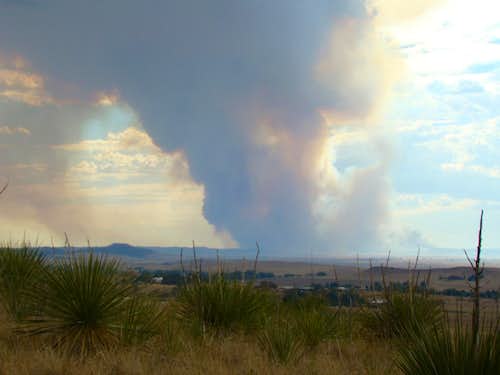 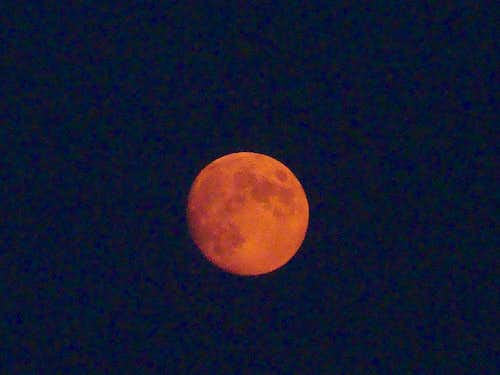 Mars or a Smoky Moon?

Twenty-five years ago, thick forests were everywhere in the Pine Ridge. Today the living trees are more often found in pockets or islands among the stands of dead trees. The magnitude of the destruction coupled with the degree of difficulty of removing dead trees from these remote, steep and rugged areas have made cleanup a very expensive and time-consuming effort for state and federal agencies. Many private landowners have done little to clean up their properties because of the expense. Government agencies have offered landowners financial assistance for the cleanup. But the response has been limited and the efforts continue to slowly move on.

Because the forests were allowed to grow so thick for so many years, even the burned areas still present risks for additional fires. The areas of healthy trees still left in the forests are of great concern to forest management officials. These trees can provide seedlings for forest regeneration. But, all the fire damage has amplified the concern to thin even the healthy forest areas in order to minimize the impact of future fires that are almost certain to happen in this dry region. 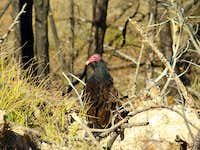 A vulture in a burn area 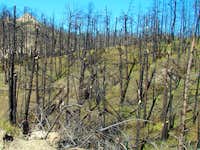 Ranger Buskirk correctly pointed out that more than 100 years ago, forests in the Pine Ridge region were controlled by nature. Studies demonstrated that the density of trees then was about 24 per acre. Historical photos of the Pine Ridge displayed in area museums would back up what the studies show.

The major burns of recent years are symptoms of forest management that allowed forests to reach the level where they developed unnatural fuel loads, allowing fires of a magnitude that never occurred in the centuries before the arrival of modern civilization.

Forest management now hopes to return things closer to what they were long ago, when naturally-occurring fires periodically cleaned up the forest floors and thinned excess small growth while mostly leaving intact the mature and developed trees. Firefighters like to point out that too much vegetation on the forest floors create what they call “ladder fuels”, which allow fires to literally climb the trees, destroying them in the process. Keeping that vegetation to a minimum helps to prevent those ladder fires. Naturally-thinned forests have proven to be healthier forests, with not nearly the extent of pine beetle devastation that has been so prevalent in western USA forests the last 20 years.

The photos below show what two major Pine Ridge summits looked like before the fires and how they look now. 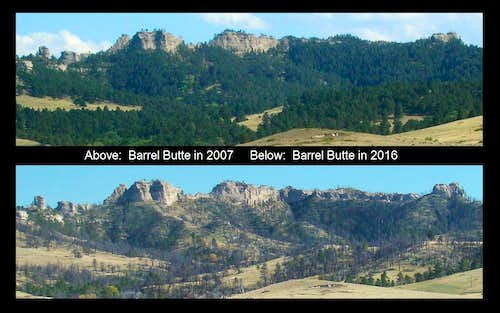 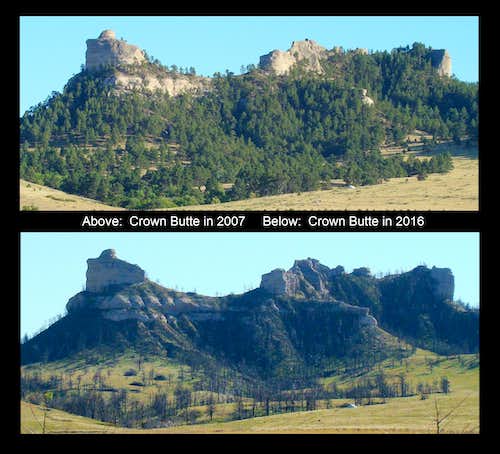 Fortunately, not everything in the Pine Ridge region looks like the grim photos in this article. Fort Robinson and Chadron State Park have been the sites of great restoration efforts and both are well worth extended visits. The Gilbert-Baker Wildlife Area largely escaped all the major fires and Soldier Creek Wilderness is seeing serious re-forestation after the 1989 Fort Robinson-Soldier Creek fires. Toadstool Geologic Park also escaped the brunt of the fires, due to its lack of vegetation so characteristic of badlands areas.

Challenges for the Future 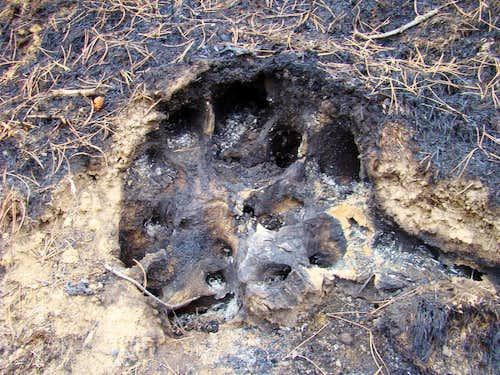 Obviously, things will never look like they did before all the major fires in the Pine Ridge – at least not in our lifetimes anyway. But perhaps they never should be allowed to go back to that again. Mankind does not have a good track record with trying to circumvent the cycles of nature.

If the forest management goal is to return things back to a more natural order, then cleaning up the mess that has been left behind is imperative. Dense stands of dead trees and dense stands of living trees both need to be thinned. In large areas totally devoid of tree growth, plans are already in place for at least some trees to be re-introduced. This is also seen by some experts as a chance to introduce other trees into the ecosystem. All this is easier said than done given the large geographic areas in need, the difficulty of the terrain and the great expense involved.

In 2015, the forest service announced they would be planting 40,000 trees as part of a 10-year renewal plan. In other areas, forest thinning is being done – especially near populated areas. The views of large stands of dead trees and the headache of cleaning up snags on trails and roads will likely sustain the motivation to keep moving forward with needed changes. Like everything in life, change is ever-present. The question is will the change be pro-active or not?

I especially enjoy the before/after photos you put together. Well done!

Thanks for your kind remarks. It was stressful to see the fire aftermath in these areas I used to enjoy exploring, but I'm looking forward to the seeing the land heal.

Nature can be more resilent than you'd expect. I just returned from Gran Canaria, where I had last been in 2011. In the summer of 2007 they had huge fires and the canary pine forests were severely burned. All the fallen dry needles and (huge) cones served as accelerators so that large areas had turned from green to black and brown. The trees, however, remained widely intact, thanks to their bark which (similarly to the one of the California sequoias) quenched the fire.

Four years later those trees were still black with patches of green needles at the end of the branches or the top of the trees. Now in 2016/17 you wouldn't even tell the difference between a burnt and a healthy tree. The former might be a bit black around its trunk.