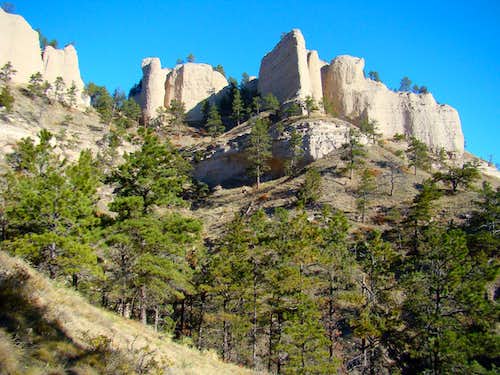 One of the Red Cloud Buttes

Nebraska's Pine Ridge area is an escarpment on the edge of the high plains. It's about 100 miles long across Nebraska, running through northern portions of Sioux, Dawes, and Sheridan counties. The Pine Ridge also extends into South Dakota's Pine Ridge Reservation, and to a lesser degree the north side of Wyoming's Niobrara River watershed. Though the Pine Ridge looks like a narrow arc on the map, it's distance across varies anywhere from 4 miles to 20 miles. Despite it's rugged natural beauty and great hiking opportunities, the whole area is often overlooked due to the close proximity of the Rockies to the west in Wyoming, and the Black Hills to the north in South Dakota. The similarities between Nebraska's Pine Ridge and Nebraska's Wildcat Hills is striking. However, the Pine Ridge is significantly larger and has much more area open to the public. 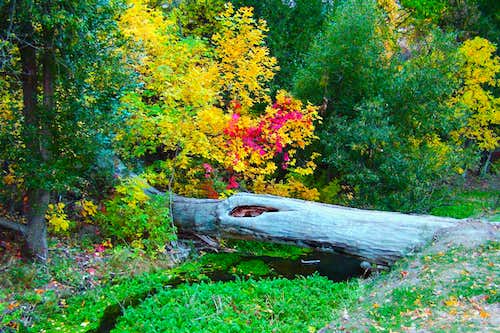 The Pine Ridge is characterized by several hundred square miles of forests, meadows, steep buttes, small canyons, minor peaks, and numerous small streams. The altitude ranges from around 3,000 feet in Sheridan County to over 5,200 feet in Sioux County, providing excellent ground for ponderosa pine, ash and cottonwood trees in the forest, and even occasional groves of aspen. There is an abundance of wildlife in the area, with large numbers of deer and wild turkeys. There are also elk, bighorn sheep, pronghorn antelope, coyotes, foxes, raccoons, porcupines, occasional mountain lions, ducks, wild geese, and pheasants. Note: Major forest fires swept through the Pine Ridge region in 2006 and again in 2012, burning many thousands of acres of not only forest but meadow lands as well. Further damage to the forests occurred in 2013 when Winter Storm Atlas struck, knocking down many trees. It took forest service and state park workers a long time to clean up the trails in the region. Off-trail hiking has been greatly affected by this, and there are still falling tree dangers in some areas. If you are planning any off-trail hiking, you might want to consider checking for advisories from the agency that administers the area you are going into. Contact information is available elsewhere on this page. 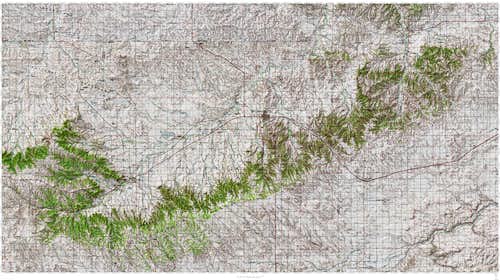 Topographical map of the Pine Ridge region is courtesy of BubbaMaps

There are a large number of hiking opportunities in the Pine Ridge region, due to over 100,000 acres of public access on state and federal lands. Some of the larger areas open to the public would include the Soldier Creek Wilderness Area, Chadron State Park, Fort Robinson State Park, Ponderosa Wildlife Management Area, Bighorn Wildlife Management Area, Bordeaux Creek Wildlife Management Area, Gilbert Baker Wildlife Management Area, Metcalf Wildlife Management Area, Chadron Creek Wildlife Management Area, Toadstool Geologic Park, and the Nebraska National Forest Recreation Area. There are many miles of hiking trails in the Pine Ridge. The length and quality of those trails varies, depending on the agency that is in charge of development and upkeep. And, if there are not enough hiking trails, there are many more miles of old logging roads throughout the region. The national forest service offices provide free vehicle use maps for the region. These maps show many of those little-used roads. While some of the best buttes and small peaks to climb are on private property, others are on public lands. Those would include Cheyenne Buttes, Walter Reed Butte, Flannigan Butte, Crown Butte, Barrel Butte, Roundtop Peak, Eagle Eye Rock, Pine Butte, Wright Peak, Lover's Leap Butte, Rock Butte, Steamboat Butte, Aristocrat Peak, Red Cloud Buttes, and Saddle Rock. Besides your necessary topo maps, the best general trails map one can get, is from the National Forest Service office in Chadron. The state of Nebraska posts an interactive trails map for the state. You can access this map by clicking here: Nebraska Interactive Trails Map 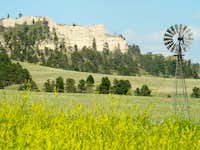 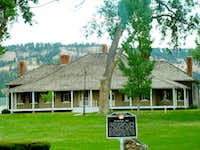 While Nebraska's panhandle region provides great hiking and climbing, it also has some places of historical interest. A fur trading post was established on Bordeaux Creek in 1839, not far from the present-day location of Chadron. The post has been restored into The Museum of the Fur Trade. That post continued in operation until 1872. Further west, the landmark Crow Butte was the sight of a famous battle between the Crow and Sioux tribes in 1849. Fort Robinson was established in 1874, and became the place where the famous Sioux chief, Crazy Horse was killed in 1877. Two years later, Cheyenne chief Dull Knife led the famous Cheyenne Outbreak. In 1885, the legendary Buffalo Soldiers made Fort Robinson their home, until 1898. 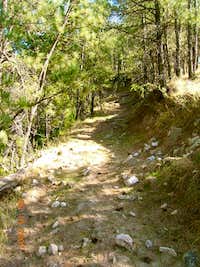 The primary east-west highway along and through the Pine Ridge, is Highway 20. Highway 385 also serves to bring the most north-south traffic through the area. However, other highways into the Pine Ridge include 2/71, 27 and 87 from the north and south. Highway 29 also comes into the Pine Ridge from the south. The map to the left displays roadways to Pine Ridge area summits, canyons, state parks and wilderness areas. The topographical map in the second section above gives more precise summit access details. 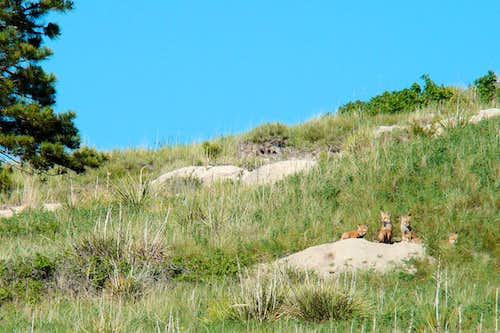 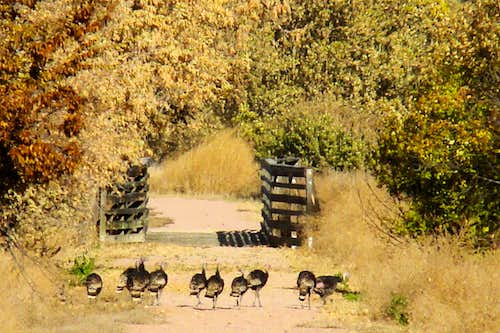 There is quite a bit of private land among all the public land tracts. So, obtaining permission from landowners for hiking or climbing on private property is essential. The friendly folks at the Nebraska National Forest Service are very helpful in providing contact information for private land, as well as information on the public lands they administer. Also, the folks at the Ponderosa Wildlife Management (WMA) Area are very helpful in providing information on all area WMA's. The WMA regulations at each area are posted there. If your choice is state park hiking or climbing, you will find assistance at their offices. The state parks require permits, and they will have posted some regulations of their own. Carrying firearms (not concealed) is permissible in all but the state parks. But, if you carry a weapon that is usable for a hunting season in progress, you could face a hefty fine if you do not have a permit for that season. Some hikers and climbers prefer not to venture into hunting areas in-season. For more information on Nebraska hunting seasons, check out these links: 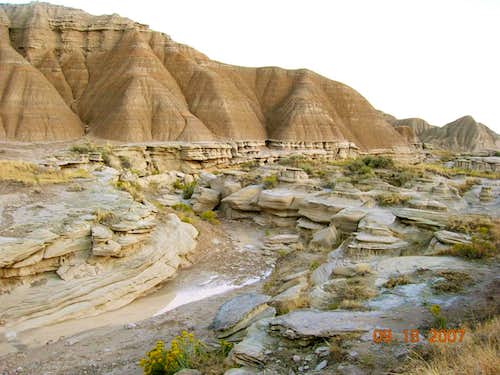 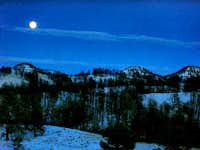 Moonrise over the Pine Ridge

There are several camping areas in the region, but the best are at Fort Robinson State Park and Chadron State Park. If you contact the chambers of commerce at Chadron, Crawford, or Gordon, you can get more specific and up-to-date information on area camping, or lodging if you prefer. 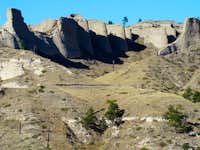 Because people tend to think of Nebraska as being all flat and treeless, some might not take seriously some of the risks in venturing into some of western Nebraska's more remote and rugged areas. This would be especially true if one is hiking or climbing alone. One of the beauties of the area is that it is not over-run with people. But, that also means if a solitary hiker or climber is injured, they cannot count on others coming by to rescue them. Cell phone coverage among all the steep buttes and canyons is very weak, and often non-existent, and traffic through those areas is sparse. One cannot count on others being around to rescue them. 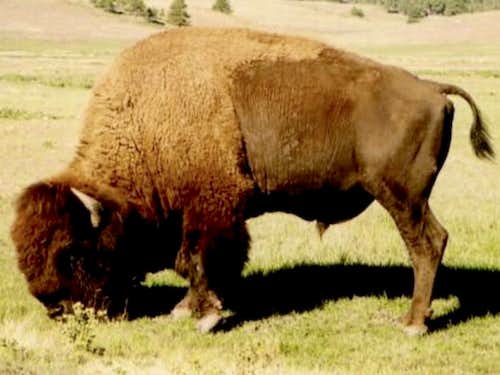 Not a creature to trifle with!

Ticks are perhaps the most frequent living danger. They are abundant from early March through August, and they carry Lyme disease, Rocky Mountain Fever, and possibly other diseases. Rattlesnakes are occasionally seen along trails and on rock ledges. Packs of coyotes do live in the area and, there is an increasing mountain lion population, with game biologists reporting at least 22 cougars residing in the Pine Ridge as of early 2013. There have been unconfirmed sightings of wolves in the Pine Ridge, and one stray bear from the Wyoming Rockies was shot near Harrison in 2008. 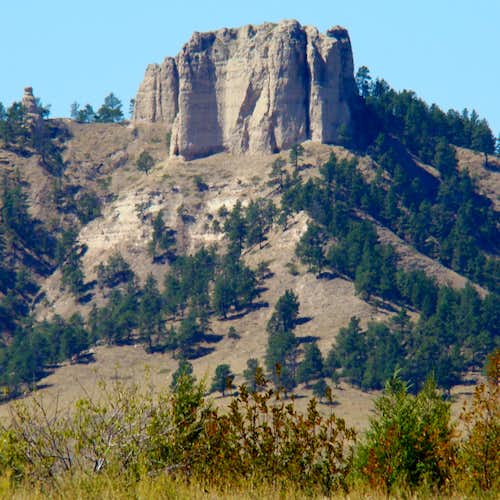 Much of the butte and canyon rock composition is a mixture of sandstone, silt stone, a type of a chalky limestone, and volcanic ash. In some places the composition has been cemented together moderately well by nature. But in most places, it is rather soft or crumbly - hardly what a technical climber would want to place an anchor into. Also, using trees for anchors is not a good idea because the root systems are often very horizontal, as evidenced by those you will see blown over. Climbers will find this is not a good area for technical climbing. Careful rock scrambling is the best that can be done. There is no safe way to climb some summits, like Giant's Coffin Butte, Coffee Mill Butte or others like them. There are several summits that do offer some popular rock climbing routes and that are reasonably safe for those who practice safe climbing techniques. Those would include Lovers Leap, Steamboat Butte (Chadron State Park), Crown Butte at Ponderosa WMA, Barrel Butte, Steamboat Butte (Fort Robinson), Saddle Rock, some of the Red Cloud Buttes and Crow Butte (private land). Other private land summits would add to this list too. Dry stream beds in canyons can have pockets of sand that turn to the consistency of quicksand after rainfall. Because of fires, pine beetles and Winter Storm Atlas in 2013, falling tree dangers (snags) are very real in some areas, especially on windy days. Dehydration is a real hazard during warm weather. And, like so many other remote areas, people get lost sometimes. To check the latest weather forecasts & conditions, click on the link below and type in the location you wish to know about:

The wise hiker or climber will take into account all potential hazards and plan accordingly. 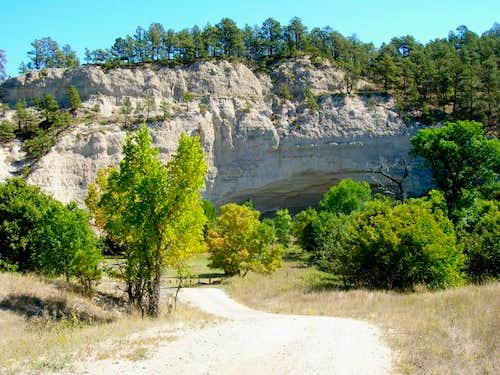 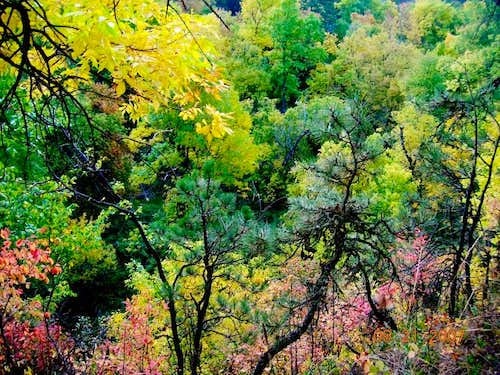 For more information, you may call any of the numbers below, or click on the site links: